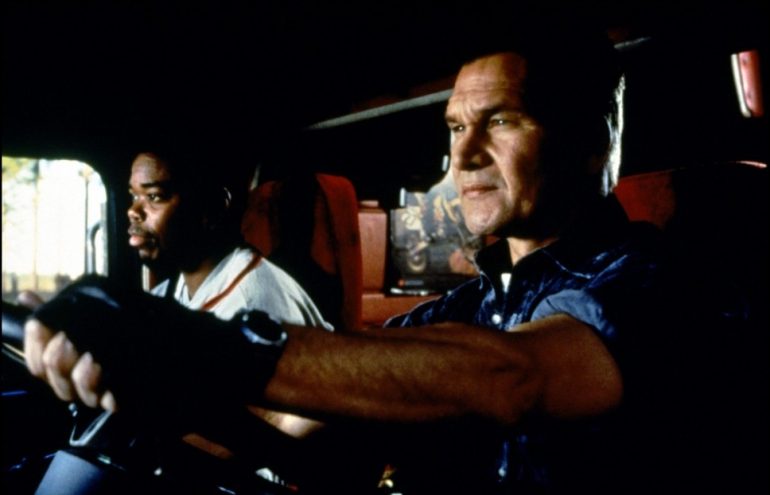 Patrick Swayze is easily one of the coolest movie stars ever. I’m 100% positive that the saying, ‘Women want him, men want to be him” was invented for him. There was nobody cooler than Swayze, especially during his impressive run of hits in the late ‘80s and early ‘90s. He was one of only a few guys that could pull off movies like Dirty Dancing (1987) and Ghost (1990) and still be a complete badass. It helps that he starred in two absolutely classic and iconic action movies ever in Road House (1989) and Point Break (1991).

For some reason, though, I don’t feel like he gets the recognition he deserves for his contributions to the action genre. While he doesn’t have the quantity of guys like Arnold or Sly, in my opinion, he more than makes up for that with the quality of his action films. I already mentioned Road House and Point Break (which I consider to be one of the best action movies ever made), and when you add in another classic, Red Dawn (1984), and a couple more solid entries in Next of Kin (1989) and the movie I’m reviewing here, Black Dog (1998), you’ve got an action filmography that anybody would be proud of.

In Black Dog, Swayze plays Jack Crews, a former truck driver recently released from prison, where he was serving time for vehicular manslaughter. As a result of his sentence, he lost his operator’s license and now is only able to work as a truck mechanic in a shop in New Jersey. He also finds out that his family’s house is on the verge of foreclosure, and he isn’t able to make the $9,000 needed to keep it. His saving grace comes in the form of an offer from his boss; if Jack drives one load from Atlanta back to New Jersey, his boss will pull some strings to get Jack his license back and Jack will earn $10,000. There’s a catch, though, as the transport is “off the books”. Obviously, this means the load is something illegal (it’s guns) and Jack will probably get caught up in a mess involving multiple hijacking attempts and law enforcement (he does), but everything will work out perfectly because he’s Patrick Friggin Swayze (It does. . . with a little help from Randy Travis).

I liked a lot of things about this movie, and there were a lot of little touches that made it unique and made it stand out from the crowd of cookie cutter, mid-budget 90s action movies. First and foremost, Patrick Swayze. Though his luxuriously eighties mane of blown out hair is gone in this one, the leading man charisma, relatable charm, and unattainable cool that made him a legend is more than present here. I think this is a perfect role for him too. Swayze is rugged enough to be immediately believable as a truck driver who has served prison time, yet he is still able to be sensitive enough to pull off the family man aspect of the character. On top of that, Swayze has a way of making his characters feel genuine, which helped here by making us sympathize with Jack. I had an easy time buying into the fact that he is truly a good man that is trying to do the right thing for his family, but got wrapped up into some shady business. There’s an incredible scene where Swayze pours gunpowder in a bullet wound on his bicep, then lights it on fire to cauterize the wound. It’s exactly the ridiculously manly kind of thing you’d see in his early career action movies, and I absolutely loved it!

I also like the rest of the cast. Truthfully, the characters are all pretty one dimensional, but either the writers were able to add some fun little details to the characters to make them interesting, or the actors were able to elevate the character through sheer likability. Seeing singer Meat Loaf as the crazy coupon clipping, bible quoting bad guy was a blast, and another singer, Randy Travis, did well as Swayze’s sidekick, Earl, who dreams of becoming a country music singer/songwriter. I also enjoyed the dynamic between FBI Agent Ford (Chares Dutton, Eye See You) and ATF Agent McClaren (Stephen Tobolowsky, Groundhog Day).

The action was very well done, which is no surprise given the director, Kevin Hooks, is the man behind the Wesley Snipes action classic Passenger 57 (1992).  While it is somewhat repetitive (it mostly consists of chase scene after chase scene), the setup for the different chases is varied enough to keep it interesting and it is all filmed very well. There are also some incredible stunts, including cars crashing, flipping, and exploding, as well as a pretty great fight on a moving semi truck.

Black Dog was Swayze’s last action film (though he did revisit the genre with a few action oriented TV shows in the 2000s) and, though I would consider it his weakest if I’m being honest, it is still a pretty solid overlooked ‘90s action movie. It’s not a very memorable movie, and I’m not sure it’s one that I will be in a hurry to rewatch, but it was entertaining enough, and Swayze is always a joy to watch so, if you haven’t seen this one, I would recommend you give it a shot.