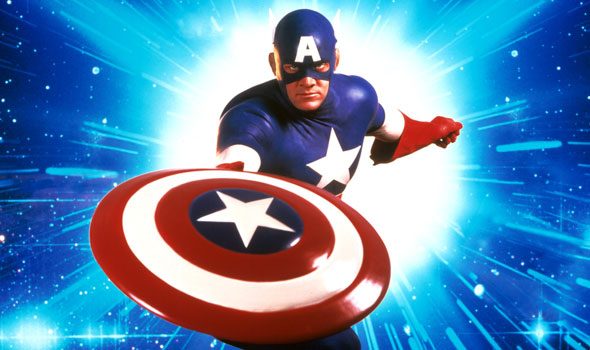 The Nazis develop a disfigured super soldier called the Red Skull (Scott Paulin). A Nazi scientist defects and helps perfect the formula with Captain America (Matt Salinger) before dying, taking the secret of the super soldier process with her. Succumbing to suspended animation after a fight with the Red Skull, Captain America wakes up in present day to finish what he started, fighting the still-alive Red Skull while coping with a changed world.

I’m sure the above synopsis may sound familiar to you if you read the comics or if you saw the 2011 blockbuster Captain America: The First Avenger. The origin story is done here in very broad strokes. Steve Rogers is mentioned to be chosen for the super soldier process, but you never see how or why. And Captain America gets dumped in the arctic on his first mission without having established a career being Captain America in WWII.

The fight between Captain America and the Red Skull at the 25 minute mark is pretty awesome. Captain America’s costume is accurate to the comics down to the red gloves and boots, the red, white, and blue shield and the feathers on his head. Red Skull’s makeup effects are impressive for their time. There’s a kick out of watching two icons from the comics come to life in a fairly accurate manner beating the hell out of each other, and it’s easily the best part of the movie, but it’s fleeting.

The origin up to Captain America being frozen is squeezed into the first 30 minutes to make way for all of the modern day parts, but one wonders why they rushed to get there. Everything from the moment the Captain is unfrozen onward to the climax is uneventful and boring. There are some thugs on bikes every once in a while and Steve Rogers visits his sweetheart to find her geriatric and the proceedings are devoid of action. Further, it’s revealed that Red Skull has been busy organizing the assassinations of J.F.K. and Martin Luther King in addition to getting plastic surgery to make himself more normal looking. So savor that Cap vs. Red Skull fight in the beginning of the movie, that’s the last you see of the Red Skull: how disappointing and unnecessary.

Skull’s henchmen consist of his normal looking daughter and her friends who are bland and devoid of any gimmicks or visual design that would make them distinguishable and unique, further throwing a blanket of mediocrity over the movie. Cap’s fight with Red Skull at the end is okay only because you get to see the Captain America costume and shield in action one last time.

Matt Salinger’s line delivery as Captain America is rather insipid, making Cap sound whiney. The script and direction don’t help either. Twice in the movie, Captain America is riding in a car with someone, complains that he’s going to be sick and that they should pull over, gets out with the concerned driver hovering over him, then runs back to the car and drives off leaving the driver stranded. Would Captain America do that? Would you trust this man to save the planet? It’s out-of-character nonsense like that in addition to a lot of the who-cares proceedings (trying to find out who the Red Skull is – um, he’s the ugly villain in the heavily patrolled castle stronghold!!) that really knock this movie down a few pegs in the entertainment department.

Ronny Cox as the President of the United States and Ned Beatty as a report are okay, but Captain America is only good for two things: the first Cap/Skull fight and Cap’s comic-accurate costume (complete with feathers!). Watch if you’re extremely curious.