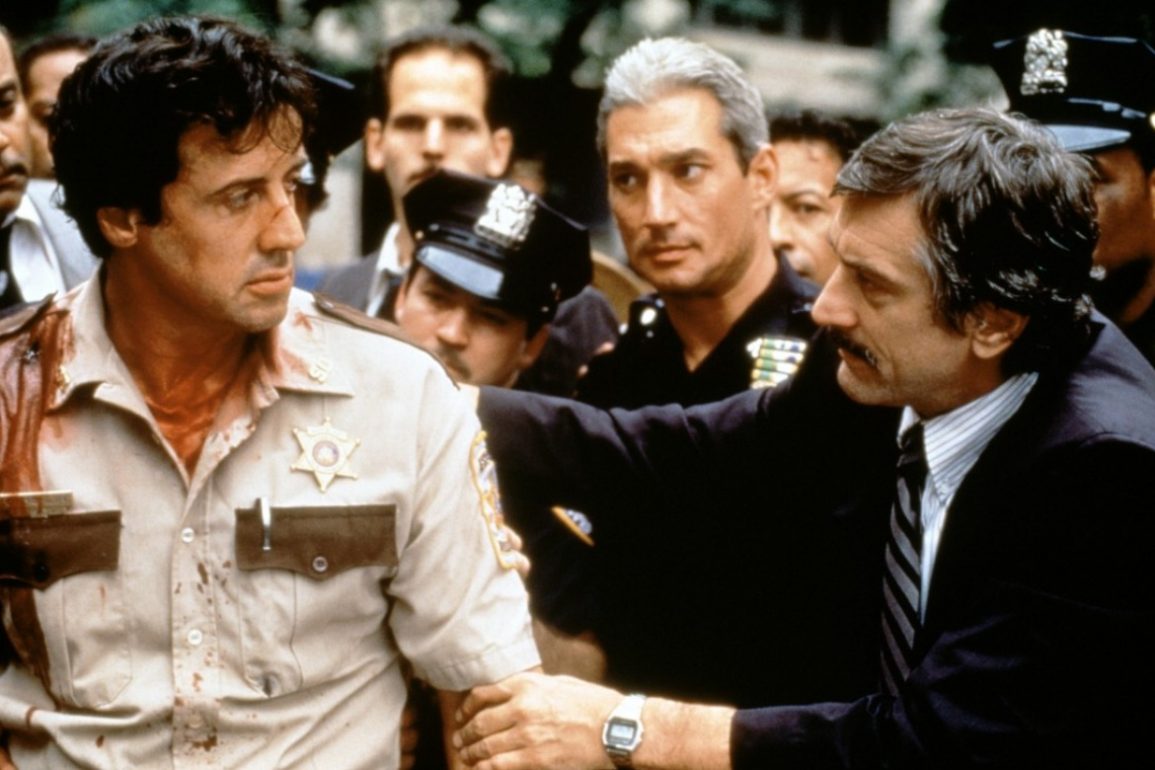 There is something special about the movies that take place in quiet American towns that have some dirty and often bloody secrets. You know the type; Stephen King frequently uses these in his novels and ‘Twin Peaks’ is another classic example.

‘Cop Land’ is basically a story of a quiet town with skeletons in the closet (a whole goddamn graveyard of them) with a question of ‘who watches the watchmen?’ being central to the movie’s main theme. ‘Cop Land’ takes place in the city of Garrison, which is inhabited by a large number of predominantly corrupt cops led by Ray Donlan (Harvey Keitel). The town has its own law enforcement, which has half-deaf sheriff Freddy Heflin (Sylvester Stallone) worshiping local cops, yet only really being friends with Gary Figgis (Ray Liotta), a washed-up policeman and part of Donlan’s crew. Robert Patrick stars as Keitel’s right-hand man and has a mustache of a 70s porn star and Peter Berg plays yet another of Harvey’s henchmen. Moreover, Sly’s acting is universally acknowledged as one of his best performances and is easily the most interesting thing about ‘Cop Land’. Stallone truly was heavily invested in this movie, even gaining 20 kilos so that he would be a more believable beat-down and unhappy sheriff. I bet Mickey Goldmill would have been enraged by this.

The most important thing about Stallone’s character is that the man is not really a cop – sure, he has a badge and a gun, but all he ever does is deal with extremely minor felonies and writing tickets. Well, one would guess, there is no room for criminals in a cop land, right? Wrong. Internal affairs officer Moe Tilden (Robert De Niro), who is as unpleasant as Internal affairs officers always are, approaches Sly and tells him that cops are the true criminals, Donlan and his associates being on Mafia’s payroll and that the whole city is safe haven for dirty police officers. There is also a romantic subplot – Heflin is deaf in one ear after he rescued Peter Berg’s wife Liz years ago, yet didn’t get the girl and has to stand by as she is abused and gets cheated on by her husband. The two definitely have chemistry and it’s obvious they have feelings for each other, but both sadly and silently acknowledge that nothing can happen between them.

So, here is the set up. The movie begins with officer Murray ‘Superboy’ Babitch (Michael Rapaport), Donlan’s step-nephew, shooting and killing two African-American junkies, after one of them points a steering-wheel lock at him, which Murray mistakes for a machine gun. Truth to be told, from the viewer’s perspective it really does look like a machine gun. Fearing reprisals, Babitch fakes his suicide and goes into hiding, sheltered by Donlan in Garrison. The situation is rather intense, with the media and civil rights activists calling for Babitch’s head, Tilden trying to put Ray’s crew behind the bars and the NYPD trying to sweep the whole thing under the carpet. Sly’s Heflin gets involved in this mess, even though he is a joke to all of the Donlan’s crew save for Liotta. Freddy Heflin is a man, who is torn between loyalty to the people he idolizes and his desire to be a real cop and his hunger for justice.

All in all, ‘Cop Land’ is not much of an action movie, aside from the final shootout and an obligatory 90s strip club scene in the very beginning. I, for one, am very sorry, I was born the same year ‘Cop Land’ was released and, thus, will never get to visit a true 90s strip club. They always look like fun.

Aside from the All-Star cast you have a lot of characters from ‘The Sopranos’ appearing. Tony Sirico (Paulie) plays a mob boss, Carlo Gervasi and Artie Bucco are cops, Edie Falco (Carmela) is in the bomb squad, Janeane Garofalo as Sly’s colleague and there are also Beansie Gaeta and agent Cubitoso appearing in minor roles. Moreover, Frank Vincent gets to tell Sly a couple of things. I’ll admit this just between you and me; I feel incredibly intimidated by Frank Vincent whenever he appears on screen, however small his role is. I always expect him to go into full Shah of Iran mode on someone. Truth to be told, I wondered whether he would say something like ‘five fuckin’ police departments and we got this pygmy sheriff’s thing over in Jersey’ or claiming Carmine called Stallone ‘a glorified boxer’. By the way, this movie totally could have had him ordering some junior police officer to go and ‘get your shinebox’. I guess, even a total boss like Frank Vincent has to compromise. No more, Butchie, no more of this. Damn, I’ve been re-watching ‘The Sopranos’ way more than I should have. Then again, who am I kidding, Tony Soprano is never going give up that fucking animal Blundetto. OK, on with the ‘Cop Land’. But just so you know, I think in an alternate universe there is a perfect mob movie with Sly starring as a hero, maybe a morally conflicted mafia hitman, and Frank Vincent playing an affably evil old school Don.

In the end, it seems like ‘Cop Land’ just tries to incorporate so many subplots over such a short due of time we don’t really get to see the whole picture. I mean, the romance between Freddy and Liz never really gets resolved – do they get together in the end or not? We don’t really get to see, just as a lot of characters don’t have as much screentime as they truly deserve, thus, leaving a lot of questions unanswered. Such a movie would have been better off if remade as a TV series, so that every actor would get an opportunity to shine and we would have more interactions between enjoyable characters. I can also see ‘Cop Land’ as a novel with multiple POVs, yet, alas, this movie is the only thing we have for real.

Overall, this film is a decent neo-noir crime drama, which doesn’t live up to its full potential. It is not bad, the premise is fairly unique, the acting is superb and the internal conflict of the main character is very touching. Since there are no scraps in my scrapbook left, I’m off to learn more badass quotes and hope that one day I’ll get the chance to use them in real life.