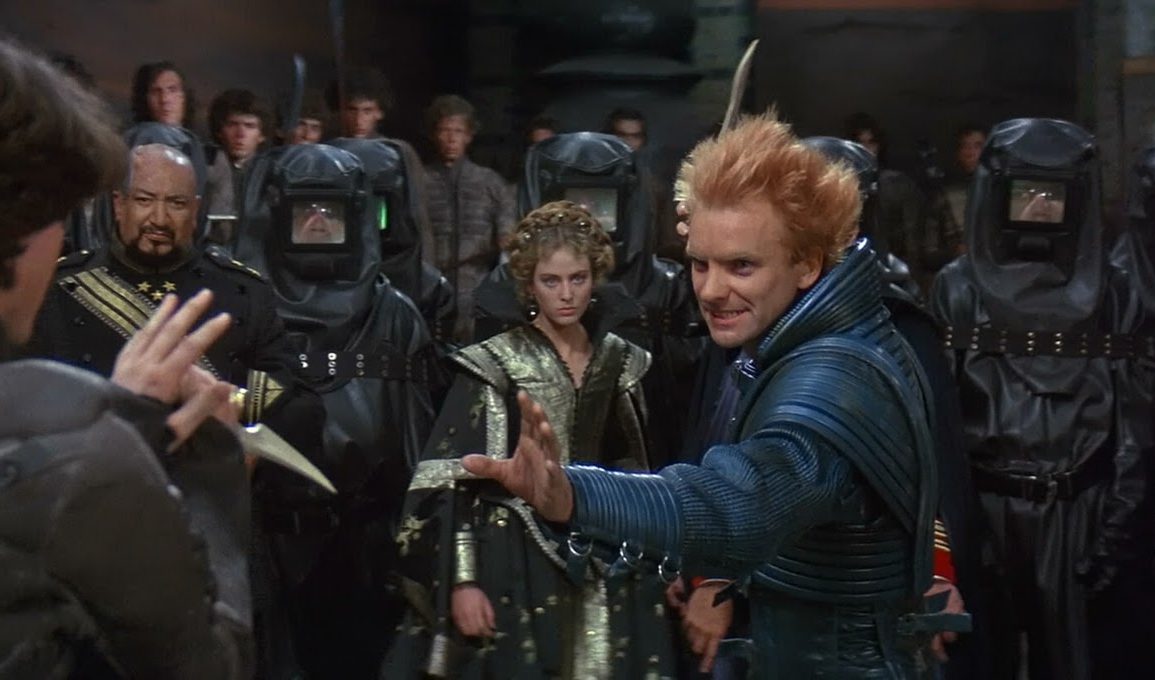 When you watch a David Lynch film, you know the default setting is bonkers.  Having laboured through Twin Peaks: The Return last year, I am literally ready for anything this mad professor can throw at me.   He is a genius, and there is no film maker alive who can match his ability to create incredible visuals that are innovative and memorable.

Such is the case with his interpretation of Dune, the modern American classic first novel in a series by Frank Herbert.  Many huge themes are threaded through Herbert’s books, and doing that justice is a gargantuan task for any film maker.

Lynch’s approach was to create an 80s rock opera fantasy with on screen technology that looked like it came from the late nineteenth century.  The soundtrack was performed by none other than Toto.  Yes, Toto.  As in “I’ve blessed the rains down in Aaaafricaaa.”

So anyone expecting a Star Wars style space opera is in for a rude awakening.  This really is a bizarre film.  But let’s be clear, the source material is also really bizarre.  There are giant desert worms, the main villain is a fat guy who floats and his chosen assassin in the film is Sting.  I kid you not.  And Sting has a haircut that looks like he just stuck his fingers in an electric socket.

Paul Atreides, played gamely by Lynch’s muse Kyle MacLachlan is the son of Duke Leto Atreides of the planet Caladan.  There is a power struggle afoot in this universe between the Atreides family and the Harkonnens.  Baron Vladimir Harkonnen (played with manic glee by Kenneth McMillan) is the floating villain, and a fierce opponent of House Atreides.  He is secretly plotting with Emperor Shaddam IV who rules this universe, against the Atreides family.  They are in turn controlled by a slug-like entity that lives in a rectangular steam bath.  Or maybe it is a kettle of some sort.

They all seek control of a vital resource called the spice ‘Melange’, which apparently extends life and can fold space.  (You might want to try legalizing THAT, Mr Trudeau).  Anyway, Paul is sent to the planet Arrakis, known locally as Dune to rule with his father on behalf of his House.  There is too much other stuff to go into detail about, other than to say that Paul Atreides may or may not be the Messiah.  And Dune has enormous worms that live in the sand.

The action in this movie is sporadic.  The film generally moves at too slow a pace, but there are a few impressive battle sequences which display the film’s huge sense of scale very well.  The individual fight scenes are not bad, particularly the one where Paul Atreides battles the Harkonnen’s Feyd Rautha (Sting).  But it is apparent this is not in Lynch’s comfort zone.  He focuses on the astounding visuals and atmosphere.  It will be interesting to see Denis Villeneuve’s approach in his upcoming version in the next couple of years.

Overall, the film is massively ambitious with some visual sequences that stay with you afterwards.    Many of the special effects inevitably have dated (this was made in 1984).  However the set and costume design still look fabulous and outlandish.  You can get lost in some of the quasi-spiritual musings: Kwisatz Haderach and Bene Gesserit and other baffling concepts will bemuse those uninitiated by the dense novels.

However, this is what I admire about David Lynch.  He shows you something you will not have seen before.  And that is very rare these days.