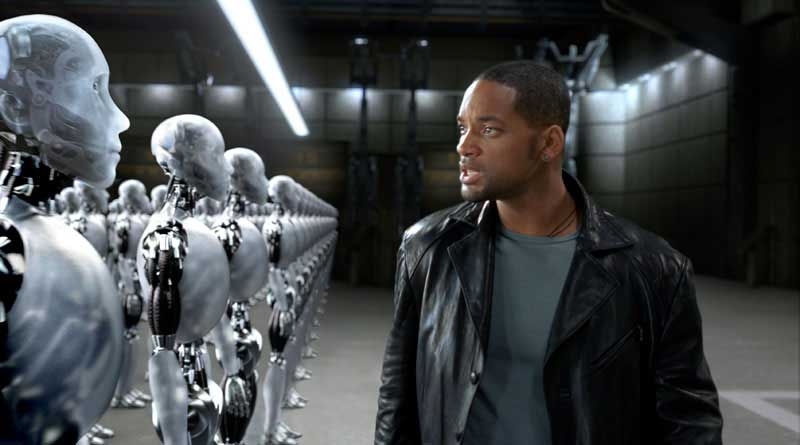 Plot: In 2035, highly intelligent robots fill public service positions throughout the world, operating under three rules to keep humans safe. Despite his dark history with robotics, Detective Del Spooner (Will Smith) investigates the alleged suicide of U.S. Robotics founder Alfred Lanning (James Cromwell) and believes that a human-like robot (Alan Tudyk) murdered him. With the help of a robot expert (Bridget Moynahan), Spooner discovers a conspiracy that may enslave the human race.

Inspired by the works of Isaac Asimov I’ve always liked this film, ever since I saw this in the theater in 2004. I, Robot explores themes of morality and ethics so it’s more than your average Will Smith action movie and that’s the kind of film that I like sometimes.

The story flows well for the most part and there are some interesting ideas that are on display here and they work.

Will Smith is the same as he usually is but Spooner is more interesting than his typical wise-ass characters. Alan Tudyk practically steals this film altogether making us genuinely care about his character Sonny.

The action is also well done, especially the final battle which is very memorable and satisfying; the CG actually holds up pretty well however, some shots have dated, but for the most part it’s pretty good.

The score by Marco Beltrami is impressive; though not one of my favorite scores from him, it fits with the tone of the film.

I only have 2 problems with I, Robot; one is Shia Labeouf who thankfully isn’t in the film that much but when he is, it’s rather pointless. The second problem is it does slow down in the middle, but it’s nothing major and doesn’t detract from the entertainment value.

Overall, I Robot is an enjoyable action film that has a good cast, an engaging story, has some impressive action, decent effects that still hold up, and has a good score. Definitely recommend it if you haven’t seen it!