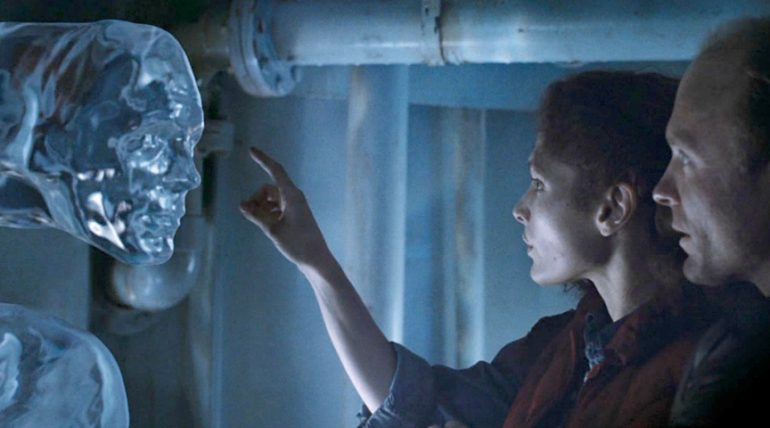 Plot: The USS Montana, a nuclear submarine runs straight into an underwater cliff after an encounter with what they believe was a new beyond state-of-the-art Russian submersible. The Navy dispatches a SEAL team (lead by Michael Biehn) to observe and report the situation. Meanwhile, A deep sea oil drilling platform run by the estranged Brigman’s, Bud and Lindsey (Ed Harris and Mary Elizabeth Mastrantonio)are called to help search the sub for any survivors. During their mission, they discover that they are not alone.

I figured I’d look back at this film since it just celebrated its 30th anniversary.

This is one of James Cameron’s best films. The way he combines drama, suspense, action and comedy blends so well together. While not in the same league as The Terminator or Aliens, The Abyss still manages to produce terrific performances, fantastic visual effects that still hold up to this day and a story that is tension-filled with great atmosphere.

Ed Harris as Bud Brigman is fantastic; the ranges of emotion that he shows is so powerful and very realistic. Mary Elizabeth Mastrantonio is also very good as Lindsay. Her character is a strong woman who can defend herself, but still shows that she is still human. Michael Biehn is equally fantastic as Lt. Coffey; I love the way he portrays this character who starts to lose it once the aliens come; his character is very memorable and helps bring tension to the chaos.

The rest of the supporting cast do very well in their roles and are equally as memorable as the leads.

The score by Alan Silvestri is very underrated and is used incredibly well when it needs to.

Both versions either if it’s the theatrical or special edition version are great. The only problem I had with this film is the treatment of The other Navy SEALs (except for one); they aren’t given any character development or personality.

Either way, The Abyss is one of my favorite films of all time and if you haven’t seen it, do yourself a favor and rent this film and give it a chance. You won’t regret it. I’m hoping this gets a Blu-ray someday, it deserves one.