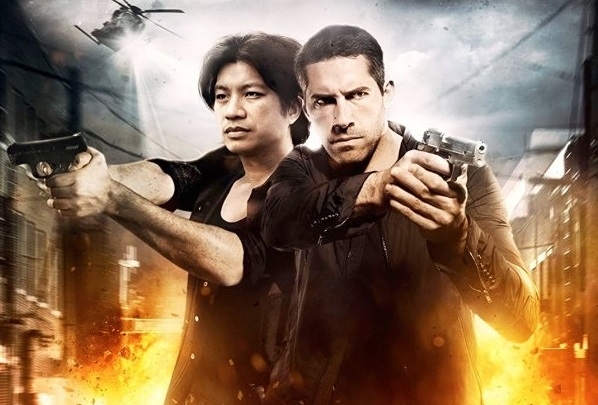 Rather criticized by being misadvertised in every country (some posters show Scott Adkins as the main star, others show supporting actor Gay Daniels with a machine gun he never uses in the actual film and the UK has this claiming to be a sequel to the Denzel Washington-Mark Wahlberg buddy film 2 Guns; all inaccurate on various accounts) and not appealing to even many forgiving B-action movie fans, this film still has lots going for it. I’d even find this the most beautiful crime film of 2015 and I don’t care if I’m the only person on the planet who thinks that way; I’ll start backing it up right now!

So many critics gave this film the shaft by nitpicking that it felt like two totally different movies, mainly because it was edited from another festival contender. Having seen countless recuts of various films, I felt like this film ultimately succeeded (especially when viewing this back-to-back with it’s original film it was edited from, Angels, afterwards) as the new added scenes and overall stylish editing don’t hurt the overall narrative. I know what’s going on at all times and being a Noir lover, I don’t have the typical impatient attitude that most moviegoers have with films of this type. This was made for more old-fashioned crowds using some of today’s stylish influences as well. We’ve already seen countless other iterations of various stories so this film doesn’t try to do anything different except showcase the tragedy, revenge and mystery reveals in a vivid way. It might not be original but it does not overstay its welcome unless you’re one of those ADD moviegoers who insists on superheroes being the main star or want every movie to be like another filmmaker’s work despite finding that derivative otherwise. Kaos lives and breathes Noir genre so he displays such characteristics in every scene, moment and transition. Since Noir/Neo-Noir is a style, it is therefore the main star of this film and it is relentless yet consistent in its violent mood but hardly rushed or incoherent despite initially built up complexity.

I’ll go on the record by saying that while Scott Adkin’s villain might not have been part of the film initially, his scenes and character don’t hurt the momentum of the plot or pacing at all and he actually turns in one of his easily best roles to date here. Everyone likes to complain about how films are made but none of the reviews seem to pinpoint what does or doesn’t work in the actual film. I’d say if anything some of the stripper nudity was gratuitous but it always is so what’s the real problem here? The fact that the main characters are stock genre characters? That it’s rather moody at all times? That it’s similar to other Thailand shot and set films from around this same time? I’m sorry that no one truly found it interesting but I have to say that I don’t mind something different and if there’s one thing I like more than just another Action film, it’s an Action-Crime film. And if there’s one thing I like more than Action-Crime films, it’s Action-Crime Neo-Noir films!

Many were saying this was boring but since this rarely slowed down, I didn’t see anything to be bored by, let alone risk finding dull. Some people like a film that’s more original or less stylish but I find this a worthy compromise. The main key is that I buy into both character’s quests and by making it to where the lawman will do things the right way and the angry father will do things outside the law may have been a done-before aspect but this film establishes that the only thing more personal than the victim being avenged is the duo’s friendship which unites them together in this quest.

The two villains were both rather intriguing because A) it’s not who you think and B) neither them nor their various connected criminal affiliates seem remotely related at first. Personally, I like it when a film adds extra layers in both the truth seeking and the amount of villains to dispose of. It helps that not much time is spent crying over the victim. Some were finding the protagonist duo to be unemotional or not as fleshed out but I don’t see a reason to flesh them out more as their friendship is established in their first scene together and they show different emotions there but by the time they realize Johnny’s daughter is dead, all bets are off and nothing else matters. And despite Johnny working outside the law, he’s hardly just another anti-hero; if anything he’s simply a rule-breaker unafraid of getting his hands dirty.

Enough about me defending the main deadly duo so let’s talk about Adkin’s Steven: he’s vicious within the first scene he’s in and we never have any doubt that he’s got the next order of his murder-filled business on his mind but is he the main guy behind Johnny’s daughter’s death? Find out and see! Adkins really did own each scene he was on but, unlike most people, I never had any suspicion that he was the main dude let alone necessarily the main bad guy per say as he was clearly always having something to hide, let alone had an overall ulterior motive in each scene. Why jump to conclusions when that’s the movie’s job being this is a complex, action-packed revenge mystery? All the fights are rather visible, bloody well-done (no pun) and expertly shot but Adkins especially gets to display some fun stuff in all his scenes for the most part. Gary Daniels, while not in an Action role, is hardly wasted and easily gives the best actual performance of his career. Don’t get me wrong- he was the original Scott Adkins before it was cool having been a rather stunning UK fighter and Action leading man but he truly goes to a rather dark yet unpredictable place in this film and it’s absolutely worth seeing. This is not a bait-and-switch nor a waste of his talent. It’s not even the equivalent of seeing a singer try something different that their fanbase didn’t ever want them to try doing, it’s only something different yet very well-done and because he is both a part of one of the many surprising plot twists and is unrecognizable. I honestly didn’t know this man had this much depth outside of punching, kicking and being vicious with his occasional retorts but it’s just the magic of filmmaking where you can show a person who you think you know (but truly don’t) in a different light.

All I can say to haters is to quote from the film itself: “Go take your 5% and go fuck yourself!” On an actual note, I do have to say that this film deserves a second chance and not to be buried and long forgotten. Watch it in a Scott Adkins or Gary Daniels marathon, watch it to see what Dustin Nguyen did years after hit TV show roles on Vanishing Son and 21 Jump Street, watch it to view a rather complex yet rather organized Neo-Noir. It’s not bizarre or campy, it’s just right! Now, stop going to movies and asking them to be what you want them to be and take them for what they actually are, let alone give them the credit they absolutely earned. Having seen both versions of this film, I have to say I surprisingly prefer this version of the film, not only because I get Adkins and more action but also because of the change-ups in pacing, scenes being reorganized flows better for me and the slight changes to both lead characters feel more welcome. That and there’s some occasionally more fancy yet rather eye-catching edits and far more intense film score blazing at all times. This isn’t junk food, this is a fancy first-class meal (AKA the overall look of the film), mixed with 100 blowjobs and kisses each (AKA the content itself), served alongside some sweat-inducing thrills (the excitement factor) and some deep philosophy (the dramatic reflections in the second half of the film). Eat it up but stop bashing this diamond in the rough. Even if it’s not your highly prized gem, it’s still a keeper by understanding what genre it’s a part of and doing its best to earn its very keep!