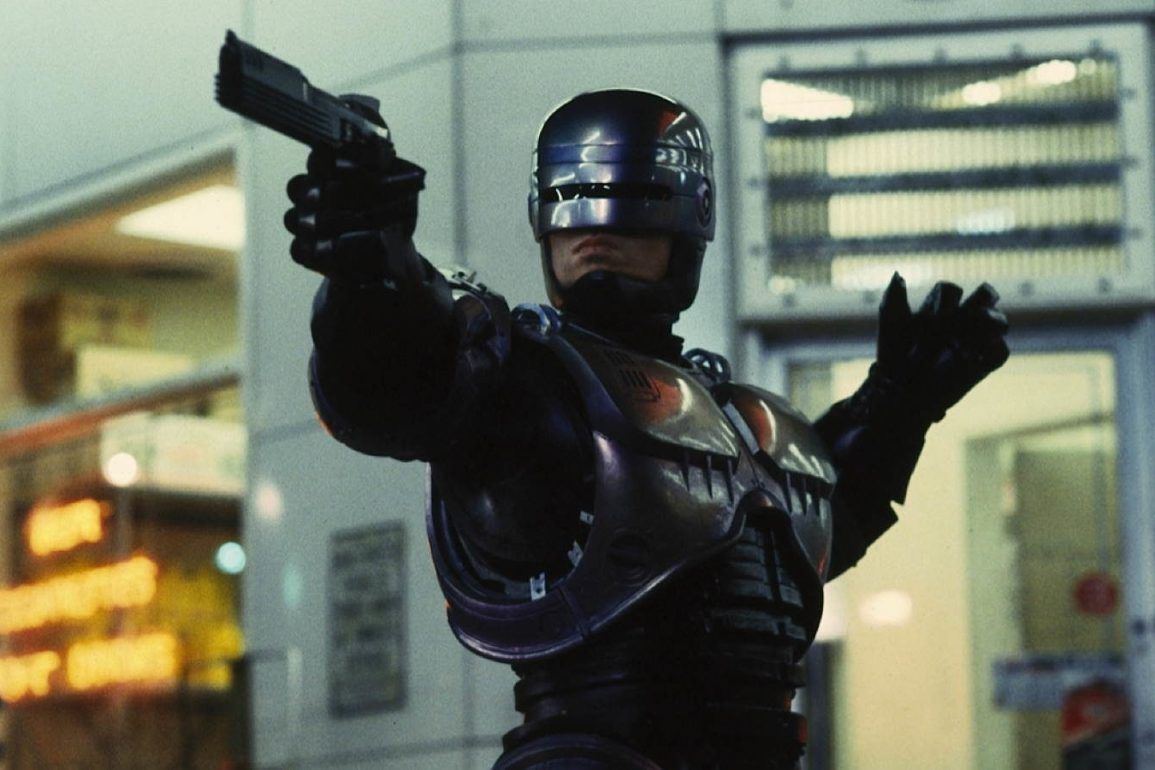 Picture if you will a future dystopian society where crime is at an all-time high.  Finding ourselves in the large Midwestern city of Detroit, we find a different world than what we’ve become accustomed to.  Police services have become privatized, a large corporation runs the city and designer drugs like “Nuke” are rampant.  Such a world would need a new type of law enforcement – someone like Robocop.

Paul Verhoeven’s imaginative and legendary production set new standards for both action films and action heroes when it debuted in 1987.  Robocop’s popularity transcended the film he appeared in, and he appeared on the Oscars, in video games, and yes, even served as a wrestler’s bodyguard for a while.  While the popularity of the first film is undeniable, you’re likely to find many people also have fond thoughts of its sequel, even if it serves as more of a cult film than the famous first one.  Which one is better?  Let the debate begin… 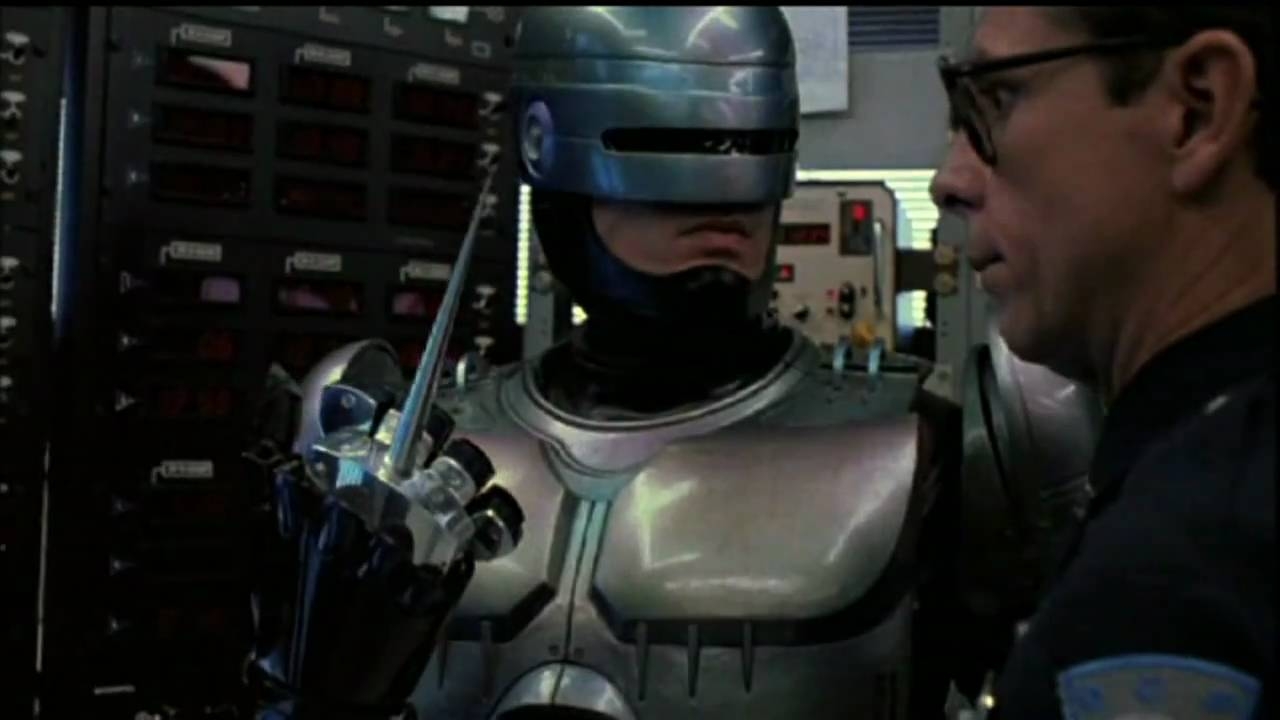 The Story: A lot is made about the violence and how awesome Robocop himself is, and don’t get me wrong, all that stuff is great.  However, when you watch Robocop multiple times, you get a real appreciation for great the actual story is.  It plays along perfectly with Verhoeven’s string of movies, which are a combination of body horror and techno-paranoia.  This movie is a perfect example of those themes, but unlike some of his other movies, you really empathize with the main character. In fact, of all the Verhoeven movies I’ve seen, the Robocop character may be the most sympathetic protagonist featured.  When he’s walking through Alex Murphy’s old house, you can detect the raw emotion, even though Robocop’s face remains expressionless through the film.  It’s that sort of thing that adds another layer to the movie, while still maintaining the central themes.

The Characters: Robocop is great, so let me just get that out of the way.  It’s the secondary characters who shine as well, though.  The Clarence Boddicker character is one of the best secondary villains in screen history, simply because he doesn’t look like a criminal; no tats, no piercings, no weird hair.  He looks like a suburban dad, which is way scarier, and I think, the entire point of the casting. Ronny Cox always plays a good heavy, but the man who strips Robocop of his humanity is actually Bob Jones, the ambitious executive played by Miguel Ferrer.  You could make the case that Bob is the real villain in the movie, he’s so uncaring, has such callous disregard for the human that once was Alex Murphy, coldly telling the techs building Robocop to lose Murphy’s arm, even though they can salvage it, he is the character who strips Robocop of any humanity, and leads him down his path to being the replacement for flesh-and-blood humans.  It’s the nuance to the secondary characters that really make Robocop such a great film.

The Action: Oh yes, there is action, and a lot of it is pretty unsettling in its brutality.  Murphy getting his hand shot off by Boddicker, the massacre that ends Murphy’s life (a massacre that is repeated later in the film, a sequence that essentially turns Robocop back into Murphy), there is Robocop taking care of business at the start of his career, dealing with random hoods, there’s the chase scene at the beginning – yup, plenty of action.  The most unsettling part, though, is probably the end, when Emile gets mutated thanks to toxic waste and then disintegrated by Boddicker’s car, and then Boddicker reaching his own demise at the hands of Robocop’s information spike.  It’s that stark, unflinching violence that really marks this movie a cut above the dystopian future genre, because while those films generally have some sort of fantastical element about them; Robocop’s Detroit doesn’t look that different from ours, but you can tell that society is rotting and the human race has let things get out of hand.  It’s that familiarity with what we know today that makes the brutal actions of the characters all that more impactful. 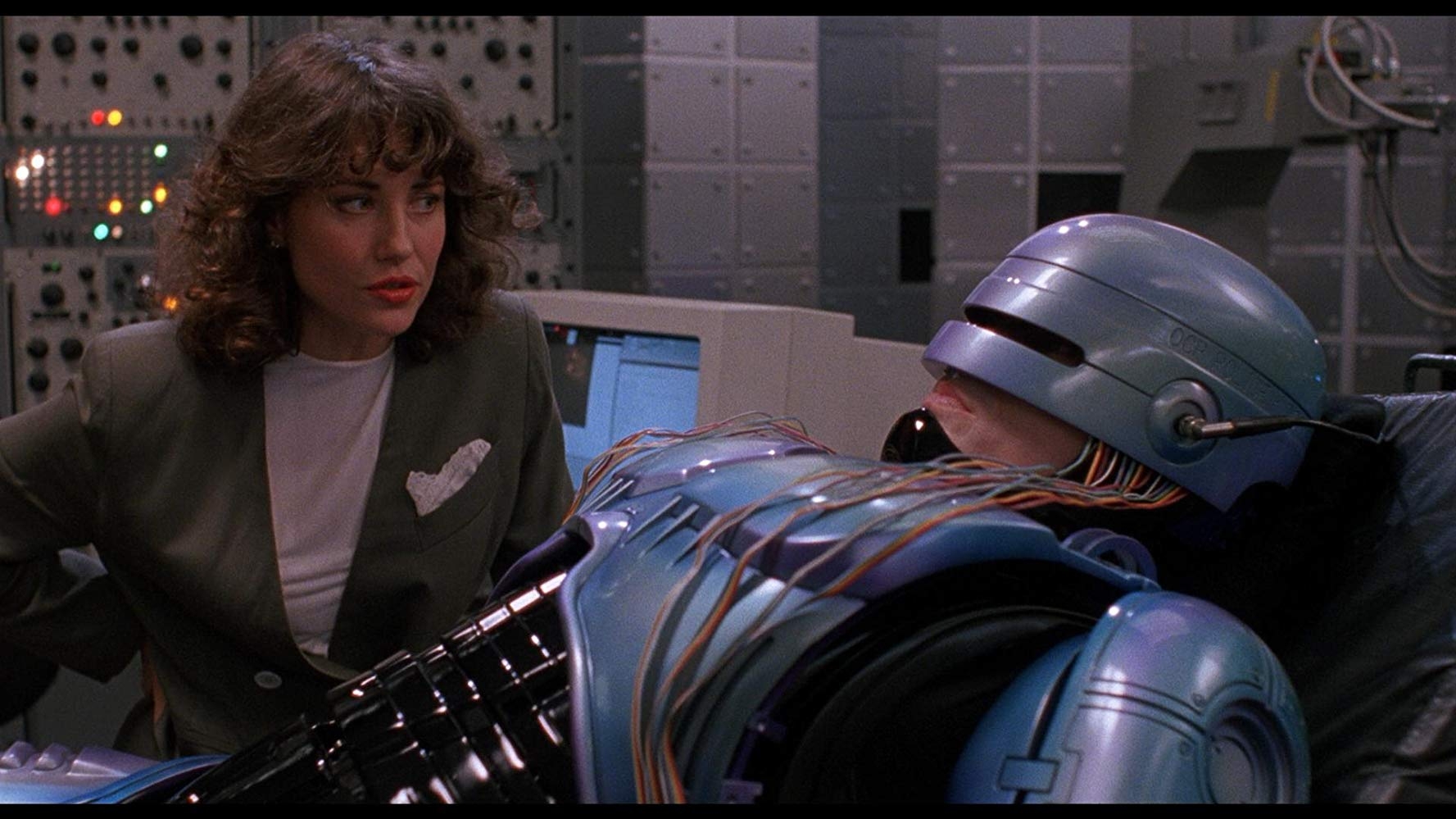 The Story: Believe it or not, I think this story is even darker than the first one.  While it does focus more on one aspect of criminal activity, drugs (and more specifically the designer narcotic “Nuke”), instead of general crime that the first film dealt with, you have a kid taking over a drug kingpin’s business, you have a new Robocop who is more inhuman than the original, the CEO of OCP has gone from kindly, yet clueless to overtly greedy and insensitive – the film takes all the nuance out of the first film and just drills the viewer with the storyline. It’s definitely not as clever as its predecessor, but to its credit, it still feels like the same world that the first film created, therefore it’s not totally out in left field, it just feels a lot more clunky and less deft.

Characters: The main new characters for this one are the villain Cain, the Mayor of Detroit, and the creator of the new Robocop, Dr. Faxx.  Tom Noonan plays Cain, and he does a decent job, considering he doesn’t really seem to have a lot to work with, he feels very much like a stock movie bad guy.  Make his young apprentice watch a vivisection of a cop, stare blankly at adversaries, etc. I actually really like the Mayor of Detroit in this one; it’s a cynical portrayal and the guy seems to have no problems accepting money from drug dealers to bail the city out and then acts morally outraged when Robocop 2 is unveiled as the new superhero, which is great.  Dr. Faxx is a less competent version of Bob Jones, nothing more, nothing less.  The original characters from the first film overshadow the new arrivals, which I guess is to be expected, even though you kind of wish a new character was developed enough to stand out.

Action: There’s plenty of action to make anyone happy in this film, even if it lacks the brutality of the first film.  There are a number of shootouts, and Robocop 2’s first appearance is particularly impressive.  I do wish that they were more graphic with the violence.  I saw the movie just recently again to write this post, but I can’t for the life of me remember one particularly graphically violent scene; it seems there was always a cutaway or darkness, or an off-screen murder.  It takes the teeth out of the story because part of the entire point of the first film was the graphic violence, to bring that level of realism to the story.  This entry definitely felt more like a standard action film than the genius of the first film. While Robocop is admittedly a hard act to follow, I wish the filmmakers had tried harder.

This one’s not even close.  Robocop is by far the superior film, bringing a gritty, urbane feel to what could have just been another slick action film taking place in the not-too-distant future.  Watching the film again, it’s easy to see why the movie is a classic; it brings together so many classic elements, not just of Verhoeven’s work, but also the paranoia and unease of where the human race is heading, and the conviction that humans will be replaced with robots (or cyborgs) when this terrible future is reached.  Robocop 2 fails to make the same impression its predecessor did, though it does continue the story and at least didn’t drop the ball to the point that it’s barely recognizable from the original.