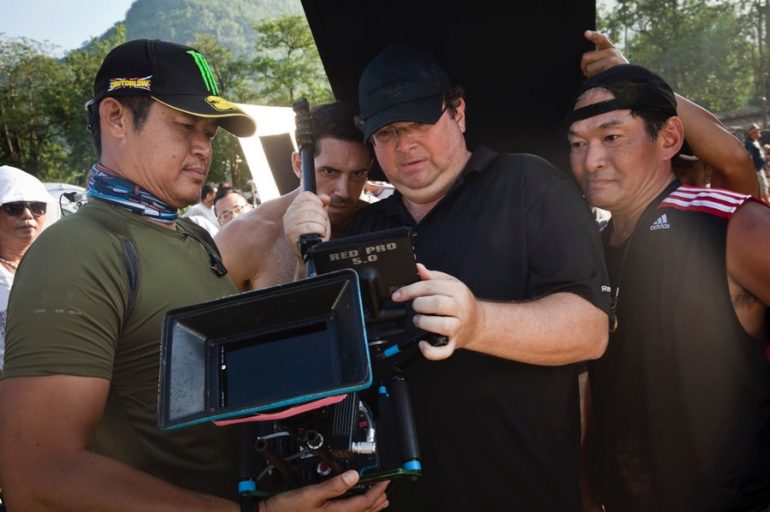 After interviewing the amazing Ann Truong, connecting with Katrina Grey, and purchasing the extended Blu-ray edition of Hard Target 2,  I had to have a sit down with the amazing Roel Reiné about the film. Both Ann and Katrina have told me that he was the best director they have ever worked for; so organized, and fastidious. Enough of my babbling, sit back, relax, get some tea, and take a hard trip back to Thailand for the shoot of Hard Target 2!

How much time was spent on principle photography in the open spaces in Hard Target 2?

I shot the whole movie in 20 or 21 days. That is the nature of the beast when you are doing low budget action movies. The budget was 4millionUSD, and we shot all over Thailand. Mainly in the north around Chiang Mai, it was a blast. Wait no haha, that was where we shot ‘Man With the Iron Fist’ there. We shot Hard Target 2 in and around Bangkok. We shot in a place a few hours south of Bangkok; there we shot all the jungles. If I remember correctly we spent 2 and a half weeks shooting in the jungle and we spent a week and a half shooting in Bangkok for the Thai city scenes, the fights, and the opening, and that material.

To give you an idea, the opening fight in Hard Target 2 (The Arena) I shot that in one day! (Ed Note, I was astonished, I asked for clarification) (Yes one day, and Scott (Adkins) he is just an incredible actor and fighter, he designed the whole opening fight sequence in the arena. He was a real trooper, of course for me I am running around with the camera it is tough, but for him it is even harder because he has to do every fucking thing and the acting and the fighting as well. He (Scott) was just an incredible person to work with.

Speaking of casting, your Hard Target 2 had something unique to a Scott Adkins film, a woman with heart and soul. I loved the casting of Ann Truong as the local village lady; I felt she added heart to the film without a clunky love story. How did you manage to wrap a heartfelt story around so much action?

Yes, having a script that works is so important, and having an actor (Ann) that knows performance, and it is easy to focus on that. I must say that of all my movies, my focus is always the story itself, the drama, and the human interaction. It is really never the action for me as a focal point, the action is easy, and the drama and the story telling is the tough part. That is the reason I enjoy my films watching them and making them, as the drama is the focus, and they work on that level. A lot of the action scenes I design myself, in the script it says there is a fight or a chase etc… Then together with the local stunt team in the case of Hard Target 2 the amazing Seng Stunt Team coordinator, I will decide on the design of the fight based on locations, things I think that is “cool” and based on things that a particular actor is good at. If you work with Scott, you know what he is good at, so it is advantageous to use that. Especially shooting in Thailand, I always use Seng Stunt Team. His team are real pros and they are behind the Ong Bak series. He is one of the best stunt coordinators I have ever worked with anywhere in the world.

With him we just go creative and see ‘what can we do here what can we do there’ then we design it. What I always do and that is why I can complete principal photography in such a short time 20 days Hard Target 2. It is important to do a lot of prep before hand, prep is the most important thing.

Mentioning prep, how much time did you have for preparation before the start of principal photography?

We had five weeks, it is rather short but if you are really thorough, and also Scott is, he came in two or three weeks before shooting. He started rehearsing on the fights. In the prep I will make all the decisions, then when you hit the set, we are ready. I also chose specific sets where I can do the drama, story, and emotion. I also chose the sets where I can have the action on location. This allows me to split the set, (Have two teams) between action and drama. We will set up an action scene, example it will take the team two hours to build the shot, or to build some complicated explosion or stunt rigging. Wile that set up is going on I will go to the drama side of the location shoot that dramatic scene with two or three cameras, then I leave one or two cameras with the action people to set up a complicated shot. When they (The action team) are ready to begin shooting I bring the other two cameras from the drama set, shooting with all four cameras in the action piece, and tell them how to reset it. This process takes about an hour or two to reset, during that time I go back to the drama, so it is a continual process.

Wow, what an amazing insight, really saving time. Basically you answered my next question, now we move to one of my favorite scenes in Hard Target 2, a real guilty pleasure. The fight on the train with the sultry Ann Truong and the dangerous Rhona Mitra. Discuss the set up and execution of the fight, with regards to set up time and filming conditions.

With these scenes especially when dealing with actors who are not seasoned and trained fighters like Scott is. Ann and Rhona are not ‘trained’ fighters (Ed Note- Roel was also talking about screen fighting, Ann knows how to fight, but this is different dynamic) what you had was two doubles that were synchronizing and mirroring the fights. The actors in turn look at the doubles and mirror the fights from the doubles. That is how I shot that sequence. I recall that we shot the sequence in only one day, it was pretty tough as it was so hot (nearing or exceeding 100 degrees). Both actresses were real troupers and gave it their all. They went for it hard. For a few of the spot gags (stunts like falling off the train and between the trains) because when Rhona Mitra’s character is kicked between the trains it is a really dangerous sequence. That is a stunt guy double actually bending into that position. It was a very dangerous stunt.

Speaking of the fights in Hard Target 2, there is a girl on guy fight, and there is a tricky fight sequence with Rhona and Scott Adkins. Describe the dynamic of the cunning vs brawn fight, girl vs guy type fight.

The good thing about Scott Adkins is he then runs that moment. He is the one telling Rhona to really hit me full on as hard as you can. He was really pushing her to use her full power. There was full contact that is what made the fight believable. Yeah that was really cool, as it made Rhona aware of what she could do, she was also daring Scott to come closer and fight and do the same thing. It was really a team effort between the two of them to make it really look good. My job as a director on that sequence was relatively easy just to point the camera haha, because it is them doing this. The only thing I could do is come up with a cool ending where Scott kicks her through some wood planks. The fight though is completely managed by Scott and Rhona themselves. The choreography was executed by Seng and his team; they designed the fight but ultimately as with any fight it is up to the two actors to make it believable. It was up to them to make it work and they did, they both really went for it.

Chat about working with Jeeja and doing the final fight on the bridge in Hard Target 2. Must have been amazing to work with great action people for the climactic fight in the film.

For me it was an absolute blast, Jeeja is such a famous star in Thailand. I really liked her films. Chocolate was amazing. Seng and she know each other. In one of the rehearsals that Scott was there she came to the rehearsal and I met her and said I was a big fan and kind of like a joke I said “hey, do you want to come to the movie and do a little thing, some action?” She was like ‘yeah, why not’ . So that was kind of how it went. Let’s put her in the action and let’s go for it. Katsu is also a fight choreographer he is the guy who ‘dances’ with her during the fight; the two of them are also in one of the Thai films (Chocolate). Since they worked together previously, they both came up with some unique moves, then Seng and Scott came up with some ideas, so it was a real collaboration on the final fight sequence designing that part of the fight.

Talk about the bridge location for the final fight.

I remember I really wanted to do this whole ending on the roof of this building in Bangkok, and we actually designed it for that. We then lost the location, which was at the time a real bummer. The local producer Chris Lowenstein, said “hey, I know this really cool bridge”. He showed me pictures, then I went scouting with him to the bridge. When I saw the bridge I thought wow it is spectacular.

I thought the bridge was huge gave a massive scope to the ending. Probably never would have realized that on the rooftop location.

Thanks for the incredible insight to Hard Target 2.