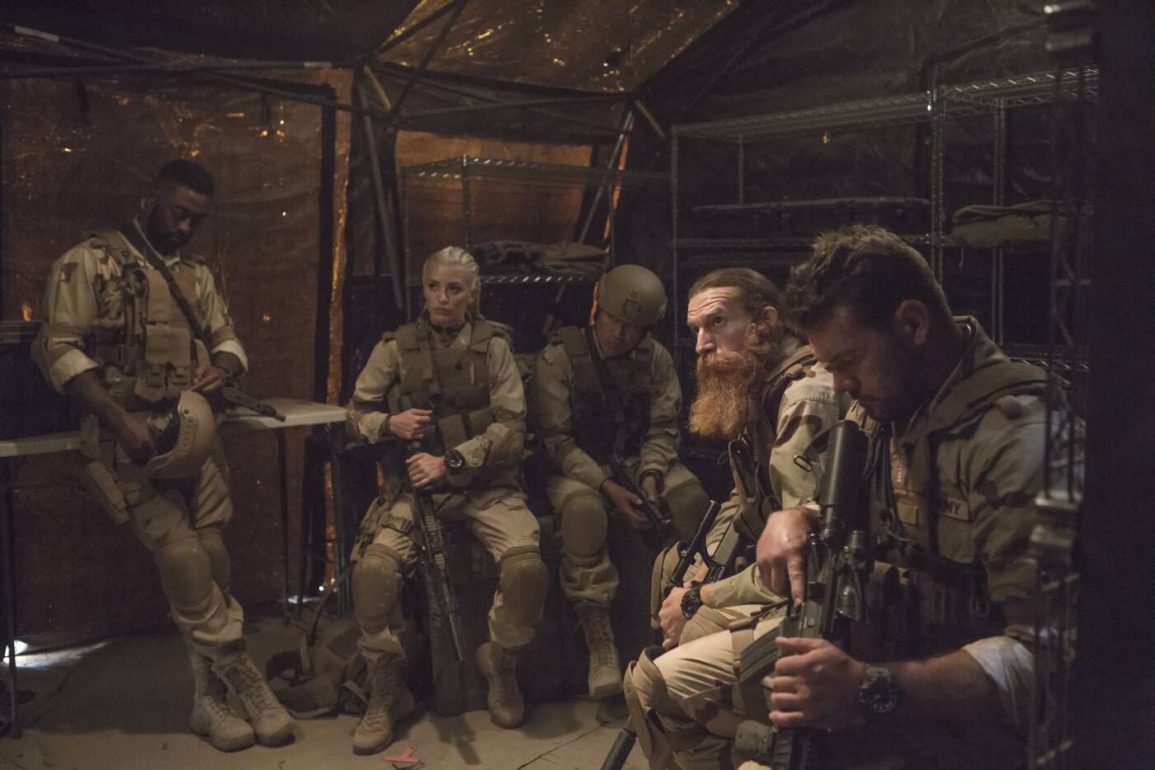 Sub-par in every single way

The middle entry in a three-part military action series, Rogue Warfare: The Hunt gets too bogged down by questionable directing choices, and mid-story bloat, to be an effective time-waster.

Plot: The next story of the Rogue trilogy; Under orders from the U.S. president, a team of elite soldiers go behind enemy lines to free their captive leader from terrorists.

Review: Nostalgia is a strange state of mind, and one that I was pretty certain I was immune to. Viewing the past through rose-colored glasses seems like a damn fine way to miss the present and be unprepared for the future. As such, I rarely gaze backwards with anything less than a critical eye. Except, it would seem, when it comes to beloved movies from my youth. For some reason, those gems of yesteryear are immune to my “older & wiser” self.

Take Commando for instance. It’s one of the established “classic” Arnie films, filled the brim with one-liners, wonderful kills, shameless overacting, and enough expended ammo to have toppled a small nation. It’s male fantasy in the most ridiculous and glorious of ways; and I love every single second of it. Sure, one man taking on THAT many foes and walking away virtually unscathed is beyond unbelievable. The use of tactics and terrain is haphazard at best. And, you know, where does he keep all of his spare ammo?

Rogue Warfare: The Hunt is guilty of all of those transgressions as well, and many more besides. And yet “older & wiser” me, with the accumulated knowledge of my own experience with guns and such, can’t help but cringe with every on-screen mistake or gaffe. And we’ll get to those, but first…

As the second film of a trilogy (all films were shot within a several month period in the deserts of California), The Hunt picks up several weeks after the ending of Part 1. Unofficial team lead Daniel is still a captive of the Supreme Leader, while the rest of our soldiers are combing the desert (can’t help but have Spaceballs imagery here) looking for him. Tensions are fraying, the clock is ticking, and the foes are ever closer to perfecting their sarin gas explosives.

Ok, this is the part of where I get a little preachy (apologies in advance!). One of the reasons that Commando is able to get away with all of its ridiculousness is that it is very much a product of the times. Lone-wolf movies from the 80s are a dime-a-dozen. Cheese was the whole point. Those movies were never intended to skirt the line of realism. And the fans didn’t want them to.

But modern military movies? Needless to say, the times have changed since the heyday of Arnie, Bruce, and Sly. I mean, come on, Rambo filled at least three different roles in that tank (Rambo III) singlehandedly, and nobody batted an eye. But that kind of stuff doesn’t fly today. With cell phones, social media, drones, and satellites of ever-increasing sophistication, the average citizen knows much more about military operations than ever before, and the expectations have shifted accordingly. Gritty realism has supplanted over-the-top shenanigans, for better or for worse.

Unfortunately, there is quite a lot of “for worse” when it comes to Rogue Warfare: The Hunt. The entire opening attack on a terrorist camp is certainly the most egregious. Our heroes approach the camp on two dirt bikes and a 4-seater UTV, with the sniper in the UTV’s passenger seat, still armed with her marksman rifle. Her MARKSMAN rifle…in a moving, bumping, jittering vehicle. Um…no.

Also, do the heroes come at the camp from multiple angles, hoping to confuse and disorient the enemy? Nope. They follow the main road right in, all bunched together. And the bad guys just kind of let them approach. Realistically, they would have heard the team approaching from a mile away, and could have set up converging fields of fire to take the entire team out in seconds. Naturally, this does not happen, or the movie would have been over within minutes. Yes, vehicle mayhem looks good on screen, but it’s woefully mismanaged here.

The criticisms from the first film return;

For starters, nobody ever really reloads. They might switch weapons every now and again, signifying that they’re out of ammo, but we don’t see them struggling with ammo conservation.

The bad guy is still monologuing like you wouldn’t believe. I’m not joking when I say that it feels like half of the movie is devoted to his pontifications on the “evil of the West” and his desire for peace in his homeland. He’s less a villain and more a caricature. Again, I didn’t want him dead because he was a mass-murdering psychopath…I wanted him dead so he’d stop talking.

Daniel is in captivity for several months, slowly losing his mind in the heat of the desert. And yet his beard never grows in. Look…guys can ignore a lot of things in movies, but not having access to a razor for months? Yeah, we’re gonna see it and call it out every time. Come on, film crew! Not one of you shaves!?

The U.S. commander over the team has been in-country for months, maybe years, and doesn’t know how far ahead/behind Washington D.C. is in time-zones? Trust me, of anyone, HE would know.

There aren’t as many action scenes as expected, and what is here ranges from passable to underwhelming. The actors do their best, but for the most part Rogue Warfare misses the mark when it comes to actual firefights. Nothing is as loud or chaotic as it should be. Enemies run headlong into the heroes’ bullets. Stray rounds have absolutely no consequences. Headshots are commonplace. I think there might have been one, ONE, instance where an enemy combatant was double tapped after being dropped. But, for the rest, it’s the typical movie magic of “killed by a single bullet”, no matter where it hits.

I’ll stop there, as I feel the point has been made. And I won’t just sit here and spout negativity the whole time. These movies were clearly a labor of love for all parties involved. Many of the crew were pulling double or triple duty, and that kind of devotion is admirable (and one of the reasons I always want to give low-budget offerings a chance). The cinematography is still solid, and the locations are suitably dusty to stand in for the Middle East.

I really wanted this film to be more “killer” and less “filler”, but it suffers from mid-story bloat. If you’re gonna make an action movie, at least give us more action. Sadly, while the first film was tolerable, Part 2 is sub-par in every single way.