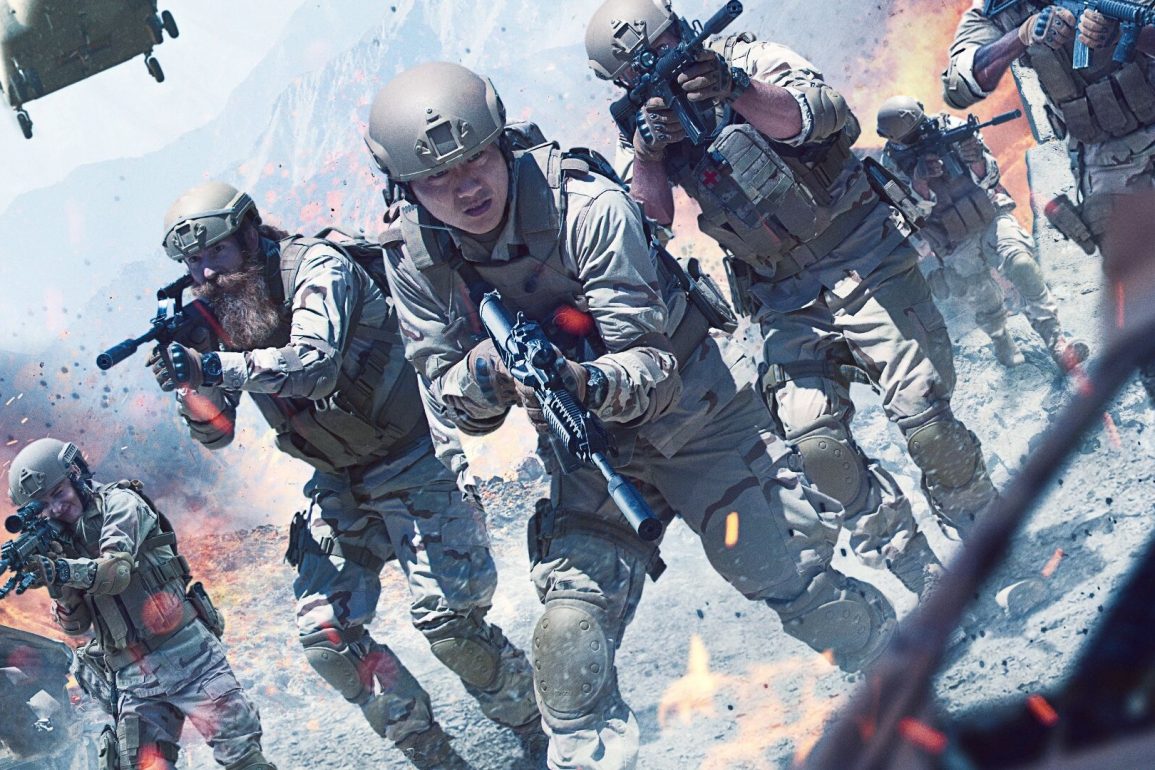 A decent direct-to-streaming actioner, for better or for worse.

Plot: A group of the best military personnel from the U.S., Russia, UK, China, and France join forces to fight an underground terrorist network.

Review: It’s hard to think of a genre more ready-made for mindless enjoyment than action, especially the mid-budget shoot-em up. Don’t care in the slightest about the sociopolitical commentary that forms the backdrop of the mission? Great…just tune out until the next scumbag gets taken down by a skillfully executed headshot. Bored to tears by the protagonist’s decision to live a pacifist lifestyle? That’s ok…scroll through your phone until he remembers that a “man of action MUST act” and starts cracking skulls. Seriously, action seems like the one genre where the viewer can be as invested as they want/don’t want to be, and the end result is still the same.

That’s not a critique, by the way. I’ve been mindlessly (or mindfully, depending on the movie) enjoying action films for over thirty years. As such, I have fully embraced the pros and cons of the genre.

Far removed from the halcyon days of theater-driven vehicles like the Die Hard and Terminator franchises, nearly all modern actioners (from the high-budget to the nigh-budget) have found both a new life, and a new home, on streaming platforms. Unless they’re helmed by Tom Cruise, of course. Rogue Warfare, the first part of a military focused trilogy, falls squarely within those DTV confines.

What is interesting about Rogue Warfare is that I went into the first movie with preconceived notions. Somehow or other, I had read an article where the director/producers discussed the making of the trilogy, and all the trials and tribulations therein, long before I ever actually watched the film. It was quite an interesting piece, and learning what I did undoubtedly elevated my enjoyment of the movie by proxy.

Which bears mentioning, because as it stands, Rogue Warfare is a decidedly middle-of-the-road offering. Trust me, you’ve been down this road before: decent performances, decent stunts, and decent stakes. You know exactly the type of movie you’re in for when the team is introduced (to us, and to each other) within the first few minutes, and then promptly sent into action with very little preamble. Character backgrounds to help with viewer investment? Forget it. Camaraderie forged through years of serving together? Nope. A central character for the audience to latch onto? Keep dreaming. Like the internet sensation said: ain’t nobody got time for that. For this first movie, at least, the pedal is most certainly to the metal, which both helps and hinders the final product.

On the one hand, it’s a nice change of pace for a movie to just “jump right in”, forgoing all the tropes and conceits in order to get to the body count quicker. On the other hand, it’s almost…ALMOST…disrespectful to the genre with how it just sidesteps all that we expect from a military actioner.

Oh, and don’t let the “starring Stephen Lang” tag fool you; he’s barely in it, and in a non-action role at that.

But enough of all the high-brow ruminations and genre considerations; what about the swearin’, salutin’, ‘splosions, and shootin’? Well, since that’s the main focus of the movie, there’s plenty of each to go around. At times reminiscent of a collage of video-game cutscenes as opposed to a proper film, Rogue Warfare wastes little time in jumping into the action. It’s a lean & mean fighting machine, bereft of romantic subplots, training montages, or any of the other extraneous fluff that most DTV actioners bring to the table. As mentioned earlier, our team hasn’t even had a chance to meet each other when we first encounter them. Right from the jump, they are given a mission, with learning each other’s names barely a consideration. From there it’s full speed ahead.

Filmed in two different locations in Southern California, the desert fighting on par for this type of mid-budget flick. Long-range sniping, silenced door-to-door searches, CQC…it all looks good against a passable Middle-Eastern backdrop. The various actors and stuntmen do a decent job of running, gunning, spying, and dying, and the military hardware (for the most part) fits the bill. Picture action sequences a couple of rungs below what was offered in Strike Back and you’ll be in the ballpark.

Speaking of the actors, we aren’t given much time with any of them individually, so they are painted more in broad strokes than given actual character arcs or growth. Each performer fills their role well. None really stand out, but neither do they drop the ball. Who knows, maybe they’ll get more screen time in the next two installments.

But not everything flows as well. For every tactic and detail Rogue Warfare gets right, it gets an equal amount wrong. For example, the French soldier on the team carries a Steyr AUG. Quite a recognizable weapon, most prominently featured in the first Die Hard, and it’s not outside the realm of possibility that a few of these firearms would still be carried today. What IS outside the realm of possibility, however, is that AUG magazines are hot-swappable with American AR-15 mags. They. Are. Not.

Another gaffe is that the team is deployed without an assigned team leader. Whether it be a full military squad, a specialized mixed-service outfit, or even a private contractor crew, there is ALWAYS a dedicated team captain. This is both to assist with decision making as well as to avoid confusion in the middle of a firefight.

Other smaller nitpicks abound; one team member carries a short-barrel SMG, and racks up a ridiculous body count at medium engagement range when compared to his AR-15 carrying companions. Short-barrel SMG’s are NOT that accurate. In another scene, when several of their squad go loud, the rest of the team members look away from their principal target, who then gets the drop on them with disastrous results. For professional soldiers, something like that would not happen.

Oh, and the terrorist leader monologues a lot. And I mean A LOT. I honestly didn’t want him dead because he was a murderous thug…I wanted him dead so he would STFU!

That said, Rogue Warfare is certainly not the first movie to struggle with these details, and will not be the last. Again, it’s not necessarily a bad thing. Not every movie can be a big-budget affair with scores of military advisors on staff for accuracy, and not every movie SHOULD be. Again, sometimes you just want to turn off your brain and watch things go boom. In that regard, Rogue Warfare succeeds.

On the technical front, there are no issues. The cinematography is serviceable, the sound design is acceptable (although the silenced weapons fall into the generic movie trope of being TOO quiet), and scene edits/transitions are smooth. CGI use is minimal, but what’s there is a little underwhelming. Par for the course, I suppose. As far as the soundtrack goes, the opening score is actually quite good.

Being the first film of a trilogy, Rogue Warfare really doesn’t end like a traditional movie. It basically just hits a cliffhanger and then rolls credits.

As mentioned earlier, knowing some of the production details helped me enjoy the movie more than I probably would have. All three movies were filmed back-to-back in just 45 days. Quite a lot of the extras pulled double-duty, and there were the usual unforeseen hiccups and such that befall all movies. That they managed to crank out three movies worth of footage in such a short amount of time, and with a minimal budget to boot, is quite impressive. The first movie may not hit all the highs that I was hoping for, but it’s still a commendable effort. And from what I can gather, the next two improve upon the formula. So, I’ll definitely be checking them out.