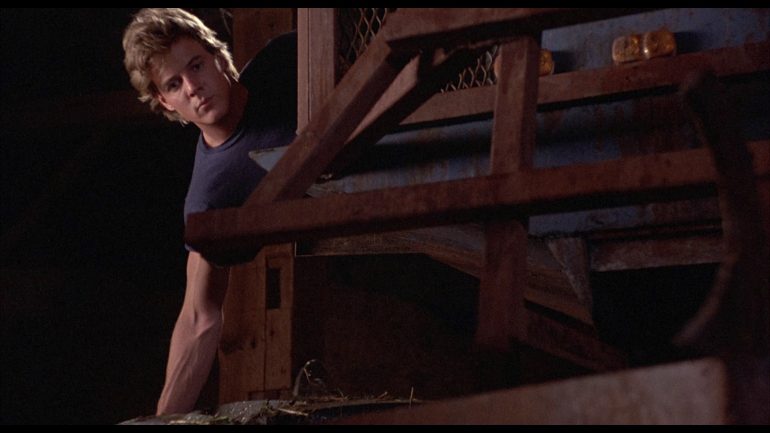 If you’re a fan of Canadian exploitation, then look no further because you’ve met your match with Rolling Vengeance.

Synopsis: A truck driver builds a special, eight-ton truck to help get revenge against the rednecks who killed his family and raped his girlfriend.

Review: Joey Russo (Don Michel Paul) and his father run a humble truck driving business, and everything is going well for them. Joey’s two kid sisters and mother dote on him and look up to him, but a dreaded fateful day arrives when his mom and two sisters are killed in a terrible auto accident that was the direct result of drunk driving and harassment on the part of a group of good for nothing brothers – all sons of a local strip joint owner named Doyle (Ned Beatty). Joey and his father don’t even have time to grieve when all of the hooligans responsible for the deaths of his family are given a slap on the wrist by the courts for lack of sufficient evidence. And if that wasn’t bad enough, the same hooligans sabotage Joey’s father’s truck, sending the old man to the hospital, and then they rape Joey’s girlfriend (played by Lisa Howard)! Joey, who only has murder in his heart for his tormentors, builds a massive fortified monster truck with a giant drill attached to the grill and begins a systematic “rolling vengeance” on Doyle’s boys!

Clearly inspired by Cannon’s Death Wish sequels, Rolling Vengeance is a drizzly revenge actioner with some fun scenes of the giant truck mowing down scum in broad daylight. Lots of vehicular destruction and bad guys screaming for their lives fills the last quarter of the film, and if you’re a fan of Canadian exploitation, then look no further because you’ve met your match with Rolling Vengeance. From director Steven H. Stern, who made the fun Vietnam vet action film The Park is Mine.

Newly available on Blu-ray and DVD from Kino Lorber, Rolling Vengeance is a delight in HD. With a newly recorded audio commentary, original theatrical trailer, and an on-camera interview on the special features, this is a fun film to add to your collection.