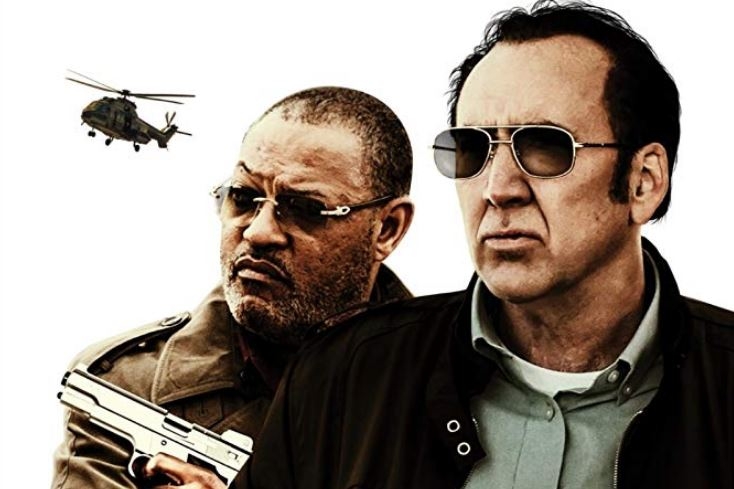 RUNNING WITH THE DEVIL has an interesting approach to well-worn concepts but is undone by too many threadbare characters and unnecessary plot points.

Plot: When a cocaine shipment is compromised, two henchman search to see where the supply chain is breaking down.

Review: There is an old saying that, “the devil is in the details”. One interpretation of that idiom is that a seemingly basic task will prove to be difficult when you examine the details involved with making it happen. Nothing is ever as simple as it seems, after all.

The film, aptly titled RUNNING WITH THE DEVIL examines this idea through the prism of the drug trade. Illegal drugs have long been a fascination of cinema but rarely has the actual process of bringing drugs from harvest to user been examined with the kind of depth on display here. Writer/director Jason Cabell, a former Navy Seal with DEA experience, has crafted a story where the main character is not any of the many character actors in the film but is in actuality the drug itself. We follow a shipment of cocaine as it is harvested, prepared and shipped from the fields of Columbia all the way to the urban sprawl of Vancouver Canada. Each step of the way, new obstacles are circumvented, and the price of the cargo rises exponentially (denoted by an on-screen tally that appears at each new increase).

To give the audience a look into this process, Cabell establishes a story where a drug kingpin, Barry Pepper (CRAWL), has tasked one of his regional heads, Nicolas Cage (LEAVING LAS VEGAS), with determining why the last few drug shipments from Columbia have been suspiciously light. Cage along with an enforcer, Cole Hauser (2 FAST 2 FURIOUS), travel to the southern country to follow the drugs from the actual farmer, Clifton Collins Jr. (PACIFIC RIM) all the way back to Canada to look for where the shipment is being depleted from.

All of this is occurring while a federal agent, Leslie Bibb (IRON MAN 1 & 2), works to bring them all down by leaning heavily on two small-time members of the organization, Laurence Fishburne (THE MATRIX trilogy) and Adam Goldberg (THE PROPHECY and SAVING PRIVATE RYAN), who are looking to avoid jail time after running afoul of the law.

The characters of RUNNING WITH THE DEVIL are very thinly sketched and there is minimal exposition. The film goes so far as to not give anyone a name other than a brief descriptor that appears on the screen when they are introduced (i.e. “The Snitch”, “The Farmer”, and so on).

While there are subplots of betrayal and vengeance to give the story personal stakes. The film is mostly concerned with the mechanics of how the drugs are moved internationally. Everything from backpackers, to snowmobiles, and even skydivers are used to get the illicit substances from one country to the next and it’s very engaging watching how it happens once you realize what the film is doing. It aims for realism and it’s impressive in its scope. The filmmakers did lengthy location shooting in Columbia, the U.S., and Canada to aid in that goal. This extra effort, along with the film’s impressive cast, makes RUNNING WITH THE DEVIL feel much bigger than its “limited theatrical release”/DTV brethren.

Speaking of the cast, surprisingly this where the film starts to show some of its faults. There are so many characters that the limited dialogue causes the early parts of the film to be confusing and hard to follow before you understand what Cabell is going for with the story. Also, very few of the actors make any real impression as they are, through large parts of the narrative, just a reason for us to be able to witness this unusual journey. Nicolas Cage, who is known for creating memorable performances even in his worst films, is completely dialed down here and, outside of one brief moment in the third act, utterly forgettable. Which is not something you can typically say about his work. He is not bad in the role. There is just so very little to it, despite Cage being present throughout the majority of the film.

RUNNING WITH THE DEVIL would have been greatly improved by removing a few characters from its under two-hour runtime. Every bit of concerning the federal agents, while well crafted, could have been sliced out – focusing the narrative. The law enforcement aspects seem to be in the film just to give a sense of morality to the story and a “happy” ending that feels at odds with the rest of the film’s morally ambiguous outlook.

This sort of trimming would have given the opportunity for some of the other great aspects of the film to be even more pronounced, like the performance of Laurence Fishburne. Fishburne seems to have found all the manic energy that Cage is missing this go-round. He is a sweaty, drug-addled mess in the film and it’s a lot of fun to see him really sink his teeth into all the scummy places this role lets him explore.

Another aspect that could have used more development was Clifton Collins Jr.’s role as the man growing the initial crop that propels the narrative. He radiates genuine decency as a simple man doing what he must to provide for his family in a place without any other options. He is excellent in the role and it feels like a real disservice that his part of the story is so truncated.

RUNNING WITH THE DEVIL wants the audience to think about the details of drug trafficking in ways they likely haven’t before. While at the same time working as a more standard, albeit stripped down, crime thriller. It’s disappointing that only one of these two concepts work as intended in the film, leaving it to be an interesting yet ultimately frustrating curiosity.