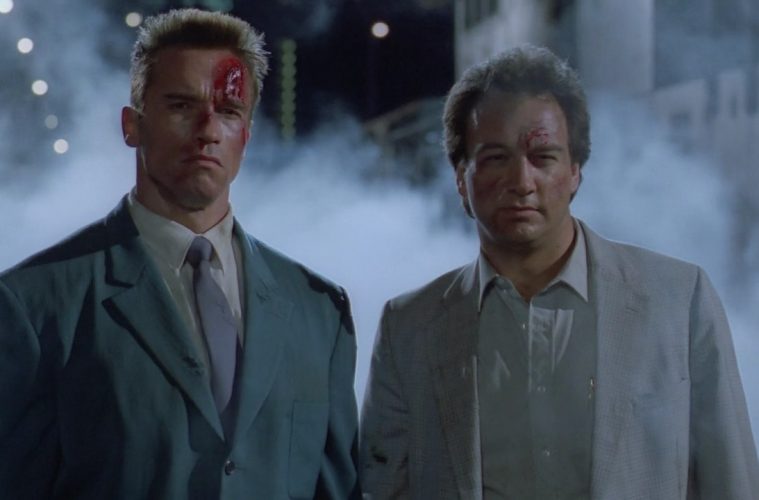 So, I guess, it’s common knowledge now that Russians make for excellent movie villains – these guys (or should I say, ‘we’?) are resourceful, have a cunning plan and are, in general, perceived as worthy and truly menacing opponents to the heroes. Hence, a lot of action movies have had a knack for Russian antagonists. Some time ago, there were the Reds, these dirty communists, who were the stock villains the same whey Nazis often are. The ideology doesn’t really matter, since none of the villains make it past the end credits and are destroyed mercilessly with a Reagan-esque flavor. ‘Rambo First Blood Part II’, ‘Rambo III’, ‘Red Dawn’, ‘Red Scorpion’, ‘Rocky IV’, ‘Invasion U.S.A’, ‘Octopussy’, ‘Golden Eye’, ‘The Losers’, ‘Firefox’. After the Soviet Union fell, this trope lost some of its former steam, albeit Russian villains still show up from time to time – mostly either as ex-KGB or former military mobsters and mercenaries or as former regime personnel turned neo-communists, who are still fighting their war against the U.S. It’s a fascinating trope, so fascinating that there are cultural studies on the subject of Russians being the stock villains. Yet there is one little known fact, that few across the pond know, that changes the whole picture. So, you are ready to find out what the hell am I talking about?

These action movies were so goddamn popular in the Soviet Union, they ruined communism and had a whole generation of Russians fall in love with the American pop culture.

Yes, it was illegal. Yes, they were smuggled into the country in secrecy and distributed entirely unofficially. In order to provide to you the whole picture, I talked to a few people, who were involved with this operation in the past. So, by large, there were two categories of American movies in Russia. The first ones were the ones that were legally purchased by the State Committee for Cinematography and shown in Soviet cinemas. ‘The Great Race’, ‘Mackenna’s Gold’, ‘The Magnificent Seven’, ‘Three Days of the Condor’, ‘’All the President’s Men’, ‘The New Centurions’, ‘Midnight Express’, ‘Angel Heart’, ‘One Flew Over the Cuckoo’s Nest’. These were either the movies that were considered politically harmless or, as is the case with, for example, ‘Three Days of the Condor’, depicted Americans in a bad light. All of these movies were mercilessly edited, all of the erotic and way too violent scenes getting cut out. Funnily enough, Blaxploitation might have been a good addition to this list, yet, alas, I am way more creative than Goskino was. Such a shame.

Soviet movies, on the other hand, were either on the subject of WW2 or a product of socialist realism. And while some of the military movies were genuinely good, such as ‘Father of a Soldier’, the people grew tired of mulling over the same subject for forty years. As for the socialist realism, most movies about peasants doing their best for the greater good of the kolkhoz…Well, these films never caught on, being as propagandistic and dull as they get. Discounting fun movies, for example, ‘White Sun of the Desert’, which is an awesome Soviet Spaghetti Western, the entertainment industry was incredibly weak. And the people, they craved for something new. Something different. For these people, America was not the hated enemy, but an almost mythical land of Arnold Schwarzenegger, bubble gum, cool cars, insanely hot women and pizza. Having something ‘American’, if only something as trivial as jeans could have made you the coolest guy on the block overnight. As you might have guessed, the second category of the American movies in Russia were the ones smuggled into the country.

It all changed when VHS got invented and, in conjunction, American action movie fever began in earnest. In the Soviet Union there were three groups of privileged citizens – party officials, diplomats and sportsmen. The latter two smuggled in loads and loads of videos, some from America itself, others from Bulgaria or Hungary, where the state sec control was weaker. Even though home video systems were few, some of the people did distribute the movies and got well paid for supplying others with the beloved, yet forbidden fruit that were the American movies. Illegal VHS tapes began to appear in Moscow in the beginning of the 80s, after the Olympic Games. ‘The Shining’, ‘Scarface’, ‘Jaws’, ‘Blues Brothers’ and ‘The Godfather’ were among the first ones. The latter got incredibly popular amongst the emerging Russian Mafia, our wiseguys trying their best to emulate Corleone’s mannerisms. These movies were translated by a bunch of professional interpreters. Some of these voice-over translators went over to attain a legendary status – Volodarskiy, Gorchakov, Gavrilov, Mikhalyov. The latter was even Brezhnev’s personal translator for a short time, yet due to his disenfranchisement with the Soviet regime, ended up translating pirate videos. It is only now that we know their names; in the 80s, they were anonymous, hiding from the secret police. Yet their voices were a brand of the movie being illegal, giving the American action movies a romantic outlaw flavor. For example, Volodarskiy had an incredibly nasal voice. According to the legend, the man wore a clothespin on his nose whilst voicing the movies, so that the KGB wouldn’t be able to identify him by his voice.

In the latter half of the 80s, with Gorbachev in power, the Soviet system went comatose and was on the verge of death, like a mortally wounded beast. There were lots of political and economic reasons as to why it happened, which I’ll not discuss here. Yet believe it or not, Hollywood and rock music are the reasons for the fall of the Soviet regime as well. They did set up aesthetic and ethical standards, which were way too charming to resist. Good ole Ronald Reagan, as an actor, should have known about the power of cinema better than anyone. Must have been his cunning plan.

As for the action heroes, youngsters from Moscow loved Stallone, Van Damme, Hauer, Arnie, Seagal and others just the same way their peers in Los Angeles or New York did. Well, perhaps Arnie had a bit of an edge, due to his Austrian heritage, funny accent and… you know. For being the way he is. By the way, ‘Red Heat’ is immensely loved by the Russians and not only because of the ridiculous introduction. Not even because of the C O C A I N U M. This movie has shown we can be friends and that, after all, we are not that different. It says something that ‘Red Heat’ has a rating of 6,1 on the IMDb, while it has 6,7  on Kinopoisk (basically, our own IMDb rip-off). Thinking of ‘Red Heat’ makes me think we have to make a movie about a Soviet guy in 80s LA, trying to buy VHS tapes to bring them back home, only to mess up some investigation and get himself into a buddy-cop situation with an American policeman.

Only difference was that in Russia they appeared almost at the same time. In due time, ‘video saloons’ appeared, which were small-time business establishments. Mostly, a ‘video saloon’ was an inconspicuous room that could have housed only 10 or 12 people with video house systems. Some of these were located near the subway stations. As for the police, these guys almost never got involved. Giving your local cops a few tapes of ‘Emmanuelle’ franchise, so that they could have some fun with their wives after a hard day’s night was just enough. So, after work hours, people went to these ‘video saloons’ and watched American movies. At the end of the 80s, they even became legal and the Russian TV stepped in as well. My father still remembers the day ‘Blade Runner’ was officially broadcast.

You thought the Russians cheering for Rocky against Drago was unrealistic? Yet the real Russians went even further, rooting for Rambo against the Soviet soldiers. Such was the power of Sly, of what he stood for and so strong was the hatred for men in military uniform, who represented the regime. This was a full-blown pop culture-induced rebellion. Lots of Russians, as Mandelshtam said long before the action movies, were ‘yearning for world culture’. Only this time, the Russians yearned for the pop culture.  ‘Video saloons’ and the whole Wild West VHS era in Russia only ended in mid-90s, when DVDs replaced the tapes, albeit they are still fondly remembered as the time of the great political upheaval and remain a sign of resistance to communism.

In the end, the country, which gave birth to the most villainous antagonists in American action movies, was set free by the sheer awesomeness of Rambo, Terminator, Rocky and Mad Max. As a Russian, who is in love with the American movies of 80s and 90s, I can’t thank them enough for this gift. In the end, to us, these action heroes ended up being heroes FOR REAL.

Below is a photo of a few Soviet soldiers on a day off leaving a ‘video saloon’ which I mentioned (semi-legal cinemas for American movies). 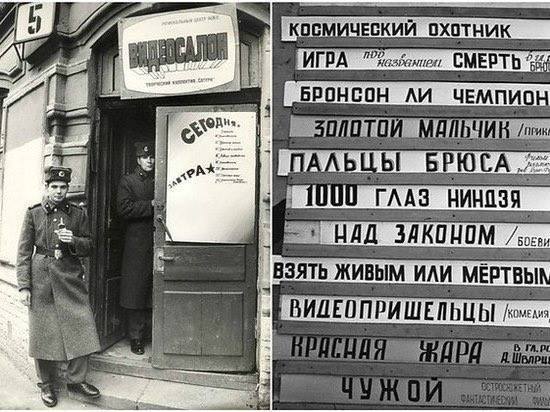