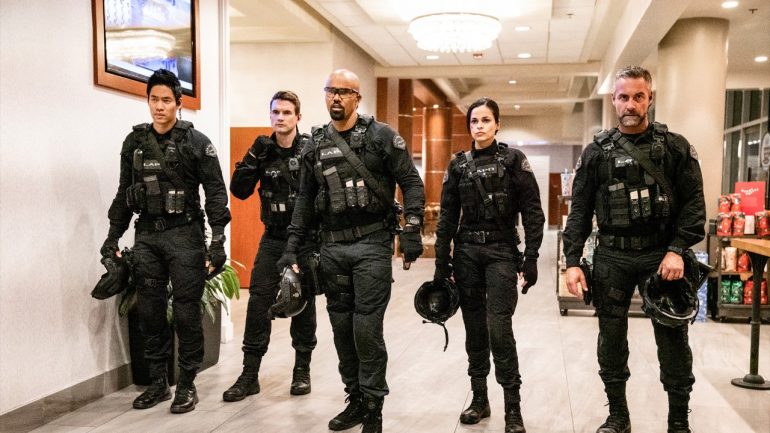 Plot: Torn between loyalty to where he was raised and allegiance to his brothers in blue, former Marine Daniel ”Hondo” Harrelson (Shemar Moore) has everything it takes to be an excellent leader and bridge the divide between his two worlds. Hondo’s elite unit includes David “Deacon” Kay (Jay Harrington), an experienced S.W.A.T. officer who always puts the team first, despite feeling overlooked for the lead job; new overseeing street-savvy Lt. Det. Lynch (Amy Farrington); former canine officer Christina “Chris” Alonso (Lina Esco) and the cocky yet troubled Jim Street (Alex Russell).

Review: Season 3 deals with the following subplots: Hondo dealing with his adopted son, his estranged dad’s cancer relapsing health and his new girlfriend Nichelle; Street dating his boss’ daughter while helping his foster brother by going undercover and infiltrating a deadly Neo-Nazi crime ring; a trip to Tokyo; Chris being caught up in a love triangle; and much more twisted mayhem! Much like the other CBS counterpart show SEAL Team, I definitely felt like Season 2 was acceptable but ultimately filler material and that this third season opened up the show to far more entertaining possibilities. This show especially benefitted from having multiple recurring or two-parter type episodes (sometimes even more along the lines of three-parters!) and that made it easier to look forward to the next week. This sounds soapy when I describe this to you but trust me when I tell you that it’s loads of the tactical action and crime drama tropes that never hurt any TV genre fanboy. It’s still interesting how Shawn Ryan went from working on over-the-top fun shows like Nash Bridges to groundbreaking grit like The Shield and now back to a fun yet rather moody excuse for escapism but I guess that’s just shows you his range. And I’m not going to complain given how it’s at least trying to be more than just focus on different crime cases each week and show some motivation for the characters to avoid feeling over-melodramatic.

Season 4 details a few different areas of intrigue like having Hondo and his father look back at the history of the imperfect LAPD and some international crime lords from last season resurfacing. Other intriguing yet arguably not-as-interesting subplots emerge here yet the show still has the nifty ambushes being well displayed and angle detailing Hondo’s loyalty to both his pals in the ‘hood where he grew up and to his squadmates. This wasn’t my personal favorite season due to being occupied with other similar crime fighting shows but it was still a damn good year thanks to the never ending mayhem and restless dedication of how this show is shot and detailed.