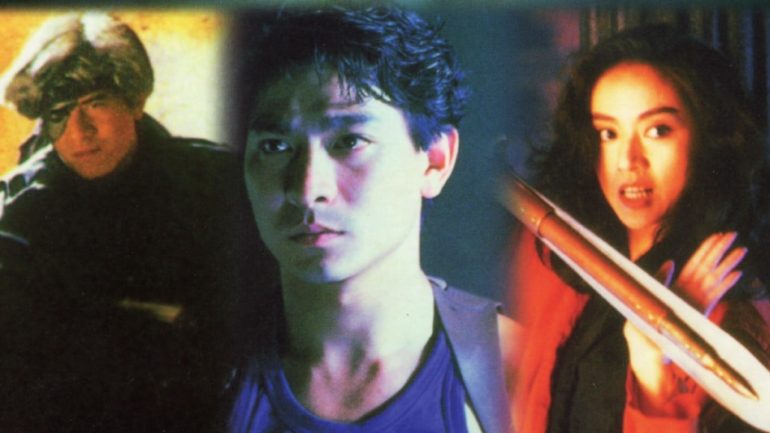 Saviour of the Soul has some awesome elements like Silver Fox, creative weapons, Andy Lau’s wicked sword-yo-yo-combination weapon, inventive choreography, great set design and cinematography. It does however, meander horribly at times and is terribly uneven with spots where the movie just grinds to a halt; there’s also some eye-rolling humor that doesn’t fit.

Plot: Master swordsman Silver Fox (Aaron Kwok) avenges his master by tracking down and attempting to slay knife-flinging Wai Heung (Gloria Yip) who is part of an elite force of plain-clothed super-cops called City Soldiers (depending on what translation you get). After Silver Fox kills one City Soldier, Wai goes into self-imposed exile leaving poor love-stricken fellow City Soldier Ching (Andy Lau) to track her down and confess his true love to her.

Review: I have trouble believing that this movie isn’t based on anything considering its wackadoo City Soldier concept that it seems to discard fifteen minutes into the movie, Andy Lau’s super-cool yo-yo weapon which retracts into a handle that forms a hilt that a long, wobbly sword blade comes out of, and for Silver Fox’s amazingly creative abilities and design in the movie. Let’s start with Silver Fox. The opening scene features Silver Fox flying around wire-work style slicing and dicing prison guards to free his master. They show him slicing the tops of heads off and chopping people in half on screen! Later, he smashes through a mirror and stabs a couple people and still later he shows he has the ability to poison people by walking through them via a magic potion that temporarily weakens him. His abilities in the film are cool and creative and when he gets stabbed in the eye in one scene, he comes back with a cool, stylistic eye-patch thing that makes his overall look all the more bad ass. Seriously though, Every time Silver Fox is on the screen, the movie is elevated action-wise.

Saviour of the Soul is shot amazingly with some breathtaking visuals. Some dream sequences look like paintings, night scenes exaggerate the moon and stars, and the futuristic yet sterile looking buildings evoke a Blade Runner feel.

The other characters aren’t as cool as Silver Fox. Lau’s character is annoying with him pining for Wai the whole movie, but the child he takes in and trains is even more jarring to the tone of the film as she pines for Lau’s character and cries almost non-stop. The dorky humor runs completely counter to the wanton violence that Silver Fox dishes out. There’s one point where the two intersect where Lau waves his wobbly sword at Silver Fox, and fox shakes his head around following the sword and continues to do so after Lau has stopped, forcing Lau to remind him that he’s not waving his sword anymore. After seeing Silver Fox stab, chop and slice people, this moment just doesn’t fit. As well, the last 15 minutes or so seem to take the steam right out of the forward momentum of the film. For most of the movie, you’ll probably find yourself waiting for Silver Fox to show up again. And I’m not even going to talk about hammy, over-the-top Anita Mui. She’s funny at first, but her shtick gets real old, real fast.

Aside from the eye-rolling humor, Savior of the Soul propels itself into super-cool territory with all the scenes involving Aaron Kwok’s Silver Fox. Even though you can see some of the wires suspending him in the air sometimes, he’s so awesome it doesn’t matter. Seriously, watch this movie for the Silver Fox character.