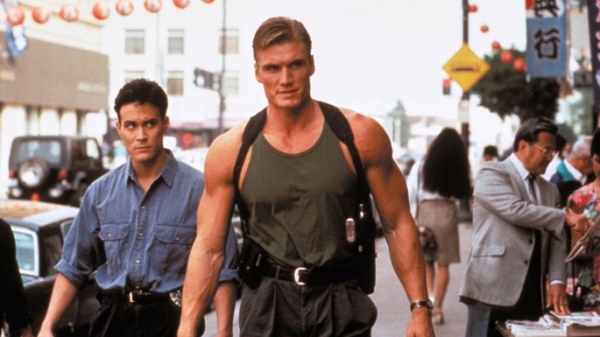 At only 76 minutes long, Showdown in Little Tokyo manages to pack everything inside to make it a really entertaining buddy/buddy movie. There’s plenty of action, fighting, comedy, sex, nudity, and explosions to fill at least two movies.

Plot: Detective Chris Kenner was orphaned as a child as his father was in the service and was killed and lived in Japan. Now he is on the trail of ruthless Yakuza leader named Yoshido, who helped establish a small Japanese area in Los Angeles and is now running a drug ring disguised as a brewery. However, Kenner must team up with a Japanese-American detective named Johnny Murata, and he also must protect a witness named Minako who would testify against Yoshido. But what Kenner will soon discover that he will be in a lot more than what he bargained for.

“That’s perfect! I’m partnered with a homicidal maniac on a personal vendetta of family vengeance!”

Warner Archives Blu-ray Review: Sgt. Chris Kenner (Dolph Lundgren), a specialist in Japanese culture, is on a case in Little Tokyo, Los Angeles when he realizes that he might be in over his head. He upsets the yakuza, which is running a drug empire in L.A., and worse still is that the head of the yakuza is Yoshida (Cary-Hiroyuki Tagawa), the man who killed his parents in Japan when he was a boy.

Kenner is assigned a new partner – the cocky Johnny Murata (Brandon Lee) – who doesn’t know a thing about Japanese culture, despite the fact that he’s half Japanese. Together, they troll the underbelly of L.A., looking for clues to a young woman’s brutal murder, while getting in the yakuza’s business, which obviously puts them in harm’s way. As Murata wisely exclaims in one scene, “This must sound strange for being a cop, but let’s get the fuck out of here!”

At only 76 minutes long, Showdown in Little Tokyo manages to pack everything inside to make it a really entertaining buddy/buddy movie. There’s plenty of action, fighting, comedy, sex, nudity, and explosions to fill at least two movies. Mark L. Lester (Commando) directed with a tongue-in-cheek attitude, and Lundgren and Lee make a great team.

Tagawa is a despicable villain, and the film caused some controversy when it was released because of the negative way it depicts Asians. Two years later, Rising Sun with Wesley Snipes and Sean Connery took some flack for the same reason. Many well-known stunt actors like James Lew, Al Leong, Simon Rhee, Gerald Okamura, Eric Lee, Philip Tan, and Toshishiro Obata have small roles in the film. After this film Brandon Lee made Rapid Fire.

For years, this film has only been available in the U.S. in a 1:33:1 aspect ratio on a bargain bin release from Warner Brothers, and true fans had to buy a Region 2 DVD release from the UK to get their hands on a widescreen 1:85:1 transfer. Warner Archives has just unleashed an “Archive Collection” Blu-ray (out July 21st), which offers an appropriately film-textured looking 16×9 widescreen transfer with a modified 1:78:1 aspect ratio.

I honestly can’t tell the difference between 1:85:1 and 1:78:1, as they both look identical to me on my widescreen television. The sound quality is stupendous on this release, and anyone fed up with watching their crummy full-screen DVD of this film absolutely must make purchasing this release a priority. The disc comes with English subtitles and a theatrical trailer.