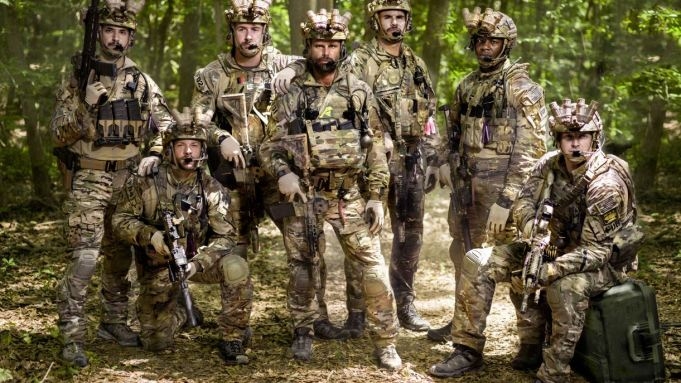 Plot: The series chronicles the operations and daily lives of operators who are part of the U.S. Naval Special Warfare Development Group (DEVGRU), more commonly known as SEAL Team Six. The U.S. Armed Forces’ primary counter-terrorism unit team’s personal romances and their 2014 mission are detailed including one to eliminate a Taliban leader in Afghanistan going awry when they uncover a U.S. citizen working with the terrorists.

Review: Where do we even begin with this jar filled to the brim with wrong sauce? The show first made headlines when the History Channel chose to air it simultaneously at the same time as its sister channels A&E and Lifetime (which they’ve done before), announcing that lead star Joe Manganiello had dropped out of the lead role (which later went to Mr. Goggins) due to an injury and the History Channel claiming it was based on random accounts but that they had to fictionalize it to keep it confidential. Adding to the list of problems was that it was pitted against strikingly similar shows like CBS’ SEAL Team, NBC’s The Brave and The CW’s Valor.

I kept all my expectations low as I had seen History’s previous infamous mini-series like Texas Rising and Sons of Liberty, which despite their big cast and crews, fell victim to bad green screens, poor research, hammy overacting, dull transitions and being labeled as propaganda due to making biased and blatant statements. However, SIX feels less like a recruitment ad and more like lame cliches from a billion other war films/shows. I honestly have no idea what happened here given that the crew and technical advisors have worked on other war entries like Band of Brothers, Live from Baghdad, The Pacific, Zero Dark Thirty and Lone Survivor. It was even co-created by one of the Apollo 13 writers!

I can say for certain that any Action fan here is definitely going to love Military/War movies of various kinds. Many swear by the likes of Black Hawk Down, Full Metal Jacket, Crimson Tide, Top Gun, The Thin Red Line, Saving Private Ryan, Apocalypse Now, and even The Wild Geese, Act of Valor and Rambo series. We can all enjoy them, wether they’re slightly melodramatic, cheesy, overly patriotic or even plain stupid; either way we love them.

We’ve already encountered excellent special forces films and shows in particular prior. Tears of the Sun, G.I. Jane and even 1990’s Navy SEALs fit the cinematic bill rather decently. We had already seen shows like The Unit, E-Ring and Strike Back. Was this going to bring something new to the table or simply serve as decent entertainment? The answer was “No” to both respectively. The main issue was the camerawork. Many frown on shaky cam of any sort or tracking shots but there is plenty of good exceptions to that rule where it’s not meant to be overdone and is supposed to give a docudrama look/feel, amp up the urgency and sometimes even cause deliberate state-of-the-moment urgency. Here, it completely felt like none of the filmmakers storyboarded and shot everything on the fly. I don’t feel like anyone phoned it in here but I definitely was underwhelmed by lacking establishing shots and rapid-fire (no pun intended; not even at all!) back-and-forth hill battles.

Also not helping was the clueless awareness of the on-going “I’ll get back home soon, honey” rapport for the characters’ personal lives. This isn’t uncommon for the genre or even real life, but it doesn’t have to be so irritating either. I saw it happen once, I don’t need to see it a dozen more times. The overall missions lack any notable moments or visual shots that would make the battles stand out, and since Rip is the only real one with personal stakes, everyone else feels like mindless grunts that the performers struggle to bring to life because there’s honestly no backstory. I get that many SEALs can be secretive about their lives and not much for deep talk but this show is clearly trying (and failing) to develop them in any way that would be clearcut or serve as actual minor exposition. None of the performances were bad, mind you, just not the finest hour for any of the actors.

The African mission segments ratchets up some interest at first thanks to the scenery and Rip trying to make sense of his complex life but then it quickly becomes dull once there’s a predictable going back to rescue a few people he personally knows, only to be captured and held hostage of course. The first season neither ends with a bang nor shockingly, only exiting stage right with the same monotone nature it started off with. Season 2 changes the cast up but despite heavily involving Olivia Munn’s operative and her being dialed into this action role, her scenes are too far and in-between to truly attach even the most forgiving viewer to her cause. I will give some pros for Season 2 faring overall better than Season 1 by giving all the characters different things to do and featuring more aerial missions this go-around. Unfortunately, there are still too many cons like the fact that we still don’t have any interest or attachment to the supporting characters from last season so they once again don’t make one tempted to follow them along.

The show also seems afraid to take any real risks, just sort of play it “by-the-book.” Giving the amount of neat special forces and war books out there, both fiction and non-fiction, I feel like History Channel even lied about the so-called claim that they interviewed operatives as there’s plenty of dangerous real-life stuff you can read in the newspaper and reliable internet sites. There was some sex and language but it was barely worth the TV-MA or censored TV-14 rating (depending on the channel) as they were brief and only reminded me what far more graphic content I’ve seen on the premium channels. The battles were also in the dark but it’s hardly an artistic decision and more likely the effect of uninspired lighting and lousy color correcting especially because you barely see anything.

Given how groundbreakingly thrilling both The Unit and Strike Back were, and that SEAL Team is currently taking some risks eve for a network show, it’s best to skip this lackluster outing. Even if you’re a special forces completist, I doubt anyone will think about this show afterwards.