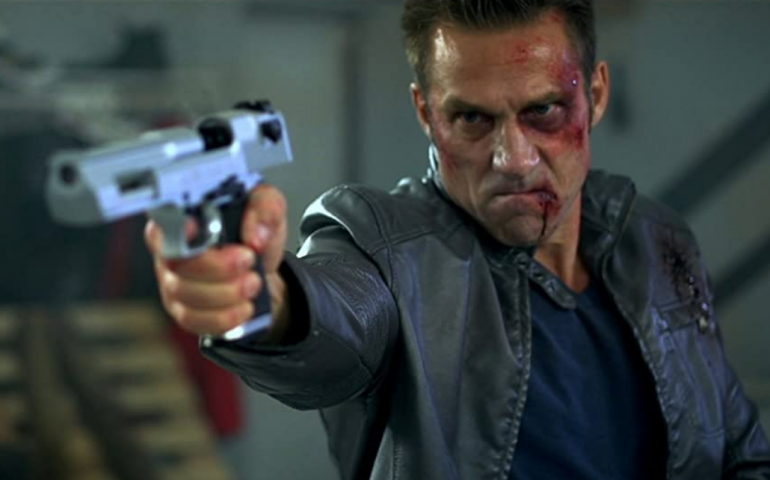 Skin Traffik is an entertaining effort from Gary Daniels; it never matches the highs of his PM Entertainment days but there is enough action to be worth a rental at least.

Plot: Hitman for hire Bradley decides to turn his back on killing for a living and drops out of society, But, when he encounters a savage pimp and a desperate woman in the London suburbs under his control, Bradley embarks on a quest to save the young girl from the clutches of the brutal gangsters that trade in women as currency and quickly gets entangled in a vile underworld of vice and corruption in which daily survival is not so much a skill, but an instinct.

Review: I’ve always liked Gary Daniels and there are quite a few of his films that I enjoy, particularly the ones with PM Entertainment which are my personal favorites. He’s one of those action stars that should’ve been bigger and given a chance, but that was unfortunately not the case.

To me, this was one of his better efforts in recent years and is a relatively decent time waster that knows exactly what it is and doesn’t hold back.

Gary shines here in the role so he elevates the material he’s given; Eric Roberts as usual makes for a fun villain, and Jeff Fahey is always a welcome addition whenever he’s on the screen.

The action for the most part is incredibly well done, with some solid fight scenes that showcase Daniels’ abilities very well. It’s competently directed by Ara Paiaya, especially the action scenes and the parts in between are serviceable.

The story is nothing special and we’ve seen this type of film before countless of times, but for what it is, it’s still entertaining.

There are 3 big issues I had with Skin Traffik which I have to point out; one is the sound mixing which at times is very awkward especially during certain scenes with Daryl Hannah. The score gets incredibly overbearing especially during some of the action which takes you out of it at times which can be frustrating.

The last issue was them having a sequel-bait ending which is a pet peeve of mine especially since it’s rather pointless and unneeded.

Overall, Skin Traffik is an enjoyable flick from Gary Daniels that has some solid action, a good cast, and moves at a fairly brisk pace.