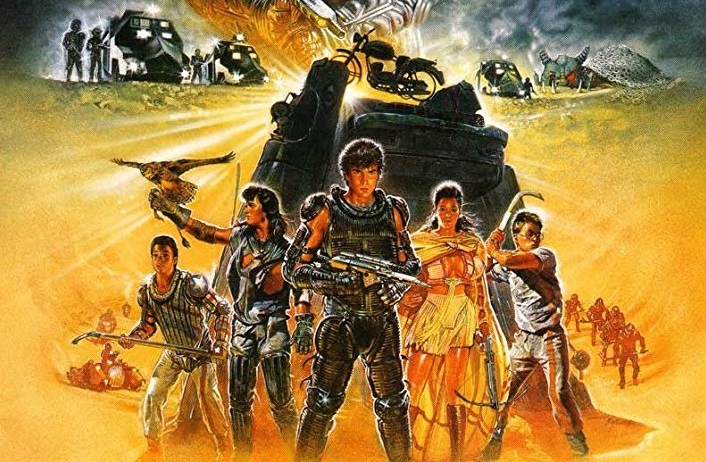 This is a movie that looks great in a clear, filmic grain, and Kino has met every requirement in bringing this to the next gen of hardcopy media. While there are no special features, the movie has never looked or sounded better.

Synopsis: In a future in which most water has disappeared from the Earth, we find a group of children, mostly teenagers, who are living at an orphanage, run by the despotic rulers of the new Earth. The group in question plays a hockey based game on roller skates and is quite good. It has given them a unity that transcends the attempts to bring them to heel by the government. Finding an orb of special power, they find it has unusual effects on them. They escape from the orphanage (on skates) and try to cross the wasteland looking for a place they can live free as the stormtroopers search for them and the orb.

Review: 41 years after the “ecowars,” the planet is a desert, with the remaining water supply cordoned off in dams and rationed off bit by bit to those who have survived the harsh reality of the new world. Orphanages have sprung up on the outskirts (why on the outskirts, I do not know) of the desert, where the kids create a new sport called Skateball (similar to the one played in Rollerball), where everyone rolls around on skates and tries to slam a ball into a sophisticated hoop. One such team call themselves the Solarbabies, and they upset the warden because his favored team keeps losing to them. The Solarbabies are punished, but their plucky resolve sends them out of the orphanage and into the wastelands in search of their mascot, a formerly deaf child (played by Lucas Haas, fresh from Witness) who found a floating orb that has healing powers. The warden (Charles Durning) sends a representative of the E-Protectorate (the evil corporation that hordes the water supply) after the kids, but somehow we sense that the warden’s heart is softening toward them. It is the fascist-like representative who emerges as the film’s one-track villain. As played by Richard Jordan (who once played Clive Cussler’s character Dirk Pitt), the villain is one-dimensional in his hunt for the kids whose new discovery, the orb (the kids call it Bohdi), is rumored to put an end to all tyranny. There is roller-skating in the desert and some special effects to make it all seem like something’s actually going on some of the time.

Produced by Mel Brooks, Solarbabies has a meandering script and a dull pace. Like Spacehunter, this movie is a mishmash of genres and ideas, and like that movie, it could have been saved by a more interesting plot and screenplay. Still, I would choose this movie over most other big-budget high concept films that are made today. I dare a studio to try to make a movie like this today. Jason Patric and Jamie Gertz (who later paired up again in The Lost Boys) are the two heroic leads here. The music is by Maurice Jarre.

Kino Lorber has just released Solarbabies onto Blu-ray, and it’s a noted improvement over the old MGM disc, with upgraded high definition picture and sound. This is a movie that looks great in a clear, filmic grain, and Kino has met every requirement in bringing this to the next gen of hardcopy media. While there are no special features, the movie has never looked or sounded better.