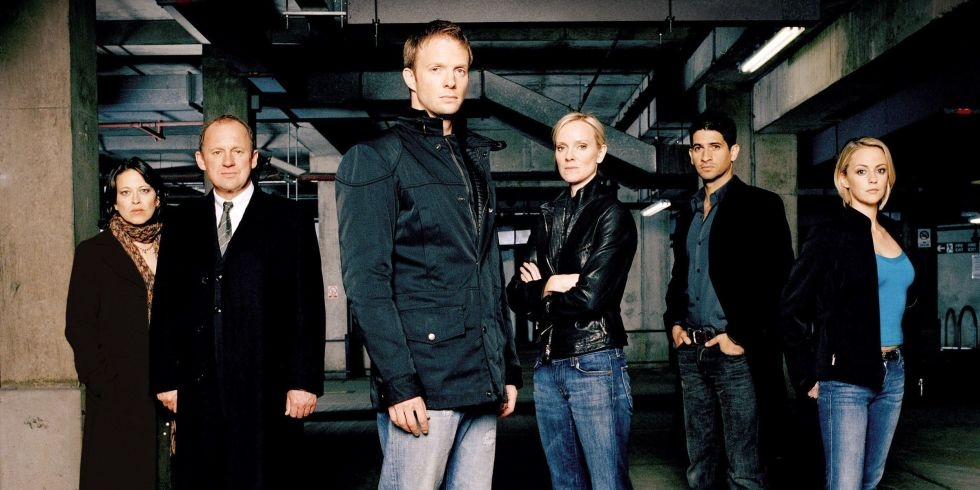 A beyond important UK crime-spy show that blends the drama of the original Mission: Impossible with the real-time suspense and edgy characters of 24.

Plot: This British espionage thriller centers on a team of MI-5 counter-terrorist spies collectively known as ‘Spooks’ because of the shadowy nature of their existence. Technically speaking, Spooks don’t even exist- they have no names, identities, or known locations. Yet these secret agents are all that stand between the nation and the terrorists who try to undermine national security. The threats are brutally unflinching and range from arms merchants to germ warfare.

Season 1:
Tom Quinn (Matthew Macfayden), a man struggling to deal with his double life as the top spy for MI-5 in London and is well-mentored by department head Harry Pearce (Peter Firth, The Hunt for Red October). Joining Tom in the field are Zoe (Keeley Hawes) and Danny (David Oyelowo).

At 6 breathtaking and well-paced episodes, this spy drama instantly earns an addicting spot as one of a well-rounded psychological and non-stop suspense with barely a moment to breathe or look away from such lovely intensity. If you must see any season, this is one for your eyes to witness but it’s impossible to stop just there given how it ends on a cliffhanger! Don’t say that you weren’t warned.

Season 2:
The national security increases and the need to thwart the terrorists operating within the UK becomes more urgent. Tom is investigating a Serbian terrorist plot when his girlfriend and her daughter are suddenly trapped in Tom’s ultra-secure house with a laptop-contained bomb. Meanwhile, another bomb kills the Secretary of State for Northern Ireland. The Home Secretary’s Security Advisor Ruth (Nicola Walker, Touching Evil) serves as MI-5’s intelligence analyst. Tom later learns from his American colleague that an assassin is in town, who the CIA also knows about but haven’t told MI-5.

Let’s just get this out of the way: this was going to be near impossible to follow up after Season 1 took off and impressed in all areas. Once it resolves the cliffhanger at the beginning, it falls victim to too much filler but still continues the winning chemistry between the three lead agents’ storyline later on while showing how Ruth and Harry may or may not be able to work together despite their otherwise professional qualities. As a result, I always feel like the show had too huge an episode order as most of the time there’s always at least a few episodes not entirely up to par. But this is still an overall respectable season, just not as fresh and new anymore.

Season 3:
Tom disappears following a shooting and new recruit Adam Carter (Rupert Penry-Jones) rises to the challenge in Section B. After recovering from his injury, Harry tasks Adam with proving Tom’s innocence. Later in the season, Danny and Zoe are sent on a deadly mission that has tragic consequences for one of them.

I preferred this season more so than the last one but there were still some lesser episodes in-between the gripping ones with unimaginable terror, exciting shock value and more tragic drama. I warned up to Adam rather well as the filmmakers do much of the same Law & Order transitioning method perfectly rendered to where nothing feels out of place and nothing is forced upon the viewer. It still had some stuff not 100% but it was still engaging as a whole.

Season 4:
This season finds the team reeling from the loss of one of their field agents but they’re thrown back into action when a bomb detonates near his funeral. Field agent Zafar Younis (Raza Jaffrey) and National Security Coordinator Juliet Shaw (Anna Chancellor) are introduced in a story involving a potentially devastating terrorist attack in the capital. Later on, the focus switches to a former MI-5 officer with a deadly grudge threatening the lives of everyone back at The Grid.

Now, we’re finally back to near the epicness of Season 1 but it still has a bit slower build-up when it should be ready to take off at full blast by this stage of the show’s run. Nevertheless, the terror plots are far more personally challenging, corruption themes are showcased more, the politics are more thematically compelling and while this show has always had serialized storytelling, it definitely felt like it went back to being a more personal show and less of a third-person viewpoint style. There wasn’t any tripping and falling this go-around but there was much better stuff right around the corner!

Season 5:
Harry and Adam begin to suspect that members of the British establishment are creating a crisis in order to bring about a change of government. Juliet encounters a car bomb and her life is changed forever. Former MI-5 turned MI-6 officer Ros Myers (Hermione Norris) discovers a shocking family connection to the season’s game-changing conspiracy.

By implementing more personal stakes and being less overcomplicated, the show is finally back to better organized missions and a better set cast that gels. And by being complex, dramatically rewarding and making sure everyone is fully used, it feels the best executed as a whole. Adam is such a gripping primary character and, with the extra insight given into his occasional rule-bending background, he almost makes one wish that he had been the lead character from the start. And the themes, villains and flashy editing all feel more mature here as opposed to doing what every other film/show was doing what was considered cool at the time. By doing this, we’re finally back to center stage and all the full attention is merited.

Season 6:
The relationship between British and American security deteriorates and loyalties change. Adam and Ros fight against an emerging terrorist threat and a deadly virus that could decimate London. This season breaks away from the case-by-case episodic format, with one dominant storyline tying all the action together.

The great plotting, sweat-inducing suspense and unthinkable terrorism disasters are in not only no shortage but pumped up at full-blast. Much like Season 5, there is a desire to still do new and different tales while never lacking in taking risks. And at this point, the show is 100% comfortable with its tone and style.

Season 7:
Harry secures the release of Lucas North (Richard Armitage), a MI-5 officer imprisoned in Russia for eight years. It’s not long, however, before Ros begins to suspect Lucas’ loyalties. The rest of the season deals with a top secret Cold War-era operation named “Sugarhorse.”

More attention is given to the undercover struggles, trauma and chaotic field ops for supporting spies Portman (Miranda Raison) and Kaplan (Alex Lanipekun), who have been with the show in key segments since Seasons 4 and 6 respectively. This season flows easily the fastest while showing again that no one us safe from terrorist harm and by making the double agent Lucas quite a fascinating character in his own right.

Season 8:
Harry is kidnapped by the Russians and a mysterious organization named “Nightingale” is the ongoing focus. And Lucas’ relationship with CIA agent Sarah Caulfied (Genevieve O’Reilly, Star Wars: Revenge of the Sith) reignites concerns over his loyalty.

From the ground running, we have a twisted uranium arms deal going down and immediately pick right up from
Season 7’s spellbinding cliffhanger. The show is not slowing down for any reason and is already having enough changed up missions for each spy character to stay busy (and viewers to remain glued in).

Season 9:
Harry learns of a shocking betrayal at the highest level after attending a funeral for one of the main agents’ funerals. And the agents go after Somali terrorist Hussein Abib (Peter Bankole) while a scandalous secret from Lucas’ past is unveiled. Then a growing bond develops between Ruth and Harry. New agents Beth (Sophia Myles) and Dimitri (Max Brown) are also introduced.

Much like the Season 7 premiere, the Season 8 finale was blood-soaked and ended the life of yet another agent on the team. The quality isn’t out the window though and there’s little breathing room as the missions get far more complex in the most fascinating way. At this point, the show is having every single character (new and old) be involved every step of the way and despite beloved characters dying, there’s no reason to tune out in quite a rare display of solid thrills and third person story arcs. Every other show has gone south when eliminating its beloved key cast yet the scenarios, deadly style and continuing personal subplots are well structured making it impossible to give this up. The new cast additions don’t feel like cheap replacements and due to them not being 10% trustworthy or good at their job, that only adds to the drama in a good way, instead of being excess crud.

Season 10:
Harry return to his post as head of Section D, wherein his Russian opposite, Ilya Gavrik (Jonathan Hyde, The Mummy), proposes a strategic partnership between their countries. New “spooks” Erin (Lara Pulver) and Calum (Geoffrey Streatfield) join the fight to prevent all enemies of the alliance from sabotaging the plan and instigating a war.

The final season entry has the exact same “old dog on the verge of retirement” vibe while again adding more beloved car chases and shocking tragedy. There is some fan service for full-time viewers while also making a careful reflection on how far most of the characters have made it thru these perilous affairs. This show was anything but overstayed and even the toughest dude might find himself sad for a few days even, it’s that heartfelt in its material.