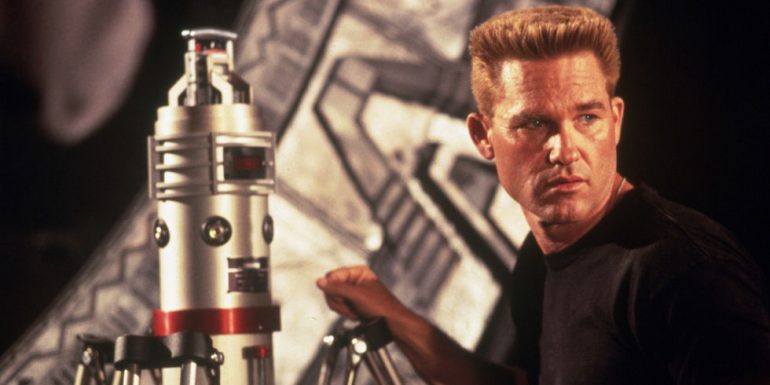 Stargate is a classic sci-fi/action movie with a great cast, original story, awesome music and great action scenes. Love it!

Plot: “An interstellar teleportation device, found in Egypt, leads to a planet with humans resembling ancient Egyptians who worship the god Ra.”

Review: This is one of my favourite movies; you’ve got Kurt Russell, great effects and awesome action. I always wanted a sci-fi/action movie based around ancient Egypt and this answered those desires quite nicely.

It’s essentially “Arab Spring” the movie with an enslaved race who are shown that they no longer have to be slaves and overthrow their evil alien dictator: Ra.

There are some really nice touches, like the scenes between the soldiers and the slaves as they try to communicate with each other despite the language barriers.

The writing is especially strong for Kurt Russell’s character Col. Jonathan ‘Jack’ O’Neil, a man devastated by the accidental death of his son. Riddled with guilt he volunteers to go on a one way trip through the Stargate and to destroy whatever is on the other side. When he discovers a race of enslaved humans, his plans change.

At first, Russell’s character is rather unsympathetic but as the story continues, his defences unravel and he befriends one of the enslaved boys; the boy essentially replaces his lost son, thus giving O’Neil the redemption he needs to go on living.

Russell also gets to give one of the all-time great one-liners: “Give my regards to King Tut, Asshole!” YES!

James Spader plays the stereotypical nerd (who has allergies) Dr. Daniel Jackson and ends up joining the military guys as they investigate the Stargate; he’s very likable in the role and even gets to bed himself a hot foreign girlie for good measure.

Jaye Davidson is perfectly creepy as Ra and you really hate him in it, he’s just a great villain and you count the seconds until his (rather spectacular) demise.

You’ve also got an early role from Djimon Honsou as one of Ra’s henchman, not a huge part but he’s always a welcome addition to any movie.

The costume and set-design are amazing and I love how Ra’s disciples wear the masks of Anubis and Isis.

The visuals are fantastic, but the best thing about the movie is David Arnold’s classic score. It’s sort of a mixture of Star Wars and Indiana Jones with a theme tune that will stay in your head long after.