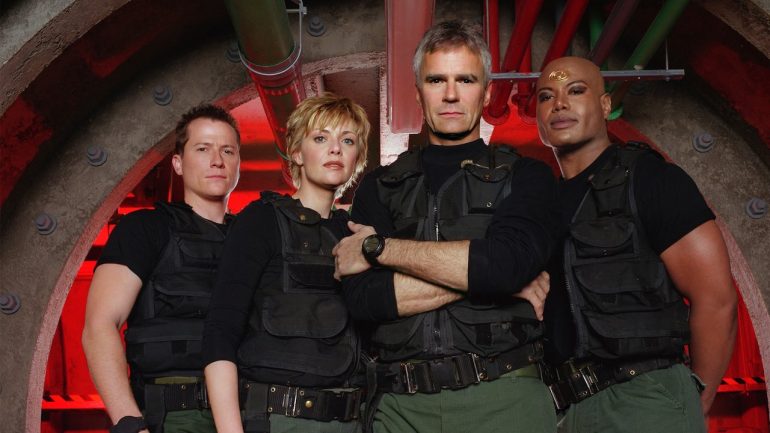 Stargate SG-1 had something for everyone from good characters, regular action and fun stories it still holds up as a huge entertaining series.

Arriving on Abydos with his team, O’Neill meets up once again with the scientist, who has discovered a giant elaborate cartouche in hieroglyphics. All signs point to the fact that this is a map of many Stargates that exist throughout the galaxy – a development that makes the dream of the SG-1 team to travel throughout the universe in time a reality.

Joining the team in their wild adventures are the intelligent Capt. Samantha Carter (Amanda Tapping, The Haunting of Lisa) and catch-phrase laden Jaffa alien warrior Teal’c (Christopher Judge, Sirens) as they fight Anubis and other recurring villains threatening Earth.

The show ends up being vastly appealing once you get past the rocky first three episodes due to being a fun mixture of Indiana Jones, Aliens, Babylon 5, Star Wars, Terminator, X-Files, Star Trek and even MacGyver(!). The series all throughout is perfectly lensed and is at its best in both its quiet and intense moments due to the writing being perfectly outlined to complement the cast’s winning chemistry and lovely balance of Action, Sci-Fi, Mystery, Drama and Comedy. It helps that the show is bringing something new for genre lovers and even sneaks in amusing Easter eggs and recurring gags to make for another unpredictably entertaining thrill ride.

The first three years, the team must face off with Goa’uld alien and galaxy war monger Anubis (Peter Williams, Jungleground) and the Replikator robots throughout. There are plenty of stand-alone episodes that are essential Sci-Fi viewing due to having rather hard-hitting winning themes and balancing the perfect mix of grit and philosophical epicness.

Thus is where we hit a bit of a gap in the road. This continues some of the same epic plot arcs but never truly captures either same energy nor captivating momentum. A few times a season there are always either stand-alone episodes or stock footage laden episodes that served, at the time the show was syndicated, to catch up various viewers and likely serve production to save money.

There is FAR too much of that this season and other than a few mild character introductions, significantly distant from the rest of the overall show. There’s also a few lesser quality episodes as well as ones that feel like rejected scripts from other popular Sci-Fi/Action shows around the same time. Overall, the show never feels like it’s going downhill or unwatchable, but it’s clearly had its share of hiccups thus go-around.

The show resumes doing much of what is beloved about it whether it’s the various quibbles between O’Neill and Teal’c, the various internal and external conflicts that Sam and Jackson both face or the countless political and alien conspiracies they come across. Despite the show being dropped by Showtime Network after it’s fifth season and later being picked up by the Sy-Fy Channel for the remainder, there is no sign of quality dropping, not even from a production or writing perspective.

There are other characters that later became a huge part of the story who were disliked at the time by some of the fanbase but that’s either because they were comparing them to the characters they mistook them as replacing, when in fact the show was always an ensemble cast. And as far as the stories continually setting up new challenges and considering the various times the crew had to write in new material to compensate for various cast members having to leave for various reasons, at a closer glance, the show never shows signs of being on its last legs and overstaying its welcome.

The comedic timing, battle scenes, sci-fi mumbo-jumbo and camerawork only keeps improving too. For all sci-fi aficionados, you’d be amiss to not eat this lovely piece of cake which leaves a flavor you’ll never forget. Its a show with something for everyone, even the teens.

Despite the show being off of Sy-Fy and the various FOX affiliate channels for years, the DVD and Blu-Ray releases have always proven to be best sellers, and are even complimented by their cinema look and never having any moments where its clear that they had to break for commercial time.

MGM has “Indeed(!)” allowed the shows to be featured on their Stargate Command streaming platform. I recommend that Amazon Prime members stream it for free on that app and experience the lovely Widescreen HD quality. The Hulu versions are pathetic and should be avoided as not only do you have to encounter the mandatory ad breaks but the copies they have are ridden with the Fullscreen network versions, sometimes with TV ratings, channel logos and glitches that occur each ad break.