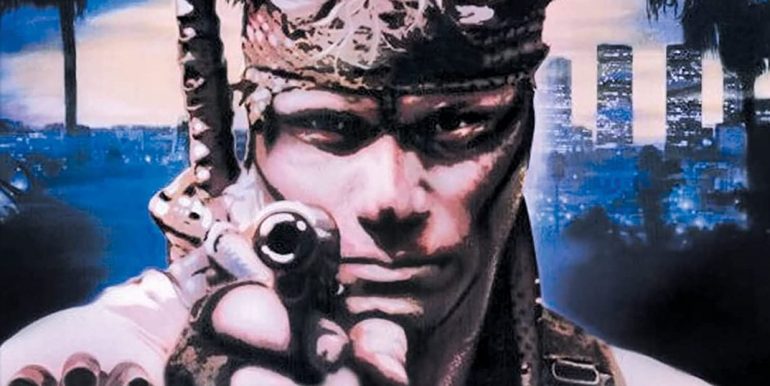 Steele Justice is the kind of film we just don’t see anymore and it’s an absolute riot with Martin Kove clearly enjoying himself. Kino’s new Blu-ray has enough special features and a decent upgrade for it to be worth adding to the collection.

Plot: A Vietnam vet turned cop is out for revenge for the death of his partner and there will be HELL to pay!

“He isn’t being recruited: He’s being unleashed!”

Review: Martin Kove’s answer to Rambo has him playing a badass Nam vet named John Steele. In Nam, Steele crossed paths with a Viet Cong general (Soon-Tek Oh) who was given asylum by the U.S. Years later, Steele is a burnout cop, whose best friend and partner, Lee (Robert Kim) is killed by a drug cartel, run by Oh, who has used his political influence to gain power on the streets. The general has a cadre of rough and ready bodyguards and “yes men,” some of whom are played by action film’s greatest Asian actors and stuntmen (Al Leong and Peter Kwong among them). Ronny Cox plays Steele’s boss, who understandably can’t keep a leash around his officer, but it’s amazing that no one has the balls to fire Steele because he’s out of control! Steele arms himself with all sorts of guns and artillery, and in the film’s best scene he shoots his gorgeous wife (Sela Ward) at point blank range for getting in his way (turns out, it was part of his plan).

Steele Justice belongs on a short list of insane action films. Other films on the list might include Stone Cold, Invasion USA, On Deadly Ground, Tango and Cash, and Death Wish 3. People like John Steele only exist in action films from the 1980’s and early 1990’s. That’s a good thing. Kove is fun in a role he must have enjoyed playing. The Vietnam scenes are goofy and almost slapstick. Just before he kills someone, he says his tagline, “Good morning!” Robert Boris was the director.

Kino Lorber has just reissued Steel Justice on Blu-ray, and they’ve upgraded the special features to include a brand new audio commentary with director Boris, star Kove, and a film moderator historian. The disc also includes the trailer. The high definition transfer is more than adequate, and Kino has added a slipcover as well this time.