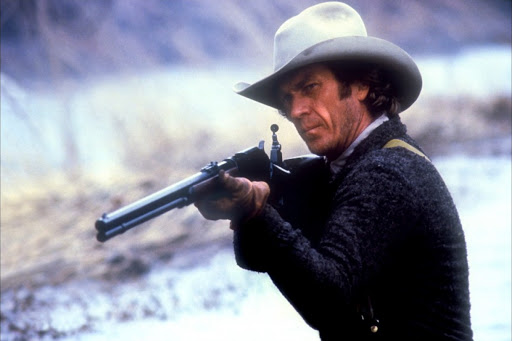 During the 1960’s, Steve McQueen established himself as one of Hollywood’s biggest stars and action leads in iconic fare like The Magnificent Seven, The Great Escape and Bullitt. Always a competitor,  McQueen was into women, engines, racing and martial arts. Bruce Lee wanted to be Steve McQueen the way McQueen wanted to be Paul Newman before him. Lee and McQueen crossed paths in social circles along with Lee training McQueen and McQueen later serving as a pallbearer at Lee’s funeral.

By the late 70’s, Steve McQueen was mostly retired after the massive success of 1974’s The Towering Inferno, where he had top billing over former self-imposed rival Paul Newman and they both were paid a cool $1 million bucks. Owing a film to First Artists, McQueen set out to stage a comeback of sorts with Tom Horn, an epic saga detailing the life and final moments of the former Army Scout who captured Geronimo and served with the Rough Riders. Due to his diminished star and competing projects (one that would eventually become a TV mini-series starring David Carradine), a $10 million budget became $3 million and the life spanning story edited down to its final chapter.

Based on Tom Horn’s own writing, the film picks up in 1901 where he was a man seemingly out of time with violence increasingly frowned upon and a western frontier being tamed by barbed wire, railroads and civilized settlers. Horn is hired by local businessman John Coble (Richard Farnsworth) to stop the cattle rustling impacting Coble and neighboring ranchers “The Association”. But Horn does too good a job as he warns would be rustlers in one scene then tracking, stalking and killing them the next. 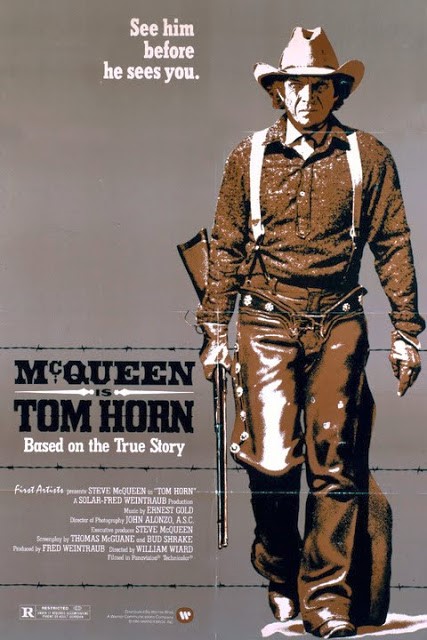 Having worked with Bruce Lee on Enter the Dragon, producer Fred Weintraub was brought in to help manage the tumultuous Tom Horn production that had already seen director Don Siegel (Dirty Harry) and several writers leave the project due to McQueen’s demands and attempts to be truthful. Weintraub refers to McQueen as a “pain in the ass” similar to Bruce Lee (hmm, macho leading men who are hard to work with pattern emerging). In the end an inexperienced director was brought on, fired after three days and replaced by TV director William Wiard while being ghost directed by McQueen with writing credited to Thomas McGuane and Bud Shrake.

In what would be McQueen penultimate film, Tom Horn is a spare affair with no huge gunfights, sweeping score or majestic backdrops but works well to show off the vast, mostly empty country of fields, farms and small towns. There are some surprisingly hard-bitten moments throughout like the aforementioned rustler track down, a farmhouse shotgun battle and in particularly shocking sequence when Horn tracks down a rustler at a remote cabin. The pissed off rustler shoots first, hitting Horn’s horse to which Horn responds with a rifle blast straight to the head! Realizing his horse is dead, Horn walks to the body, fires point blank multiple times and lets out a vengeful “You killed my horse, you son of a bitch!”. Cut to Horn walking away from the cabin now engulfed in flames…that is how you take care of business!

Tom Horn did not light the box office on fire or win over any critics upon release. It’s not as showy as say John Wayne’s final western The Shootist but McQueen was always going for “real” with his films and performances. Weintraub mentions cutting out a lot of dialog and replacing them with nuanced “yups” and “nopes” but watching the film, Horn delivers plenty of dialog throughout in a generally neutral/uninformed manner as he gets drunk, doesn’t know what a lobster is and doesn’t know or care he’s being set up.