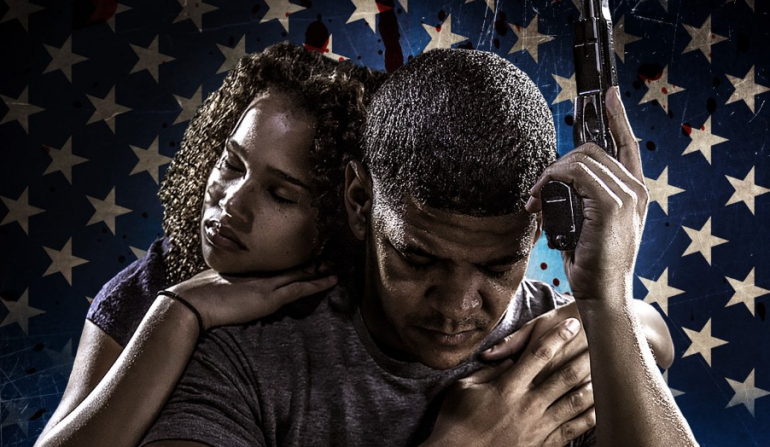 One of the far more engaging one-many-army films that takes the rare time to both look professional and maintain the average viewers’ interest.

Review: I mainly checked out this film because the trailer looked professional, it was by some indie Dallas movie scene peeps and even had a buddy of mine, actor-comedian Fabian XIV in a minor gunned down henchman role. Was the film actually delivering or was it another waste of time for streaming/physical media consumers? Fortunately it was the former as the film didn’t have what every other indie film seems to have which is having too many characters to keep track of, over-edited montages, doing too much than what it can accomplish on a restricted budget or a lousy cast. Because it doesn’t have any of those negative factors occurring, this film ends up being a blast (no pun) and moves along rapidly and before you know, it’s already concluded.

The battles that the character is scarred by are barely seen but the foley is very effective at showing what he’s haunted by; the politician and crime lord’s plotlines were easy to accept but not overbearing; the R-rated action and nudity didn’t feel exploitative or like the only thing this movie had going for it; and the fight scenes moved the film along instead of feeling like they were overstaged and only reminded one of how low-budget this indie was.

The film screened briefly in a few limited DFW theaters but would be good to have be in one of those 5-pack of other Action films. It isn’t a Maverick Home Entertainment venture nor is it a bottom of the barrel suckfest worthy of like anything by Troma; if anything, it’ll remind one of the better Lionsgate/York/Sterling Entertainment/Millennium Films/Emmett-Furla offerings. Comparisons aside, it’s just a straightforward film and doesn’t stall nor negate what it is and is suppose to do. And any indie that doesn’t bullshit around and try to be too clever deserves a viewing I’ll say!