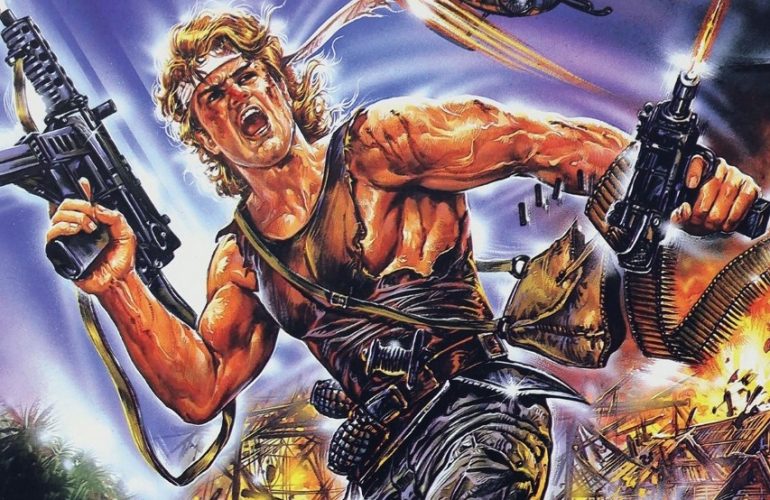 Strike Commando 2 is not nearly as balls-out as the first film, but still just as goofy and fun; this Blu-ray is a recommended purchase for fans of the movie as it’s never looked better.

Plot: Mike Ransom, the Strike Commando, is back in an all-new adventure that has him teaming up with a spunky tavern owner in the Philippines to save Ransom’s former commanding officer.

Review: Plagued with PTSD and boredom, former Strike Commando Mike Ransom (a role originated with Reb Brown, but played this time by Brent Huff) has become an expat living in Central Asia when he’s visited by a friend who tells him that their commanding officer Major Vic Jenkins (Richard Harris lending his gravitas to a one-note role) has been killed, but not really because the CIA or the KGB have secretly staged his death to use him for some kind of ransom for a bag full of priceless diamonds. It’s confusing, and Ransom is confused about it, but he picks up his rusting artillery and goes full blazing to find out what happened to Jenkins, who saved him once in ‘Nam. When Ransom’s Rambo-styled approach gets him a sit-down with some shady government spooks, he’s told that Jenkins is alive, and he doesn’t understand the reason why there’s been a need to make it seem like he’s dead, but it doesn’t matter because he’s already off on another mission: To rescue Jenkins from a concentration camp in the middle of a jungle! Ransom teams up with a wisecracking, foul-mouthed blonde rapscallion who runs a rough bar in the sticks (her opening scene is straight out of the drinking contest scene from Raiders of the Lost Ark), and after they fight off a bunch of ninjas (!), they’re off together to spring Jenkins from the torture chamber he’s in. Turns out Jenkins is a villain (no surprise), and when Ransom has been double-crossed he’s going to go ballistic!

Not nearly as balls-out as the first film, but still just as goofy and fun, Strike Commando 2 features a highly energetic Huff in an extremely physical role that appears as though he never had a stuntman in the movie. He jumps, he tumbles, he kicks, yells, flies around the jungle like Tarzan, and does the sort of thing no Hollywood studio would have allowed a star to do without a stuntman. He’s the best thing about the movie, and while the film itself rips off Raiders of the Lost Ark (a lot) and Rambo II, it also has a little breathing room of its own. The biggest detriment to the film is the leading lady, played by the Swedish Miss World of 1977 Mary Stavin, simply because she can’t make her character appealing. She curses, yells, growls, and can take a punch, but she’s not really charming the way Karen Allen was in Raiders was, for example. Director Bruno Mattei once again throws as much as he can at the viewer with this one, and it’s a hoot, but not a classic.

Severin’s new Blu-ray release of Strike Commando 2 looks and sounds really crisp and clear (better even than their release of Part 1), and comes with a fun on-camera interview with Huff, who jovially jokes around about his experiences making the movie. A perfect companion piece to the first release from Severin, this is a recommended purchase.