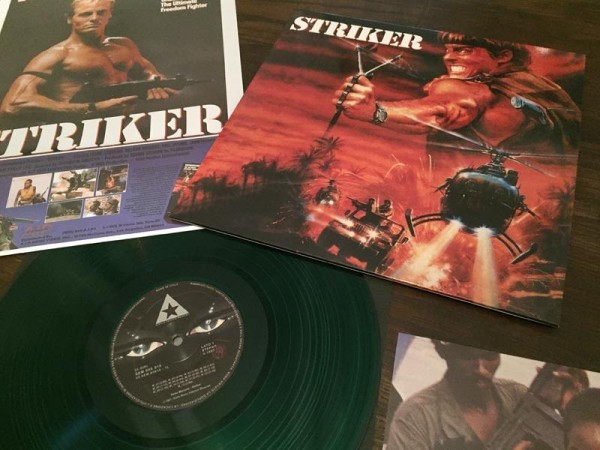 The soundtrack to Striker is the most awesome release you’ll see all year.

Review: Berlin-based soundtrack label Private Records has been quietly producing soundtracks from the golden era of Italy’s exploitation boom from the ’70s and ’80s, and their first notable release of 2016 is Detto Mariano’s synth-heavy score to the Frank Zagarino-starring action film Striker. This is the very first time (EVER!) this score has been released and Private Records has produced the album only on vinyl in two separate (equally awesome) editions. But first – here’s what the movie is about:

Mercenary John “Striker” Slade (Frank Zagarino) is bamboozled into undertaking a Rambo-esque mission to Nicaragua to rescue a captured American journalist, played by John Phillip Law. His contact in the war-torn, chaotic Nicaragua is a foxy militant (Melonee Rodgers), who is a lot like the doomed female character in Rambo: First Blood Part II in that she’s vulnerable, but good with a machine gun. Together, they traverse rivers, traipse through jungles, and get shot at and clobbered by enemy soldiers. Slade, however, isn’t a man to go down easily, and even though he fails his mission (and says, “I hate violence” at the end), he lives to fight another day.

From the Italian exploitation film market and director Enzo G. Castellari (1990: Bronx Warriors), Striker has an undeniable appeal to fans of one-man army movie adventures. For one, Striker’s weapon of choice is a slingshot that chucks small exploding bombs! Zagarino had just broken out on his own to pursue a career in action movies (he’d previously co-starred in the sword and sorcery flick Barbarian Queen), and Striker was his first solo vehicle out of the gate. It’s pretty good if you like these Italian-made actioners, and one of the signature elements of the film is Detto Mariano’s score. It has a catchy theme, with nicely structured patriotic motifs, and over the course of the 28 tracks that comprise the complete soundtrack album, his music builds to an appropriate crescendo that is neither bombastic or overkill. The music has a nice rhythm, and when it’s over you want to play it all over again. There’s even some sound effects and dialogue on the album, so the listening experience is pretty immersive.

Private Records has pretty much gone out of their way to ensure that their release of the soundtrack to Striker is the most awesome release you’ll see all year. The deluxe “Survivor” edition is outstanding: It comes with a poster, insert, a high quality knife (!?) with a grindstone (complete with a compass in the stock), and a survival kit and belt bag to strap to your leg. Incredible. The other option is you get two soundtracks (the other one is Eaten Alive), for a decent price, but you don’t get the knife. The “Survivor” Edition is limited to 50 copies, and the other edition is limited to 250 copies, so order now via Private Records or Discogs.