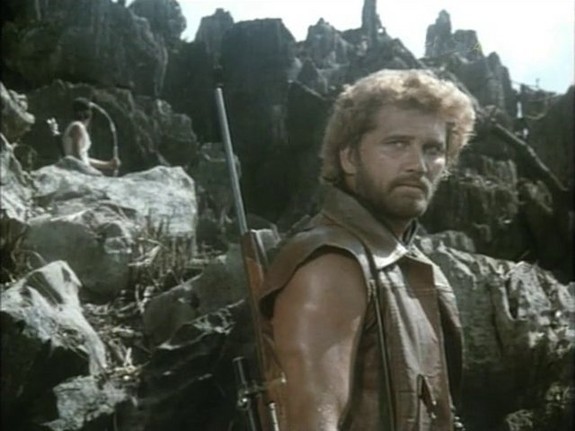 Well worth the purchase, Stryker is going to be a hard title to beat for home video releases in 2017.

Synopsis: The world’s water supply has dried up due to some sort of apocalypse. A beautiful woman holds the secret to where one of the last springs being guarded by a group of Amazons. A “Road Warrior” like crew captures her and tries to make her talk through brutal torture. The hero (Styrker) unites with some of the remaining “good guys” and the Amazons and frees the woman.

Review: Ah, the glorious post-nuke wasteland of the future. It’s dry and hot, and scavengers roam the unpaved roads scouting for the only thing that matters anymore: water. Stryker (Steve Sandor), a stalwart hero without any ties to the fledgling societies still trying to rebuild, intervenes when some land pirates try to snatch an Amazon warrior (played by Andrea Savio), and he befriends another renegade hero named Bandit (William Ostrander) in the process. The Amazon doesn’t make it far on her own, though: She’s captured and systematically raped by a band of cutthroat raiders under the thumb of the local warlord Kardis (Mike Lane), and so Stryker and Bandit team up to save her because she’s their only real lead to a water spring hidden in the mountains. With the assistance of a tribe of midget warriors, Stryker and Bandit save the girl, find the water spring, and incite a war with Kardis and his horde of thirsty raiders.

The first of a bunch of post-apocalyptic Road Warrior riffs from Filipino filmmaker Cirio Santiago, Stryker is still the best of at least eight or nine apocalyptic exploitation films that he made, which also include Bloodfist 2050 and Water Wars, which was his final project. Stryker offers the best of Santiago’s post-nuke heroes, with a strong Sandor in the title role. It’s as sleazy as the rest of the efforts Santiago made (there’s always rape or nudity), but this one stands out for not having any reused footage in it to pad out the time, though his later post-nuke movies used footage from this to pad out their times.

Long unavailable on DVD, Stryker had been a VHS rarity for several long decades, but now Kino Lorber has just released it onto stunning high definition Blu-ray as part of their “Studio Classics” series. It’s never looked better with ultra clear picture and audio (and the end title music plays over the menu screen, which is cool), and there is a chatty audio commentary option as well, with filmmaker Jim Wynorski who personally knew Santiago and completed his film Water Wars. Well worth the purchase, Stryker is going to be a hard title to beat for home video releases in 2017.