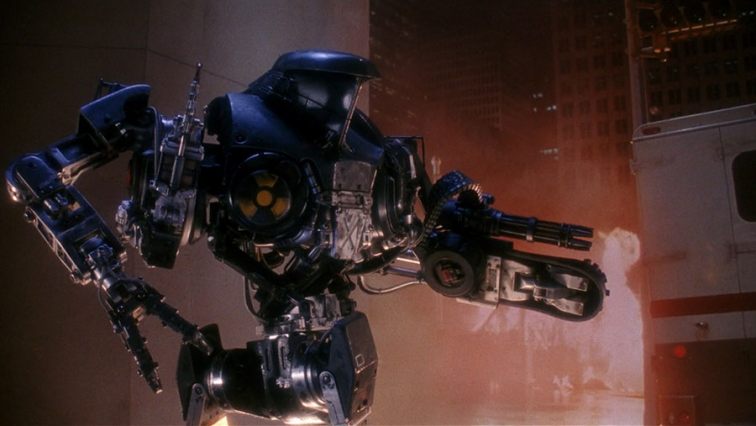 Plot: Cyborg Detroit policeman Alex Murphy (Peter Weller) is the sole officer on duty after the police force goes on strike against evil conglomerate Omni Consumer Products and its push to foreclose on the city of Detroit. Aside from dealing with the normal level of crime, Murphy must take on crime boss Cain (Tom Noonan), the spread of a dangerous new drug called “Nuke” and the attempt by psychologist Dr. Juliette Faxx (Belinda Bauer) to create another Robocop using a hardened criminal.

Well, it seems that the internet rioters incensed over Ben Affleck playing Batman have shifted their focus to the trailer for next year’s “RoboCop” reboot, which debuted online a few days ago (for the record, I think he’ll do just fine as the Dark Knight; I loved “Man of Steel” so much, Zack Synder and co will have to try to screw up “World’s Finest” in order for me to lose faith in them!)

Anyhow, the recent trailer prompted me to take another look at the original “RoboCop” films, as I’m sure it did for most people who saw it. The general consensus about the original series seems to be that the first one is a classic and the third is an epic fail of historic proportions, both of which I agree with. According to his IMDB page, Peter Weller claims that he’s never even seen “RoboCop 3″; if I ever meet him, I give him a pat on the shoulder and tell him that’s he’s not missing anything.

What really surprises me, though, is how little love the second movie has received over the years. It currently sits at 33% on Rotten Tomatoes, and both Peter Weller and Nancy Allen were less than happy with the film, as well. It may surprise people to know that it’s actually my personal favorite of the “RoboCop” series.

Part of that has to do with how much more light-hearted it is than it’s predecessor. Don’t get me wrong – I love the first “RoboCop”, but it’s a very nihilistic vision of the future. And I know that’s the general idea of the film – it is social satire, after all – but in my opinion, “RoboCop 2″ does a better job of satirizing America’s runaway capitalist culture because it makes an effort to be upbeat and even more humorous, in it’s own way. It’s just a bloody and gruesome as the first film, but it’s also a much less dark and depressing film. To quote Morgan Spurlock, nobody likes to be poked with a stick, but everyone loves to be tickled with a feather.

I get the feeling that the real reason that so many people hate “RoboCop 2″ is essentially the same reason I like it – it’s much more comic booky than the first film and has more of a superhero feel to it. The fact that comic book legend Frank Miller, the man behind “The Dark Knight Returns” and “300”, was the screenwriter of the film probably has something to do with that. “RoboCop 2″ is much more fittingly seen as a superhero film than the other two (that stupid rocketpack in “RoboCop 3″ notwithstanding.) The stakes are higher, the action showcases RoboCop’s superhuman abilities to a much greater extent than it’s predecessor, and of course, it has a true supervillain in the form of the nefarious drug-lord Cain, who later becomes the psychotic cyborg Robocop 2.

And when he does become RoboCop 2, he is a force to be reckoned with. You can tell just from looking at both of them that they were designed by different people with different agendas. RoboCop was built by Bob Morton in the first movie; the guy was hardly the most likeable character in the movie – in fact, he’s a pretty big douche – but he built RoboCop to fight crime, and consequently, RoboCop looks like he’s built for law-enforcement. RoboCop 2, on the other hand, was built by Dr. Crazy Cat Lady aka Dr. Juliette Faxx, a supposed psychologist who reminds me of the scene in “Batman Begins” when Carmine Falcone asks Johnathan Crane/the Scarecrow, “When did the nut take over the nuthouse?”

Only a deranged, completely unhinged fruitcake could cook up her plan for designing RoboCop 2 – take the brain of a volatile, demented sociopath completely dependent on a drug called NUKE and who has, in her own words, “delusions of godhood”, and put it into the body of a cyborg stuffed with enough live ammo to reduce Rhode Island to a pile of ashes. Oh, and he’s also twenty-five feet tall and looks like the kind of robot you’d find in some futuristic version of Nazi Germany! What could POSSIBLY go wrong?

Seriously, though, are you surprised? OCP is, after all, the same company that built ED-209, and their engineers had the brilliant idea to give a demonstration of his law-enforcement capabilities in a crowded boardroom meeting without taking even one bullet out of those plasma canons he has where his arms are supposed to be. And we all know how well THAT turned out! The overall message of the “RoboCop” series seems to be that scientists will be unimaginably stupid in the future!

Joking aside, I do love the more superheroic tone of “RoboCop 2″, and the fact that he faces a truly challenging embodiment of pure evil in the form of Cain/RoboCop 2. It’s a little sad that stop-motion animation has fallen out of fashion today, since the “RoboCop” movies really perfected it, and it makes the final fight between both RoboCops really spectacular. And, frankly, I don’t think it’s an accident that the supervillain’s name is Cain, either!

So, as we prepare for the updated take on “RoboCop” next year, I must say that I do still really enjoy the first two film in the series, and in my own estimation, the second one I enjoy more than most. Maybe it’s the fact that it’s more upbeat and less cynical that it’s predecessor, maybe it’s the shock of seeing the Old Man suddenly turn into Lucifer after being relatively harmless in part one, maybe it’s Cain smart-mouthed little sidekick or the douchey lawyer who looks like Mitt Romney that gets under everyone’s skin. But I firmly believe that “RoboCop 2″ is an underrated sci-fi action flick that has aged extremely well over 23 years; I can only hope that I end up enjoying the “RoboCop” reboot as much, and if you don’t like me using “RoboCop 2″ as the point of comparison for the reboot, well, sue me!