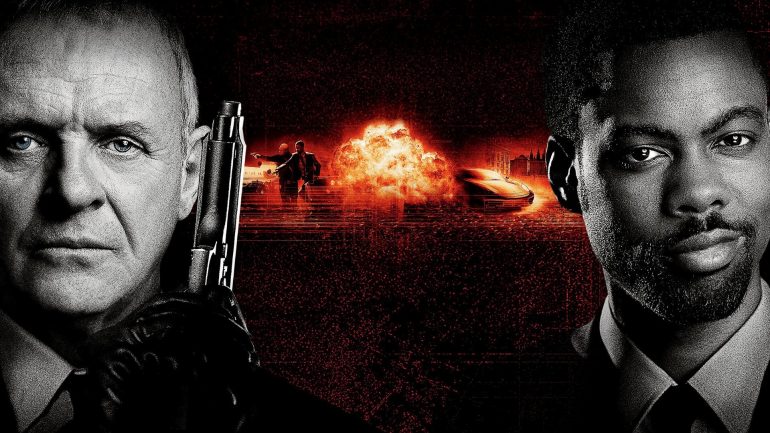 Plot: When a Dartmouth-educated C.I.A. Agent is killed during an operation, the secret agency recruits his twin brother (Chris Rock), an African-American street-wise hustler with no idea what’s coming for him. The C.I.A. wants the twin to finish a project on which his brother was working. But this street-wise twin has absolutely no experience, so the agency sends in experienced Agent Oakes (Sir Anthony Hopkins) to train the twin how to act and talk like a real C.I.A. Agent.

Here’s a confession, I’ve never hated Joel Schumacher as a director; I actually like Batman Forever, but that’s just me.

This is another one of his movies that went under the radar, but is a very fun and underrated film that everyone should check out.

Our two leads (played by Anthony Hopkins and Chris Rock) have surprisingly great chemistry with each other and this is coming from someone who’s not a fan of Chris Rock, but I actually liked his character and thought he was likeable. Hopkins is a good contrast to Rock, but even has fun at certain moments.

The rest of the supporting cast also does a solid job, especially Gabriel Macht who I’ve always liked (even in The Spirit, but even he didn’t save that one), and it’s always great to see Peter Stormare anytime he’s on screen.

The action is very solid, especially at the end when it gets really exciting; it’s very well shot and edited. It’s also got a good score behind it by  Trevor Rabin, who I always liked as a composer.

My only problem was the pacing is a little slow in the middle, but that didn’t ruin it for me and I still  consider Bad Company an underrated action comedy. It has two leads with great chemistry, impressive action, a good score, is well directed by Joel Schumacher, and moves at a pretty good pace.

So Sue Me! I love Bad Company and if you don’t then I guess I’ll see your ass in court.