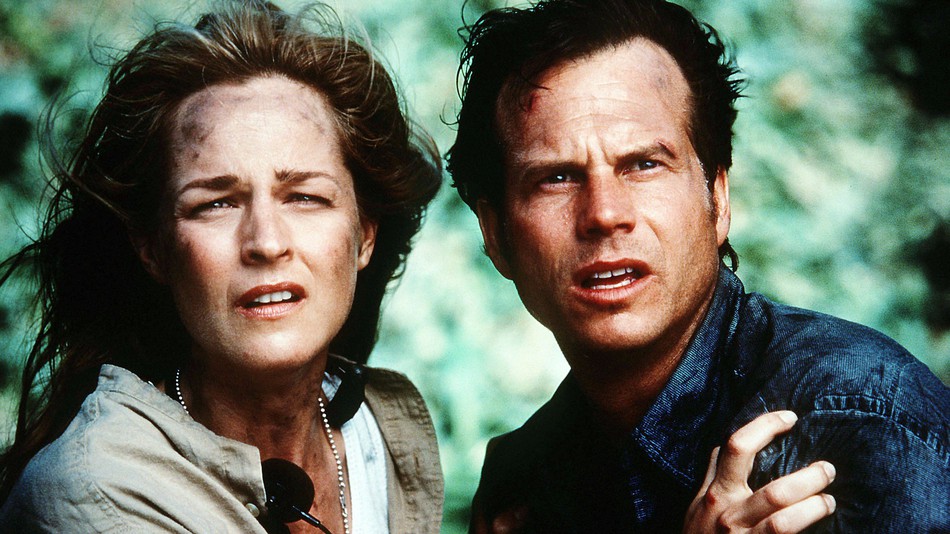 Plot: During the approach of the most powerful storm in decades, university professor Dr. Jo Harding (Helen Hunt) and an underfunded team of students prepare the prototype for Dorothy, a ground-breaking tornado data-gathering device conceived by her estranged husband, Bill (Bill Paxton). When Harding tells Bill that Dorothy is ready for testing — and that their privately funded rival Dr. Jonas Miller (Cary Elwes) has stolen the idea and built his own — Bill rejoins the team for one last mission.

One of my greatest fears is a tornado, I mean who relishes the thought of getting sucked up into a swirling vortex?  Hence the irony of my love for the film Twister.  When my children were growing up, every time it rained we would pop this movie in the “VCR”, curl up and “veg out” while we wasted 113 minutes of our lives watching this predictable romp.

It was hopeful to expect more from this film at the onset.  It stars one of my favorite actresses Helen Hunt whom I have loved ever since she played the starring role in “Quarterback Princess”.  The director, Jan De Bont also directed another action staple “Speed” with Keanu Reeves.  The movie has an exciting premise:  a natural phenomenon beyond any control wreaks havoc and a group of “storm chasers” spend their day trying to place a meteorological device in its path so it will suck it up and allow the device to record data from inside.

To love this film, the viewer has to overlook a lot.  The dialogue is terrible.  There is a frequent need to shout out characters names repeatedly:  “Jo!!” “Aunt Meg!”  “Bill!” There are continuity errors in the film that a novice moviegoer can detect.  For example, there is a scene where farm machinery is being thrown about which we see clearly break the windshield of the truck our main characters are driving. In all of the scenes after, the windshield is intact! As for some of the acting, don’t even get me started on the awful southern accent that Jami Gertz tries to deliver.

But despite all this, the movie is absolutely fun!  There are silly characters yes, notably goofy storm chasers Philip Seymour Hoffman and “Speed” alumni Alan Ruck but they provide the comic relief.  The CGI was groundbreaking for its day and the tornadoes look pretty real.  There is no need to overthink the film and it is easy to feel like you are on an amusement park ride.  But the “piece de resistance” is a great tune in the film with Van Halen singing “Shine On” giving the feeling of an old school MTV music video.