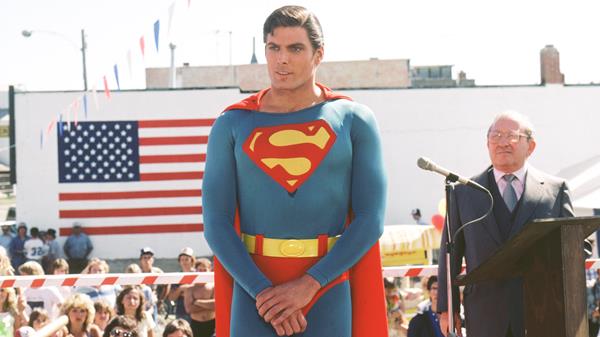 Superman III has plenty to enjoy like evil Superman, drunk Superman, Clark vs. Superman, Superman vs. missiles, Superman vs. machine and cyborg but on the other hand it also has Smallville, Richard Prior, lame villains and a slow middle.

One of the two infamous “bad” Christopher Reeve Superman films (the other being Superman IV: The Quest For Peace). Superman III might be best known for Superman turning into a belligerent drunk after being subjected to the rays of a fake kryptonite rock created by Richard Prior. Superman gets hammered,  mashes booze bottles by flicking peanut shells at them and melts a mirror with his eye lasers, disgusted by the sight of himself. Despite traumatizing children when it first came out, watching this with adult eyes I’m kind of astonished that the filmmakers went down this route with Superman. I get Superman causing an oil spill and straightening the Tower of Pisa, but a drunk Superman is sort of a depraved, dangerous thought and it’s sort of awesome that this has even been committed to film. Christopher Reeve does an excellent job depicting a moral hero in “good Superman” and a very menacing evil Superman.

The garbage dump fight between Clark Kent and bad Superman is always interesting. It doesn’t make much sense as it’s never clear visually if this is Superman’s internal struggle between good and evil. When Kent finally prevails the music swells and Superman takes to the skies in the film’s second cool sequence, as Superman swoops through canyons and doges missile attacks.  Superman’s fight with a sentient machine and the cyborg woman it creates is cool as well, showing off Superman’s smart side while calling back to an earlier scene, suggesting that the makers of this film might actually know how to make a real movie. But all of this stuff, the “evil” superman gags, the garbage dump fight, Superman’s final battle with the villains, is not enough to save this meandering movie.

Much of the film takes place in Smallville to introduce Lana Lang (Annette O’Toole) and distract from the reality that they couldn’t get Margot Kidder back for any length of time. All of the Smallville reunion stuff is meaningless and grinds the film to a halt. There’s a cheap bad guy in a former jock that likes to bully Kent, but after General Zod from Superman II, this guy is laughable. Even worse are the real villains of the movie, Ross Webster (Robert Vaughn) and “computer genius” Gus Gorman (Richard Prior). Ross wants Superman killed (or something) and hires Prior to build a machine that can kill Superman.

I’ll say this: Richard Prior was and is one of the greatest and most influential comedians of all time with some of the funniest comedy albums and standup acts I’ve ever heard (I even own the short-lived series “The Richard Prior Show” which is totally politically incorrect but often hilarious), but I have yet to see a film that he was in that reflects his humor. Superman III is arguably Prior’s worst film. Nothing he does in this is funny, he ad-libbed nothing, and stifled from spouting his regular blue humor he looks genuinely awkward in this film. When he interacts with Reeve, the two look like they have no clue how to act around one another. It’s really wince-inducing. It’s a shame.

Aside from the John Williams music that is used throughout, the only saving grace, as with the other Superman movies, is Christopher Reeve. Here he has more to do as “evil” Superman as well as Kent and regular Superman and he’s terrific as always. But it’s barely enough to save the underwhelming vision of this film, from villains that are pale imitations of Luthor from parts I and II, to Prior taking up screen time and doing nothing, to Smallville standing in for the more exciting Metropolis, to the “Let’s kill Superman!” hollow story. Superrman III is best watched for the few Superman hero moments and for Superman getting hammered, but it’s probably the dullest of the four Christopher Reeve Superman films.