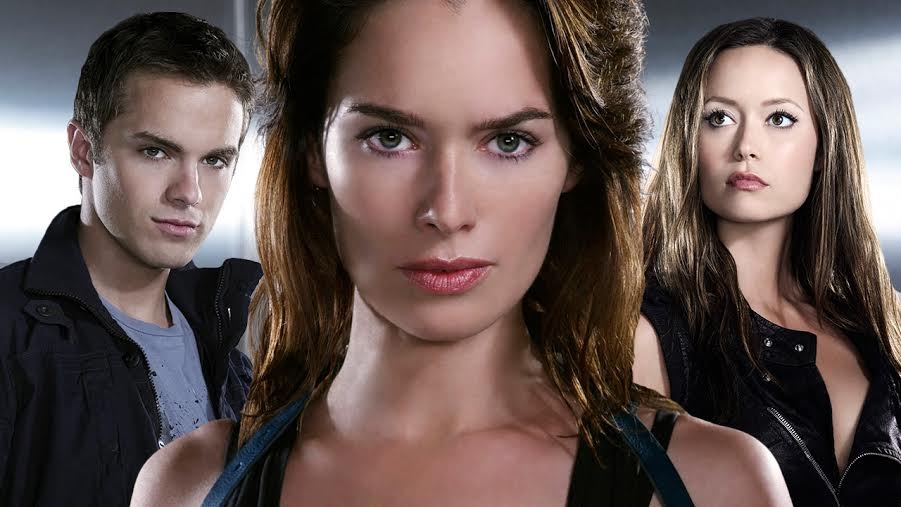 It might be non-canon according to whichever studio currently owns the property, and even James Cameron, but this is the only true follow-up to the original two films as far as anyone else is concerned.

Plot: Set after the events of T2, Sarah Connor (Lena Headey, 300) is tired of fleeing from both killers from the future and law officers in the present day, She resolves to go on the offensive against whatever new technological enemies may travel back in time to murder her teen son, John (Thomas Dekker, From Within), who is destined to become the savior of mankind. Sarah and John find unexpected allies in Cameron (Summer Glau, The Unit), an unknown android model sent by future John to protect him in the past, and FBI agent James Ellison (Richard T. Jones, Event Horizon).

Prompted by the return of terminators into their lives, Sarah and John decide to stop running and focus on preventing the launch of Skynet. They are aided by terminator Cameron, who poses as a student at John’s school, and transports herself and the Connors into the year 2007. With not only the terminators, but also FBI Agent Ellison out to get them, they set out to try stopping Skynet, once and for all.

This season, while on a TV budget, is instantly addicting due to great emphasis on the character’s human spirit in inescapable chaotic life. It helps that the crew-members have previously worked on similar serialized shows like Battlestar Galactica and The X-Files as they have much of the same urgency throughout each episode. Many of the subplots, which include a U.S. military conspiracy and some gangbangers, are complex without being overcomplicated and never feel dragged out.

What makes it even more compelling is how all the actors are clearly comfortable in their roles and the show isn’t afraid to try something different each episode as opposed to take its sweet time building up interest towards the viewers. This all makes for an instantly rewatchable first season.

While the ever-evolving technological enemy grows stronger, 16-year-old John begins taking the steps necessary to embrace his destiny as the savior of mankind while finding himself caught between his fearless protector, the beautiful but potentially dangerous Cameron, and his new love interest, Riley Dawson (Leven Rambin, The Book of Daniel), who represents freedom but also a potential risk to his safety. Uncle Derek Reese (Brian Austin Green, Purgatory Flats), continues to fight alongside the Connors.

After Cromartie (Garret Dillahunt, No Country for Old Men), the T-888 sent from the future, spared Agent Ellison’s life, the FBI agent has become a believer, accepting that “no one is ever safe” and is now bent on understanding his role and his purpose. Catherine Weaver (Garbage lead singer Shirley Manson), CEO of ZeiraCorp, may just know where to find the answers Ellison is looking for. Meanwhile, life for the Connors intensifies as their relationships are challenged and they’re now forced to ponder how long Cameron can protect them before they’re discovered by Skynet.

This season has a few flubs and other slightly irritating characters including: Sarah’s former fiance Charlie Dixon (Dean Winters, Oz). Winters is a welcome presence without a doubt but perhaps this role was dragged out or he just wasn’t the best for this particular role. Overall, there is more good than bad as the writers decided to wrap up this season after realizing they wouldn’t get another year on TV and thanks to social media finally making an impact on TV airings, they were able to correct any of the weaker aspects immediately as opposed to waiting to make changes post-season end.

The show is still just as thrilling and dramatically rewarding, it’s just that the first half is basically leftover stuff from the first season before starting up the new season’s main focus so it can be a bit of an overload at times. Nonetheless, thanks to zero cast and crew changes, it eventually ends up being just as worthwhile a viewing experience.

The show may not have the same creator or budget involved but it’s anything but a shabby mirror or what the franchise once was. In many ways, one wishes the saga could’ve lived on here on the small screen as opposed to endless inferior movie sequels being churned out every six years.