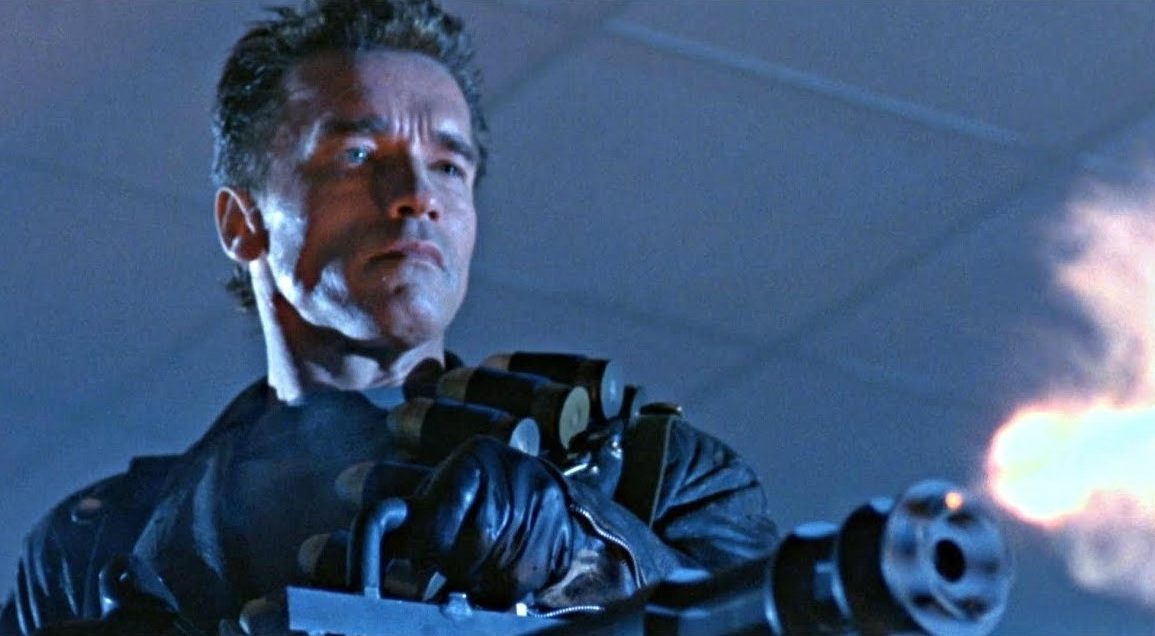 Quick, name your favourite Arnold Schwarzeneggar role.  Is it Dutch from Predator? John Matrix from Commando? Douglas Quaid from Total Recall? Conan? All great characters, but for me, Arnold Schwarzeneggar, always has been and always will be synonymous with the Terminator. No part has suited him better than of an imposing cyborg, stalking the streets of Los Angeles, either trying to kill Sarah Connor – or trying to save her son, John. The legacy of the first Terminator movies is undeniable, but ultimately, the question has to be asked – which one is better? The first one, which is almost like a horror movie? Or the big, spectacular action film that is part II? Grab your shotgun, your sunglasses, and your motorcycle, because we’re about to determine the fate of the first two Terminator films – or are we? Because, as you know, there is no fate, but what we make.

Story: Unquestionably, the concept for the stories for the Terminator movies, especially the first couple, is awesome. A super-smart A.I. from the future sends one of its cyborgs back to the past to kill the mother of the human who leads the resistance against it. Granted, you can poke holes in the story – why didn’t it send the Terminator back to when she was a baby and thus unable to escape or defend herself? You can drive yourself crazy if you start to try to apply real-life logic to a story involving time-travelling and killer robots. Let’s just say that for what it is, there is no better story. Having Kyle Reese sent back to a past he never knew to actually be his own commander’s father is a genius twist that you wouldn’t expect.

Characters: The true strength of the first movie is its characters. Sarah Connor starts out of her depth, and you understand that without Kyle Reese, she would have been dead a hundred times over by the end of the movie. However, when Reese gets injured, Sarah starts to exhibit the leadership qualities that she will grow into, hauling him on his feet and encouraging him to get his ass in gear.  I love Linda Hamilton’s mix of vulnerability and toughness in the role. Michael Biehn is fantastic as Kyle Reese, showing an edge and an underlying loneliness, a boy who has never known a normal life, which leaves him vulnerable to Sarah. Lots of characters have professed love to other characters in films – in this one, Reese’s confession of love to Sarah feels real. Arnold Schwarzenegger was born to play the Terminator – ‘nuff said. Even Paul Winfield and Lance Henrikson are extremely likable in their roles as cops – their deaths at the hands of the Terminator feel jarring, a stronger reaction than you would expect for a pair of bit parts.

Action: I liken the first Terminator film to more of a horror/thriller than a traditional action film. That being said, there are several memorable action set pieces throughout the film. For one thing, it feels that both Sarah and Reese are perpetually chased by the Terminator. Starting out in the nightclub, you get a prolonged chase close to the beginning of the movie that is masterfully choreographed and shot. Then you get the scene in the police station, beginning with Schwarzeneggar’s classic promise, “I’ll be back,” and leading to what can only be described as a massacre. Then there’s the big final scene, which includes a spectacular explosion of a tanker trunk, and a truly “are-you-kidding-me” moment where Reese blows the Terminator in half, only for it to continue to stalk Sarah. All the way through, it seems that the two main good guys rarely have a single moment to catch their breath – and the same is true for the audience.

Story: While the first Terminator was conceptually one of the best pictures ever dreamed up, the sequel somehow manages to outdo the original. The idea to have the same type of Terminator return, but this time be a good guy, is, in a word, brilliant. While again, you could argue that the logic behind the entire thing is a little wonky (why wouldn’t Skynet choose to send a Terminator again before John is born as opposed to when he’s a teenager and thus, a little more capable?), there is an undeniable thrill to see the Terminator team up with a more ready and world-savvy Sarah Connor. Possibly the best move, though, was having the Terminator and John Connor bond throughout the adventure, leading to a shockingly emotional ending that you would never think would take place. It’s a testament to these movies that there’s more to them than just action and carnage (though there’s nothing wrong with that, either).

Characters: The characters in T2 feature some of the best and worst work of the entire franchise.  Arnold Schwarzeneggar feels more like a natural fit as a good guy than a villain, though he was undeniably menacing in the first film. Robert Patrick is a revelation as the T-1000, showcasing a sleek nemesis who somehow seems even more dangerous than the original Terminator. I absolutely believe that Patrick was shortchanged out of a Best Supporting Oscar for his work in this film – how he carries himself, the subtlety in his performance, it goes way beyond the source material. Linda Hamilton has the best transformation, though – it’s hard to believe that she’s the same mousy character from the first film, but the journey her performance tells is completely believable and a testament to her talent. The only hiccup is John Connor himself – he is somewhat unlikeable at the beginning of the film, and his snot-nosed attitude to the two jocks who come to his rescue after he calls for help while throwing a tantrum at the character was nauseating. While the character finally finds himself closer to the end of the film, the amount of time he is annoying is longer than necessary.

Action: I think that T2 has some of the most iconic action scenes in film. Who can forget the scenes in the mall where the Terminator first makes himself known to John, the chase through the dry tunnels in Los Angeles, the fight at Cyberdyne or the finale in the Metalworks? What I was most impressed with, though, is how they made Robert Patrick, who is nowhere near as big as Arnold (then again, who is as big as Arnold), hold his own in fights. Of course, the fact that the T-1000 is liquid metal sure does help a lot. My favourite scene, though, may be the Schwarzeneggar with the railgun blowing up all the police cars in Los Angeles. For someone who was ordered not to kill, I don’t know how no cops were killed after that carnage – not to mention when they blew up the frigging building. Great stuff.

I struggle with this one, as both movies are very different, and they are both iconic in their own right. However, in the end, I have to give it to Terminator 2. Despite John Connor being insufferable at times, the movie literally defines the 1990s for me, and since that was the era I grew up in, it holds a special place in my heart. Plus, I can’t say enough about how awesome Robert Patrick was and the T-1000, just the concept was mind-blowing. The movie revolutionalized visual effects, made the bad guy from the previous film the hero, showed us a new version of tough women who could kick ass, and had one of the most inexplicable memorable and emotional endings I can remember from any movie. You can’t ask for much more than that.