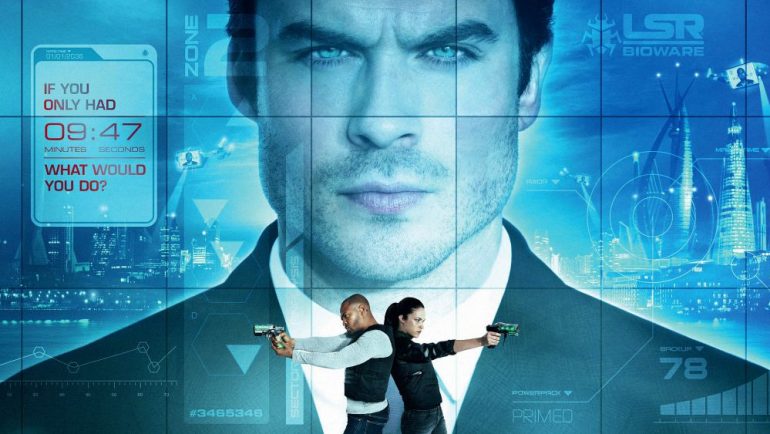 I would say The Anomaly was an admirable attempt to bring such a complex story to the screen, but unfortunately it just misses the mark.

Plot: A former soldier is taken captive and awakens in the back of a van where he learns that he only has a few moments to figure out how he got there.

Review: Actor and director Noel Clarke (Doctor Who, Adulthood) portrays ex-soldier Ryan, who is suffering from PTSD. Through a series of confusing and odd time jumps, we learn that an evil scientist (the completely wasted Brian Cox) and his equally evil son Harkin, played by Ian Somerhalder (Lost, Vampire Diaries), have implanted bio-tech into Ryan and are using it to control him. Due to a glitch with the tech and solar flares, Ryan is constantly switching back and forth between his own personality and that of evil Dr. Langham, but only for nine minutes and forty seven seconds at a time. During these breaks, Ryan tries to save a boy kidnapped for ransom by the Langhams and alert the world to their terrible scheme for world domination.

Having seen the posters and trailer for this film before it’s debut at the Edinburgh Film Festival, I was quite intrigued to see this film. Sadly though, it is a movie that was big on ideas but short on execution.

It looks like they did as much as they could with the smaller budget and for the most part the movie looks just fine. There are some really good fight scenes that utilize some fantastic wing chun but sadly they employ the now dated ‘speed up/slow down’ motion effect, which detracts from the intensity of the action. The DNA activated guns are cool, but it is nothing that we have not seen before.

As far as performances go, Clarke at times seemed very much out of his element. They tried to make him a Jason Bourne style ex-soldier but he just doesn’t carry himself that way. Somerhalder seems to be having a blast as a snarky and campy bad guy, and Brian Cox (apart from a few appearances on a video screen) has nothing to do but stand in a mind mapping chamber. Luke Hemsworth (yes, there is another one, officially making them the Baldwins of Australia) is great as the on the edge cop, given his also limited screen time. One the major surprises is the performance of MMA fighter Michael Bisping as Russian pimp Sergio. He is totally believable and delivers a convincing accent and beatdown to poor Ryan.

It is the missing time and time jumps that just do not make sense. You can see what they were trying to achieve, but by leaving so many gaps, we are forced to guess what happened/is happening and that makes for a very plodding and exhausting exercise.

I would say The Anomaly was an admirable attempt to bring such a complex story to the screen, but unfortunately it just misses the mark.