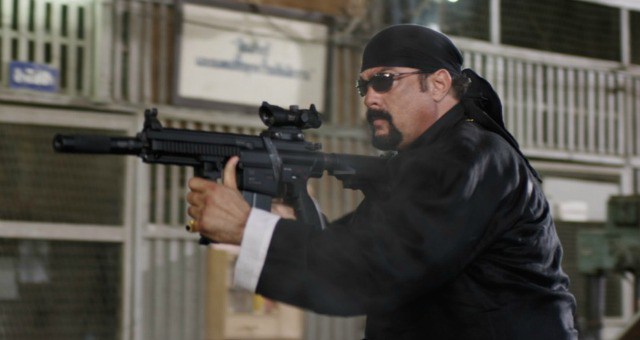 As with most recent Seagal films The Asian Connection has several moments of unintentional humour but if you’re a fan you’ll find something to enjoy.

Plot: Two American expatriates, Jack and Sam, unwittingly steal a drug lord’s money when they rob a series of banks in Southeast Asia and become the target of the gang’s vengeance. When Sam is killed, Jack turns to the love of his life, Pom, and the couple becomes a modern-day Bonnie and Clyde that takes the fight to the gang.

Review: A couple of ex-pats – American Jack (John Edward Lee) and Brit Sam (Byron Gibson) – get bored with working for a living in Thailand and so they cross the border into Burma and rob a bank and are shocked to find that the place is fully loaded with American dollars. They zip away on their motorcycles, cross back into Thailand, and split the money and lay low. Jack has plans to take his girlfriend Avalon (Pim Bubear) away forever with his share of the big score, but what he didn’t count on was that the money belonged to a vicious crime lord named Gan Sirankiri (a heavy looking Steven Seagal) who is obviously not going to stand for someone stealing the cash he was assured would be safe in a Burmese bank. He sends his right hand man Niran (Sahajak Boonthanakit) to trace his marked bills, and within a day he pays a visit to Jack, who boneheadedly put all that money into a bank account. Niran has a plan: He forces Jack and his partner Sam to continue robbing banks of Gan’s money as a penance, and Niran will keep most of his boss’s money for himself, building a sweet nest egg he will use to get out from under Gan’s thumb. But after a handful of robberies, Gan begins suspecting that Niran is double crossing him, and so he corrals his thugs around him to go on the warpath – first to kill Niran, and then to find the two people who robbed him in the first place.

Filmed on location in the Far East on some of the same locations featured in Ninja II: Shadow of a Tear, Daniel Zirilli’s The Asian Connection was surprisingly written by Tom Sizemore, who probably intended to play the part Seagal ended up playing, and the movie is a little better than the film’s title and poster might suggest. Any time I watch a movie with Seagal I’m absolutely watching the movie for one purpose: to watch Seagal and hope that he gives a little extra. He appears on screen a little more here than he did in either Sniper: Special Ops or Code of Honor, and while those other two films were released literally the week before this one played for a week in a few theaters, The Asian Connection is the best of the three. It tells a story I was able to follow and understand without wondering if I was crazy for trying to figure it out, and it’s not what I would personally consider boring. It’s a little stupid because most of the characters in it are complete idiots, and out of the four or five times Seagal appears on screen, one of those has him performing a tai chi kata with a woman, another of them features him in an awkward love/sex scene with the same woman, and yet another scene has him sitting at a table where he’s about to eat a fish, but he’s interrupted by a henchman just as he’s explaining that the fish was a sentient being before being served on his plate. Other scenes with Seagal have him fighting a guy or two, and shooting a big automatic weapon at shadows in a warehouse. If you’ve read this far into this review, then clearly you’re this film’s audience. Also, Michael Jai White appears in a cameo as a gunrunner named Greedy Greg. He gave director Zirilli a day of his time while he was also in Thailand shooting his own film Never Back Down 3.