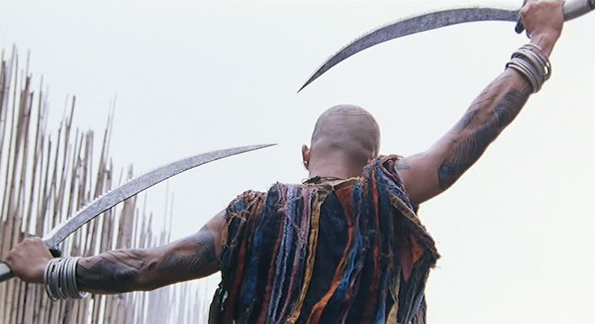 If you’re a purist of ’90s Golden Harvest motion pictures, this will be a priority for you to watch, but otherwise, it’s merely average.

Plot: After the master of the Sharp Manufacturer saber factory abdicates and appoints On, his least popular worker, as his successor, On, unwilling to lead his surly colleagues, embarks on a quest of revenge to kill the evil, flying, tattooed kung fu master who killed his father.

Review: A “re-imagining” of the Shaw Brother’s film One Armed Swordsman, the Golden Harvest actioner The Blade concerns a young man named Ding On (Wenzhuo Zhao), who is chosen by his master to be his successor at the sword factory. On, who was saved by his master as a small child after On’s parent’s were killed by a tattooed warlord in a battle, doesn’t want the responsibility his master has placed on him, and so he leaves the village and everyone he knows behind to embark on a quest to discover his roots. When he encounters a horde of bandits who are led by the very warlord who killed his parents, he engages, but in the fight he loses most of one of his arms. Resolved to get double revenge, he must first figure out how to adapt to his disability and develop a cutting edge style of martial arts so that he can defeat his foes later. He aligns himself with another orphan – a young woman – who is on a similar quest as his, and in the interim of his recuperating phase, his master and the sword factory are overrun with villains who declare war on them. On must come to their rescue, muster his courage, and show the tattooed warlord who’s boss.

From director Tsui Hark a few years before he made Double Team and Knock Off with Jean-Claude Van Damme, The Blade is a heavy (one) handed kung fu movie that’s never fun or exhilarating, but it certainly has Hark’s signature style. Smoky, bloody, and dramatically haphazard, it tries hard to entertain, but Hark’s sensibilities (swishing camera moves, cheated angles as characters fly around trying to impale each other with swords, etc.) are so overpowering that the movie is never quite cohesive. If you’re a purist of ’90s Golden Harvest motion pictures, this will be a priority for you to watch, but otherwise, it’s merely average.

Warner Archives is in the middle of releasing a slew of Golden Harvest movies on their Warner Archives label, and I’ve enjoyed discovering movies like Pedicab Driver, A Terra Cotta Warrior, Big Bullet, and Blade of Fury, but I think The Blade is my least favorite (so far) of the bunch. That said, the film is nicely presented in widescreen with an optional dubbed English language track as well as English subtitles.