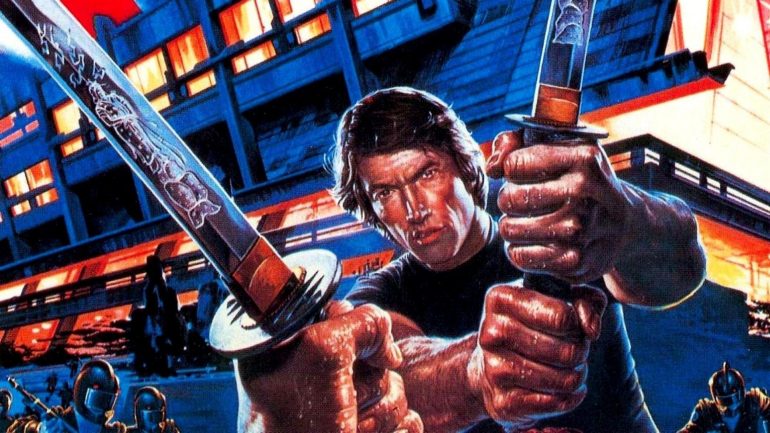 This movie is as strong as they come, with brutal fights, bloody sword duels, beheadings, head-splitting action, and martial arts galore. It had me howling in my seat, stomping my fists, and laughing out loud. It’s great beyond compare. You know when you watch a movie and when it’s over you want to watch it all over again? That’s The Challenge. It’s that good. It was emulated in 1995 in the Christopher Lambert film The Hunted (which was pretty great), but this movie is just … sublime.

Review: There have been just a handful of movies I’ve always wanted to see but had to wait most of my life to get to that moment when circumstances iron out and I’m finally able to watch one of my holy grails. John Frankenheimer’s The Challenge is one of those few movies. Finally, at long last, Kono Lorber has released it onto home video – and on beautiful Blu-ray, no less – and I’ve got to tell you, readers: It was worth the wait … and then some.

The movie has a great set-up and story: Palooka boxer Rick Murphy (a dynamic and pitch perfect Scott Glenn) is approached by a Japanese man in a wheelchair and his sister to do a job that he can hardly afford to turn down. They watched him box at a local gym and they think he’s the right man for a dangerous task: To hand deliver a priceless samurai sword to a location in Japan. It pays 500 bucks a day, so yeah, he says they’ve got a deal. Within 24 hours he’s landed in Japan, carrying a bag of golf clubs (with the sword concealed as a nine iron), but as soon as he lands, he and the wheelchair-bound man he flew in with are snatched by some thugs and an English-speaking enforcer named Ando (Calvin Jung from Lethal Weapon 4), and the first thing they demand of them is the sword.

They realize almost immediately that the sword Rick is carrying is a fake, and they throw the guy in the wheelchair out of the car, sending him to his death. When they bring Rick to their boss – an impossibly rich businessman named Hideo (Atsu Nakamura) who lives in a compound the likes of which only villains in 007 movies live in – Rick is clued into the big picture: The sword he was hired to bring into the country is one of “The Equals” – twin priceless swords two brothers have been fighting to obtain for over 30 years. Hideo is willing to pay millions for it, and he’s also willing to kill anyone to steal it, so Rick is obviously in way over his head.

In a split second dash, he escapes captivity, but is wounded, and next thing he knows he’s safe in Hideo’s brother Toru’s (Toshiro Mifune) martial arts studio some distance away. He comes to realize that Toru is the honorable of the two brothers, and that Toru’s crippled son who was murdered was carrying the sword all along hidden in his wheelchair. Toru’s daughter Akiko (Donna Kei Benz) explains the whole story and how the two brothers went to war against each other and how the two swords became separated even though they were meant for Toru all along. After contemplating betraying Toru and stealing the sword for cash, Rick makes good and humbles himself before the man he will consider his master, and he becomes Toru’s most valuable student. With a crash course in martial arts, sword fighting, and honor, Rick saves Toru’s life after Hideo sends some goons to kill him, and both Rick and Toru take the offensive and lay siege to Hideo’s heavily fortified compound and go to war to unite The Equals.

Gotta tell you, man: The Challenge should have been made available on disc years ago. Since being released on VHS in the early 1980’s it quickly went out of print and was never repressed, so Kino’s brand new release will usher this film in to generations of movie lovers (and action aficionados) who’ve never been able to see it. My only association of it has been Jerry Goldsmith’s interesting and rich score, which has been released on CD a few times over the years. As is, The Challenge is a zap in the nuts to the watered down action films that have come and gone over the last few decades. This movie is as strong as they come, with brutal fights, bloody sword duels, beheadings, head-splitting action, and martial arts galore. It had me howling in my seat, stomping my fists, and laughing out loud. It’s great beyond compare. You know when you watch a movie and when it’s over you want to watch it all over again? That’s The Challenge. It’s that good. It was emulated in 1995 in the Christopher Lambert film The Hunted (which was pretty great), but this movie is just … sublime.

The Kino release is presented in filmic splendor (1:85:1), with plenty of grain and exceptional sound quality. No trailers or special features, though.