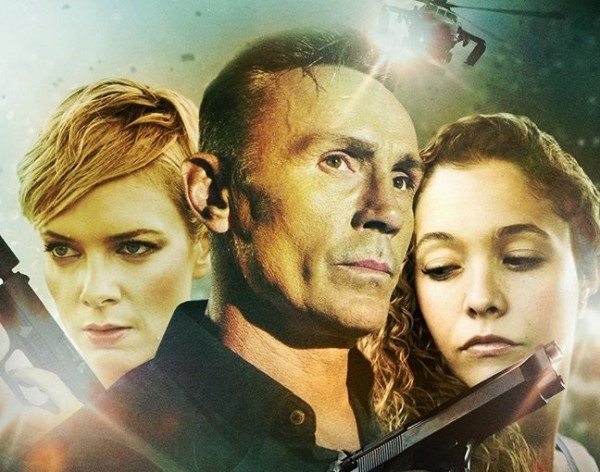 The Chemist is a little disappointing considering the talent involved.

Plot: An aging assassin is double-crossed by his employer and finds revenge with his unique killing talents

Review: A hitman takes on an upstart apprentice who is destined to receive the contract to snub out his mentor. We’ve seen it before in films like both versions of The Mechanic, and yet somehow we always see it again in new films because it’s a fallback idea for action movies. It’s just one of those things that works. In Art Camacho’s The Chemist (not as good a title as The Mechanic, but whatever), French kickboxing champion and former Special Forces soldier (for real) Olivier Gruner from Savate, Angel Town, Savage, and most recently Sector 4, plays a depressed assassin named Ronus Steele who takes on an apprentice because he seems to understand that he’s on his way out of the profession and deep down he wants to settle and have a family, and so he frequents a bar where he has his eye on a cute young woman attending a nearby college.

By day Ronus trains Blaine (Steven Dell), a total tool of a man who thinks that killing people for money is cool, and who’s hot-for-killing girlfriend Trinidad (Nina Bergman, sexy as hell) wants to go along with Blaine and Ronus to observe them killing their marks. By night, Ronus drinks alone until he works up the nerve to talk to Gabriela (Stephanie Gerard who almost sinks the movie with her inexperience as an actor), but then both Ronus and Blaine get a contract to kill Gabriela, who is somehow tied to an earlier contract that Ronus completed. Since he’s become slightly attached to the girl, he tries to work his way around killing her, but with Blaine and Trinidad eager to close the contract, Ronus has to juggle more than just his feelings this time around. His boss Claxton (Patrick Kilpatrick) doesn’t have the patience to let Ronus make up his mind to do his job or not, and so he gives Blaine the contract to kill Ronus. Will the mentor outwit and outmuscle the apprentice, and by some miracle save the woman he’s developed feelings for? Things don’t always turn out happily-ever-after, especially for a hitman with a guilty conscience.

Oliver Gruner has always been one of the underrated martial arts action stars. His first three films (Angel Heart, Nemesis, and Savate) were his best films, and he quickly fell into an undesirable groove of starring in mostly crummy (I’ve seen them all, believe me) direct-to-video films that didn’t deserve his talents. His acting and thick accent haven’t really “improved,” over the years, but you could say that about any of his peers who’ve crossed over from the world of martial arts and sports from other countries. Their rough acting and accents are just part of who they are. What you see and hear is what you get with these guys. Their talents lie in being themselves, by being interesting athletes and performers of their designated martial arts. Gruner is part of a dying breed of real-thing action stars, and he’s actually become more interesting as he’s gotten older because you can see how hard he’s trying to stay strong and relevant in his respective genre. He has no other genre to turn to like Stallone or Schwarzenegger have.

If you want to compare him to anybody, compare him to Jean-Claude Van Damme, but while Van Damme achieved “A” status for nearly a decade, Gruner was never quite able to get to that level. It’s admirable to see him still going for it, and he’s the best thing about The Chemist, which, on the whole, is needlessly confusing and badly directed. Apologies to Mr. Camacho, who has done some solid work over the years (The Power Within and Recoil are his best movies), but The Chemist has the markings of a director who has never made a movie before. There are incredibly irritating visual flairs all throughout (some people call this technique “avid farting”), and there were whole stretches of the film where I didn’t know what was going on or why. Another detriment is co-star Stephanie Gerard, who is not only miscast, but given too much to do. Someone this inexperienced and awkward on camera should never be given more than a few lines of dialogue at a time, but she was cast in the leading lady role, which was a huge mistake. On the other hand, Nina Bergman as the vixen / villain absolutely shines in her underwritten role.

This is someone who will have a long and interesting career if she’s careful about whom she works with from here on out. For anyone unfamiliar with her, check out the Wonder Woman short film she starred in for director Jesse V. Johnson. Rounding out the cast are dependable action guys like Kilpatrick and Martin Kove, who both do what they can do with throwaway roles. Also, mysteriously in the cast are a gaunt looking Richard Grieco and Sasha Mitchell (the star of Kickboxer 2-4), who both must have done Camacho a favor by showing up for wordless, thankless roles as two sinister looking guys sitting around a poker table. We see flashes of them playing a game, but are never quite able to understand why it matters that we see them, as they serve little purpose to the plot.

If there’re a few reasons to see something like The Chemist, then that should be enough. You’ve got Gruner, Bergman, and some action (most of which is obscured by dark shaky cam photography), and you’ve got a CGI-exploding helicopter at the end. I remember talking to a well-known director of some beloved action films from the 1980s, and he told me that when it came to the point in his career where the budgets had shrank so much that he couldn’t afford to blow up real cars anymore, that’s when he knew his career was over. And yet, Art Camacho and others in his peer class have pressed on, budgets be damned, and have found ways to blow up a helicopter using cheap computer generated effects. That’s where we’re at with these types of films, and you know what? It’s almost always worth it.