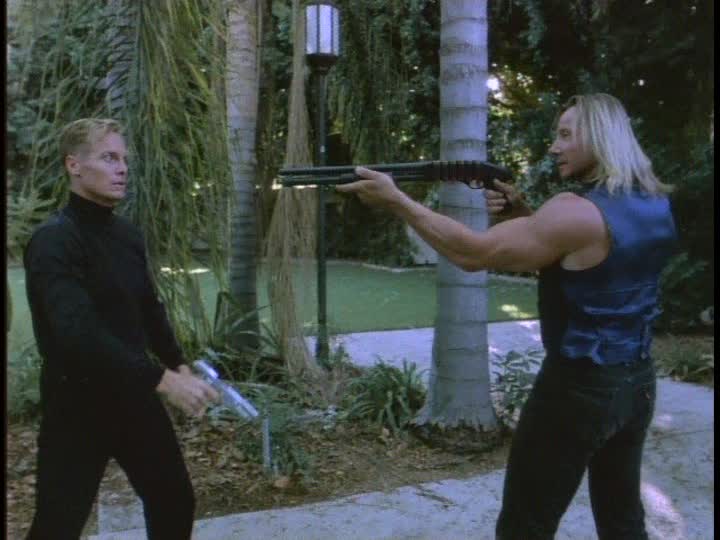 Overall ,the movie is something for the Matthias Hues fans among us or B Movie addicts who watch everything.

Plot: Ernest Gray is a bookstore owner who lives peacefully with his daughter. When a crew of mercenaries attacks, his real identity of an ex-CIA agent is blown. Control 5, who betrayed him ten years ago, is on his trail again.

Review: I bought the DVD for exactly one Euro and to be honest only because I like Matthias Hues and it seemed to have a nice cast with Robert Vaughn, Don Stroud and 90’s B to C Movie regulars Frank Zagarino and Bryan Genesse. Zagarino plays Ernest Grey the best CIA Agent of all Time who had the Codename: Napoleon. In the past he fought against a terrorist cell by the name: The Cell (very imaginative). The leader of the Cell is Matthias Hues. Ten Years later the cell works for Control 5 (the movie has it with names) a.k.a Robert Vaughn, the man who seemingly pulls all the strings. Zagarino best known for his Shadowchaser movies (there he played a cyborg) lacks the charisma and is not really likeable in his role. He mostly shouts at his little daughter (the relationship feels utterly unbelievable). Bryan Genesse has a minor role but is really charismatic and interesting. Robert Vaughn, the old legend, mostly sleepwalks through the movie. Hues is impressive and cool as always but sadly didn’t have much to do except flexing his muscles and shooting a pumpgun.

Speaking of shooting. The movie tries to copy the style of John Woo but what the hell, except of Bryan Genesse nobody can shoot in this damn movie. 5 feet away and the best CIA Agent and a bunch of mercenaries can’t hit each other. Stevie Wonder would get more points in a shooting contest. On the contrary, Art Camacho can choreograph some nice fights. There are two nice, but rather short fights between Hues and Zagarino. The movie contains the expected, but totally needless and emotionless sex scene.

The ambushes in the movie are not really smart. The try to kill him in the book store…and he can see them and their guns through the front window 20 feet away? In the coffee shop they act even more amateurish. And the last one, why I would attack somebody with motorcycles in a factory hall? The budget was really low on that one, you recognize that on the cheap sets, bad sound editing and a really bad music score.

The movie is not so bad in a funny way like e.g. the Unisol Television Movies but there are some unintentional funny moments: Dead people resurrect! A goon who dies of a headshot is clearly visible some scenes later. Frank Zagarino puts his girl in a safe place…a car, in the middle of a shootout. A camera operator is clearly visible in one scene. Control 5 says once in the movie: “We need him alive”, of course that is why they are try to kill him all the time. Geography is not a strength of the movie. First the cell was released from an east German prison, than afterwards it was a west German prison. But what the heck, around 1998 there was only one Germany. Overall ,the movie is something for the Matthias Hues fans among us or B Movie addicts who watch everything.