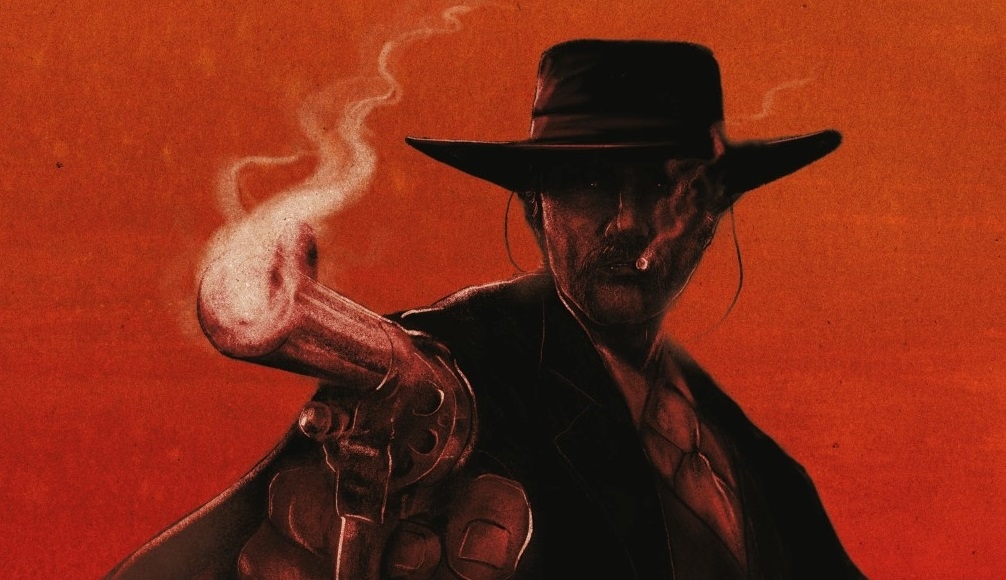 All five entries in the Sartana saga are on par with each other, and I can’t choose a favorite or a least favorite, and fans of spaghetti westerns will have a blast with all five films included in Arrow’s collector’s set.

Plot: Crooked bankers plan an insurance swindle and hire a Mexican gang to steal the bank’s gold but they also pay Lasky’s gang to kill the Mexicans.

Review: A handsome stranger named Sartana (Gianni Garko) rides into a small town and finds it full of vipers. The town is corrupt and there doesn’t seem to be an honest man around. When Sartana takes a good look around, he sees a possible opportunity: He might be able to get rich if he can work around the bad guys who are trying to swindle a stash of gold dust from each other. The gold – hidden in a coffin – has several suitors hoping to claim it all. There’s the crooked fat banker, whose wife is sleeping with a hired killer named Lasky (William Berger), and there’s a cold-blooded killer (played by Klaus Kinski), and so many others, including a pretty whore, and it seems like anyone else who has become aware that there’s a fortune somewhere around town. Sartana gives himself just enough leeway to get close enough to the scum who might know where the treasure is, but he keeps himself just far enough away to get off a few shots with his four-barreled handgun.

The introduction to a five-part spaghetti western series that brought Sartana to the fold, If You Meet Sartana…Pray For Death is a pretty nifty first entry. Sartana is more or less the same guy The Man With No Name Played, but he’s a little more articulate and better dressed, and he has great luck with cards. The movie has plenty of action, but it’s light on pizzazz and the score isn’t very memorable. Directed by Gianfranco Parolini, this picture is a more than satisfactory foray into a fun genre with plenty of gems waiting to be discovered.

The 2K restoration of If You Meet Sartana…Pray For Death is nice, and the disc includes a new audio commentary, plus a video essay, as well as promotional images and more.

Plot: Sartana is falsely accused of robbing a bank, and must find the real robbers and clear his name.

Review: A daring and bloody bank robbery goes down, and a man posing as the evidently famous gambling gunslinger Sartana (played for the second time by Gianni Garko) seems to be trying to frame Sartana for the heist. A printing press prints stacks of wanted bounty posters offering 10 grand for Sartana’s head, and bounty hunters from all over get Sartana’s scent and go after him. Sartana has his hands full dealing with scum and villainy as they close in on him, but he’s gotta be either one of the luckiest gunslingers around or fortune favors him because no one can lay a finger on him. When he finally gets close enough to find out who framed him, it turns out the culprit is someone who’s been relatively close to his proximity for some time.

The second Sartana film feels a little punchier than the first entry, but it’s pretty much on par, and they’d make a good double bill with each other. Sartana, by this point, was much more untouchable than most other spaghetti western heroes like The Man With No Name or Django, both of which had been beaten up or brutalized at various stages of their adventures. Sartana doesn’t so much as get his black cloak dirty. If you can get on board with him being a hero five steps ahead of his enemies, then you’ll be fine. Klaus Kinski, who was in the first film as a different character, appears as a dapper bounty hunter who can’t best Sartana at cards. Director Giuliano Carnimeo doesn’t really infuse the film with a ton of style, but instead grounds the film and loads it with action.

The transfer for I Am Sartana, Your Angel of Death is nice and warm in a 2K transfer, with newly translated English subtitles if you prefer it in Italian, as well as a new audio commentary by western experts C. Courtney Joyner and Henry Parke, plus new interviews, and promotional images.

Plot: Sartana, bounty hunter and gunfighter, witnesses the robbery of a shipment of gold. He finds his way into town where he meets with a lot of suspicious stares from the locals.

Review: Quick draw gambler and bounty hunter Sartana (George Hilton, replacing Gianni Garko) finds himself liberating a tiny little town full of bad guys, and as a result incurs the wrath of a bandido leader. There’s gold somewhere and Sartana always has his sniffer turned towards it, but he has heavy competition in the form of a blonde, educated bounty killer named Sabata (Charles Southwood), who just might be Sartana’s equal, but just on the opposite spectrum of ethics and skill. Who are we kidding here? Sartana is ten steps ahead of everyone all the time, and with his little four barreled handgun, he’s clearly the front-runner for victory.

A far more buoyant and whimsical outing for Sartana, Sartana’s Here … Trade Your Pistol For a Coffin is a borderline spoof of the genre, giving the lead character a massive head start on every situation where he plans way ahead, never misses a shot, and might as well be considered a bulletproof action hero with the way he carries himself. Hilton only played him once, but I liked his take on it, and the wacky, totally outlandish finale had me scratching my head a little in confusion, but it was still a fun spaghetti western. The score by Francesco De Masi is the best score from the first three films, and director Giuliano Carnimeo (who later did Exterminators of the Year 3000) seems to have a grand time with the material.

Arrow’s release of this title comes in a brand new 2K restoration, a new interview with Hilton, plus a bonus interviews with several other actors from the film, promotional images, and more.

Plot: After witnessing a brutal massacre, the legendary hero Sartana is ready to do some investigating. Almost everyone in the tiny town of Indian Creek seems eager to buy up the property left behind by the murder victims, and one of them could well be behind the killings. The sheriff himself is not above suspicion, so Sartana must uncover the culprit all on his own.

Review: Much more somber and mature (and more blonde than he’s ever been), Sartana (played for the third time by Gianni Garko) sets the tone for his next adventure with more of a scowl than a smirk this time around. He finds himself in a booming town with a popular casino run by a Chinese kingpin, and in his pocket is a deed for a piece of land that is supposedly full of gold mines. Right away as soon as the sheriff and the casino owner find out about the deed, they’re all eager to claim it, but first they have to persuade the rightful owner of the deed, the pretty daughter of the man who’s deed it actually belonged to. Sartana takes her side and protects her from the swindlers, but as he sets them all up one by one, he keeps the undertaker busy with making coffins, which he’s only too eager to pay for as a last laugh to anyone who would try to challenge him. Turns out the land is worthless, but no one but Sartana knows that, and so he has a little fun heating up a bidding war for a piece of paper.

Far more serious in mood than the previous three entries, Have a Good Funeral, My Friend … Sartana Will Pay strips Sartana of his debonair, devil-may-care qualities and turns him into a straight shooter mostly disinterested in gambling (the one gambling scene in the film has him losing on purpose), and his weaponry is different this time around. He uses his little four-barreled handgun only once and virtually as an afterthought, and Garko’s portrayal of the character seems to come from an entirely different approach, so this might as well be a different character entirely. I still enjoyed it, though, and it definitely felt like a mature step forwards for the franchise. Directed by Giuliano Carnimeo.

Arrow’s Blu-ray contains a new 2K restoration, newly translated English subtitles, a new audio commentary by C. Courtney Joyner and Henry Parke who know the genre better than anyone else, a new interview with one of the co-stars, promotional material, and more.

Review: In his last ride, Sartana (played for the fourth and final time by Gianni Garko) rescues an acquaintance from a maximum-security prison because he knows where half a million dollars in gold is hidden. Sartana, looking more ruddy and unkempt than usual, makes a deal with his friend to split the money in exchange for his freedom, and they split up and agree to meet later. When Sartana does some investigating into his friend’s past deeds, he finds out that the guy is most likely as guilty as sin, and figures he’s going to get backstabbed later if he doesn’t prepare for a reckoning. When others – including a Spanish General – get wind of the stash of gold, there’s a massive battalion after Sartana’s hide … but Sartana is ready for all comers with his retrofitted pipe organ artillery cannon that he places in the middle of the town that levels the playing field like an equalizer!

All the familiar trappings of a Sartana movie are here: his nice outfit, his tiny four-barreled handgun, a couple of fun gambling scenes where he always wins, a search for gold, gadgets, and even a crotchety old sidekick who helps him out. All five entries in the Sartana saga are on par with each other, and I can’t choose a favorite or a least favorite, and fans of spaghetti westerns will have a blast with all five films included in Arrow’s collector’s set. Light the Fuse … Sartana is Coming is a solid final chapter, and Garko played him best. Bruno Nicolai did the score, and Giuliano Carnimeo directed it.

Arrow’s 2K restoration looks really nice, and there are some bonus features on the disc, including two new interviews, some archival interviews, promotional images, and more. 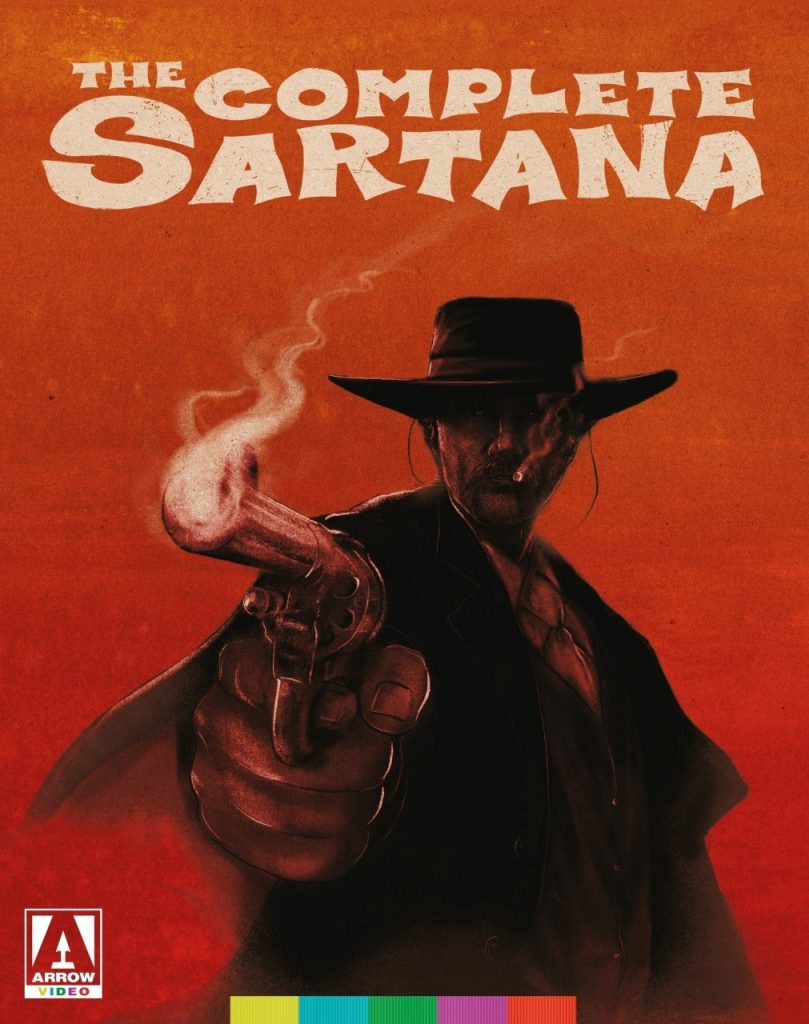