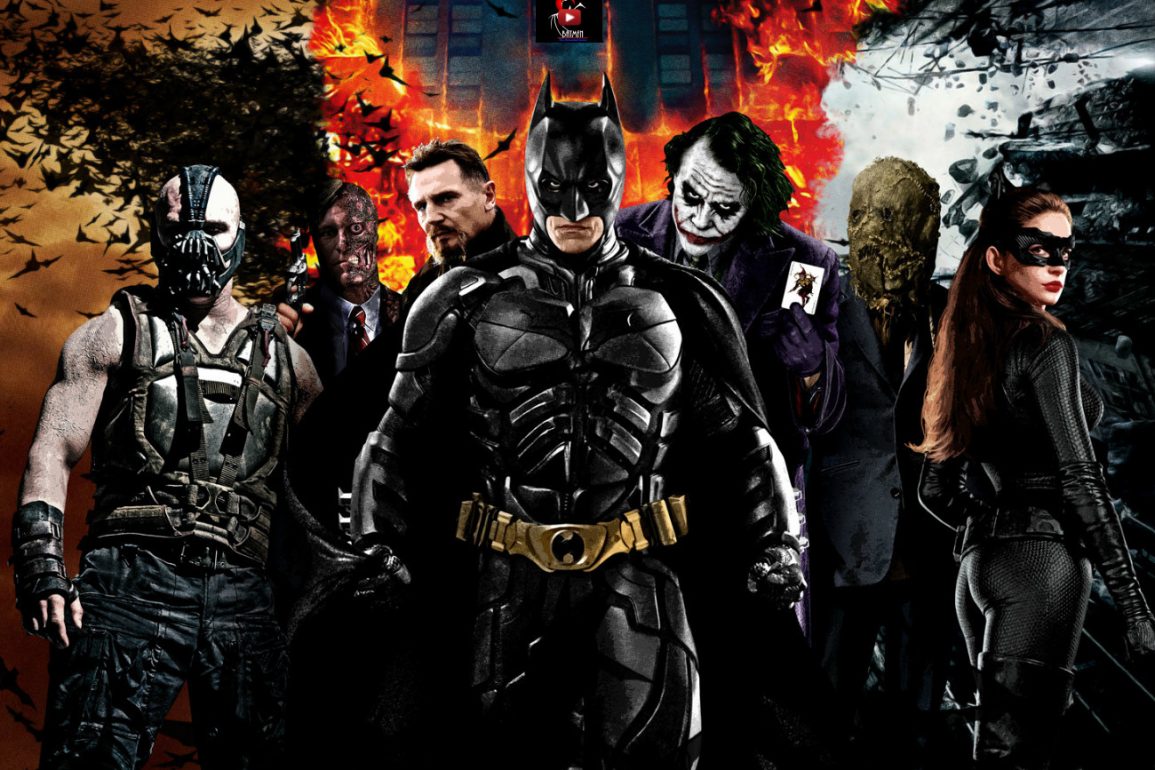 Is This the Best Trilogy Ever?

When Batman Begins was released in 2005, there were no big expectations.  Audiences still had the awful noise of Batman and Robin ringing in their ears.  This migraine of colour and decibels had brought the curtain down on the caped crusader.

Then Christopher and Jonathan Nolan began a collaboration with David Goyer, with a view to turning the focus on the character of Bruce Wayne.  From Christopher Nolan’s perspective, the psychological study of an orphaned child growing up into an embittered billionaire was far more interesting than a guy in a rubber suit kicking crap out of bad guys.  Not that there is a damn thing wrong with broken bones and mayhem.  That is why I pay to see these movies.

It was clear from the beginning that this would be an entirely new take on the genre.  Christian Bale brought bruised vulnerability to the role.  His Wayne was haunted, very angry and Nolan wanted to explore the reasoning behind his decision to dress up in a rubber bat suit.  Most shrinks would have a field day with that.  I believe Nolan would make a fantastic psychiatrist if the film making career didn’t work out for him.  (How likely do you think that is, kids?).

Veteran British Isles actors Michael Caine, Gary Oldman and Liam Neeson coated the film with integrity and an immersive seriousness.  I loved the sequences of Ducard (Neeson) training Wayne to be inducted into the League of Shadows.  In a famous scene, Wayne falls through the ice, and Ducard tells him as he shivers with cold and shock when he attempts to recover, to hold his chest.  He sagely advises that the rest of his body will take care of itself.  Christopher Nolan later said that this was total bollocks (I’m paraphrasing here), and it is not medically accurate.  But the scene is so well written and directed that you believe it totally.

This is what I love about Nolan’s movies.  They have such intellectual depth.   But they kick so much ass as well.  The sequences near the end of Begins where the Scarecrow, played by the always magnificent Cillian Murphy, is unleashing hallucinogenic panic on Gotham, overseen by the malevolent Ra’s Al Ghul, are compelling and creepy.

The Dark Knight tore up the rulebook completely.  What a brilliant movie.  From the moment the Joker leaps into view – “I believe that whatever doesn’t kill you simply makes you….stranger…” the audience is electrified. The late and sorely lamented Heath Ledger owned that movie from start to finish.  His take on the role was as theatrical as you would expect, but he just emanated calculated craziness.  A perspiring, nervy freakshow that you would never want to come into contact with.  Not ever.  Ledger’s Joker was terrifying and riveting.

Nolan said about his immediate follow up to The Dark Knight, that “Inception is a project which demands a large-scale approach.”  Nobody would ever contest that Nolan does large-scale extremely well.  Just watch Paris fold in on itself in that movie, and you’ll see what I mean.  But he totally knocks it out of the park in The Dark Knight Rises.

This one completely blew me away.

I was very apprehensive coming in to this movie for the first time, as I did not know how Nolan could better The Dark Knight, which was a tour de force.   But the sheer scale of this picture is awe inspiring.  The second film’s morose monochrome captivated me, but it was the colour and varied tone of the third one that I was not expecting.    In swaggers Bane, all bullying physicality.  What a contrast to the psychological torture inflicted by the Joker.   Here was a villain who just wanted to square up to you and punch you in the face.

Tom Hardy said in an interview on the blu-ray that he was channeling Richard Burton’s theatricality, along with a Romanian fighter.  The result is a hulking warlord who sounds like a combination of Auric Goldfinger and Winston Churchill.  I loved Hardy’s performance.  It was fearless and innovative.

Anne Hathaway also proved why she is front and centre in Hollywood at the moment.  Her slinky, sly turn as Selina Kyle/Catwoman bowled me over.  A purrfect (yeahh, I said it!) match for Mister Wayne.

When you combine visual ambition with unmatched storytelling, it is an unbeatable combination. Christopher Nolan is our generation’s David Lean, in my opinion.  I  don’t know what he will do next, but I know it will be amazing.

The original Star Wars and Lord of the Rings trilogies are genre masterpieces.   But The Dark Knight trilogy belongs right there with them.   Sombre, spectacular, masterful film-making from a genius director.