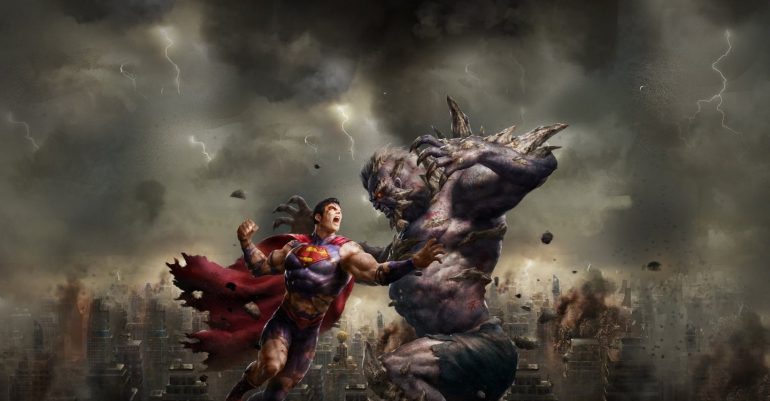 The Death of Superman seems somewhat pointless considering we’ve already had Superman: Doomsday but there is at least plenty of action.

Review: 11 years ago saw the release of the very first Warner Brothers DC Universe Animated Movie Superman: Doomsday, which chronicled the popular storyline in the comics where Superman battles an unstoppable creature named Doomsday on Earth. The battle was epic. We know that Superman was killed at the end of the battle (so was Doomsday, by the way), but the story that got us to that point is what was interesting. Now, with the remake / rebooted version that tells the same story, but in a cost-cutting and action-minded way, The Death of Superman retells the same story, but for the life of me I can’t figure out why. When the live action smash hit Wonder Woman was released a few years ago, Warner Brothers simply re-issued their DC Universe animated film Wonder Woman instead of producing an entirely new version of the same story that movie told. The new addition this time is including the entire Justice League in the plot, but the movie doesn’t need them, as they prove to hold little weight against Doomsday when he arrives. There is an arc where Superman (voiced by Jerry O’Connell) struggles to maintain his relationship with Lois Lane (voiced by Rebecca Romijn), and he looks to the league for examples on how to make relationships work. With The Flash about to get married, Superman broods and questions his own heart and where he stands with Lois. But when Doomsday arrives, the League is quickly incapacitated, leaving Superman the last to confront the creature, and the battle is on.

The Death of Superman works on a nominal level for fans of the DC Universe Animated Movies, but if you’ve seen Superman: Doomsday, then it’s easy to discern which is the better entry. I’ve been waiting for more Superman DC Universe movies, but I’ve had to share him with the Justice League lately. Batman hogs the limelight, and it seems any time Superman has a chance to shine, the plot requires him to get killed in a spectacularly violent way in order to make his character seem edgy. Superman doesn’t need to be edgy. Just let him be SUPER. From directors Sam Liu and Jake Castorena.

The Blu-ray comes with the special features Death of Superman: The Brawl That Topped Them All, and some bonus cartoons.