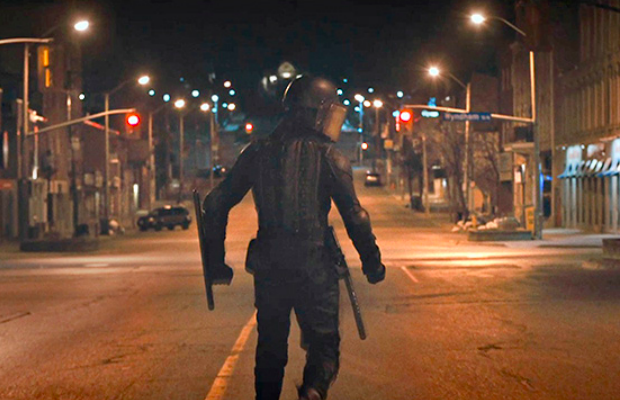 The Demolisher is close to being great. If the film had let its feet touch the ground a little bit instead of being so inwardly visceral and flighty, the movie might have had the chance to run hard instead of slowly drifting off and away into an untouchable place.

Synopsis: Bruce (Ry Barrett) is an ordinary repairman tormented by a crippling sense of responsibility for his disabled wife Samantha, an ex-policewoman (Tianna Nori), the survivor of a gang-related assault. Bruce’s increasing hyper-sensitivity to the injustice suffered by his wife steer him down a dark path of vigilantism, and with his rapidly disintegrating mental health, paranoia and overwhelming sense of doom, Bruce channels his inner rage towards a young woman, Marie (Jessica Vano) and finds refuge in a world of extreme violence.

Review: Vigilantism is one of the most reliable subgenres in action cinema to tell a story, and The Demolisher follows the bloodied path of greats like Death Wish, The Exterminator, and Death Sentence. Using an almost wordless approach, the film presents us with an emotionally unstable and broken man named Bruce (Ry Barrett), who is reeling from the reality that his wife (Tianna Nori) is permanently disabled after her work as a beat cop left her severely wounded. Bruce suits up night after night in tactical riot gear and prowls the streets looking for the gang members that hurt his wife, and almost every night yields him an offering of a gang member that he beats to a pulp. Many nights, though, he is interrupted by a timer indicating that he needs to go home and administer a pain reliever dosage to his wife, who can’t take care of herself. Those are the worst nights because he can’t fulfill his bloodlust and vent his rage upon the scum who made him the way he’s become. As the nights turn into weeks and months, Bruce becomes delusional and irrational, and soon becomes obsessed with another woman whom he thinks is following him and has somehow stolen something that belongs to him, and as he targets her for his next bludgeoning, he spirals out of control as she’s saved by the same gang that attacked his wife. Bruce’s uncontrollable rage coalesces into an apocalyptic showdown between the woman, the gang, and his own inner psyche, which proves to be his own worst enemy.

At times, The Demolisher is close to being great. If the film had let its feet touch the ground a little bit instead of being so inwardly visceral (including nightmarish dream sequences) and flighty, the movie might have had the chance to run hard instead of slowly drifting off and away into an untouchable place. It wants to be the next big cult thing, and I can see that it might have been something people would talk about for years to come, but the writing is simply not there. It pushes for deep and dark, and its cast does everything within their means to deliver what filmmaker Gabriel Carrer expected of them, but he still needs to hone his skills as a cinematic author in order to follow through with his intentions. The Demolisher is an art house Death Wish in the sense that The Exterminator is the exploitation riff of Death Wish. For that, it’s a success, but it’s not nearly as carry-through satisfying as it should be. If they make a sequel, I’d be excited to see what Carrer does with it. He’s almost there.