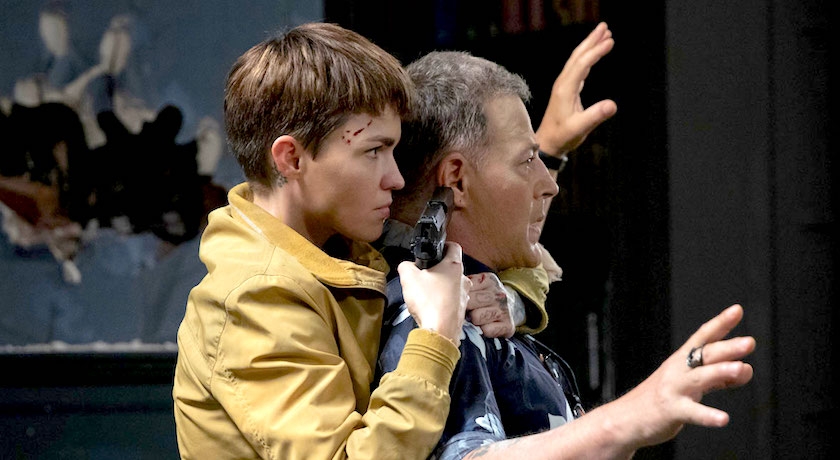 The Doorman has very little to recommend it unless you are a die hard fan of Jean Reno. Ruby Rose never convinces in her role and the action is flat and forgettable.

Plot: A woman returns from combat and befriends a family in NYC. A gang of thieves plot to take the family’s valuables, and she is all that stands between them and their lives.

Review: When I watched the trailer for The Doorman it made me curious to watch it especially with it having Jean Reno as the villain who I’ll watch in anything that’s he’s in.

I really wanted to like this one, I really did but unfortunately The Doorman was a very boring film that is filled with predictable twists that you can see a mile away.

Ruby Rose was miscast as our lead; I thought she was very bland and wooden and during any of the action scenes we don’t see her face enough so she was never convincing as a badass.

Jean Reno tries his best but is given nothing to work with for his character; the kids are annoying and Louis Mandylor (who I didn’t realize was in this) is also wasted in a nothing role.

The action is incredibly poorly edited, especially during the fight scenes, which was the same problem I had with Ava, but this was even worse than that.

The direction is flat and lifeless and there was nothing that stood out about it; there weren’t even any memorable lines.

The only positives I can give this are Aksel Hennie is actually decent as one of the villains, and the cinematography is good, but that’s it.

Overall, The Doorman is a very boring action film that has an uninteresting lead, poorly shot action, a dull story, and wastes an actor like Jean Reno who could’ve been an interesting villain, but unfortunately that wasn’t the case here.