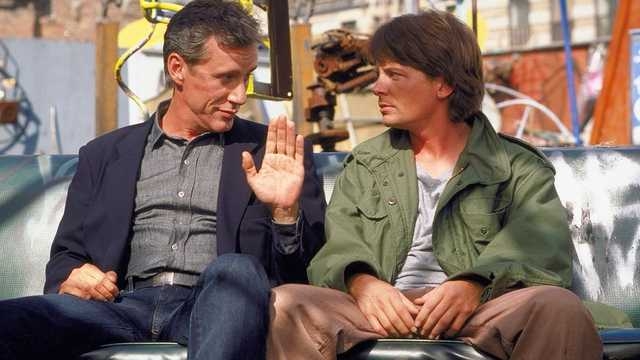 Despite a disappointing villain The Hard Way is a fun buddy cop film that has two great leads, solid direction by John Badham, moves at a good pace and is never boring.

Plot: Nick Lang is a famous Hollywood actor, well known for his action movies. For his next movie, he needs the proper motivation and inspiration for his role. Thus he teams up with the reluctant New York policeman Lt. John Moss. Not only does he have to put up with Nick, who is laborious and out of touch with realities, but he also has to catch a coldblooded murderer.

Review: This is a fun and underrated action film that pairs two leads that I never thought I needed, but I’m glad it happened!

Michael J. Fox does a great job as Nick Lang, who’s not only likeable, but also believable as some actors are like this. James Woods is a great counter to Fox; I always love seeing him on screen.

The action when it’s there is pretty decent;  there’s a solid car chase in the beginning which is the most memorable one, as there’s not a lot of action in it if that’s what you’re looking for.

There are a lot of familiar faces that pop up throughout, including Luis Guzman, LL Cool J, Delroy Lindo, Penny Marshall, and even a young Christina Ricci which I forgot about until I rewatched this.

My only big problem with this film is the villain played by Stephen Lang; to me, he’s way too over the top and it feels out of place with the rest of the film. I usually like my villains to be over the top, but not like this.

Overall, The Hard Way is a fun buddy cop film that has two great leads, solid direction by John Badham, moves at a good pace and is never boring. I just wish they had a villain that was better written.