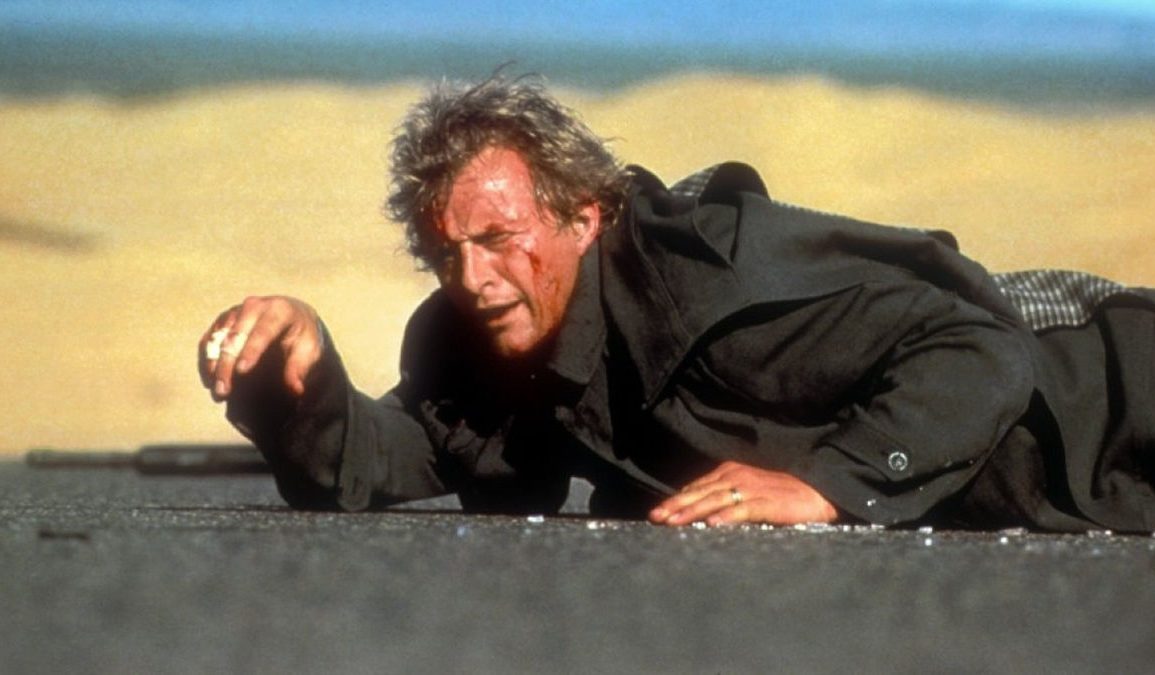 As per the Hollywood playbook, it was remade in 2007, but take my advice – stick with the original and enjoy the ride.

Plot: A young man who escaped the clutches of a murderous hitch-hiker is subsequently stalked, framed for the hitcher’s crimes, and has his life made into hell by the same man he escaped.

Review: This film at its essence is a ‘road movie’. Our hero Jim Halsey (C. Thomas Howell) is a young man eager to leave Chicago and get to San Diego via a ‘drive away’. (Delivery of a car to a buyer or to a specified destination by means of a hired driver.) On his way he starts feeling sleepy and spots a hitchhiker standing in the rain. Against his better judgement, but needing some conversation to keep him from drifting off, he decides to stop for this wayward traveler who identifies himself as John Ryder (Rutger Hauer). This of course is when all hell breaks loose.

The Hitcher has always been one of my favourite films from the 80s. Clearly inspired by Steven Spielberg’s 1971 classic ‘Duel’, it really is a non-stop thriller, giving you little time to ever catch your breath before the action starts up again. Even with some of the subtle devices used to build pathos, it is an effective class in building and holding tension without having to have anything particular happen.

Gene Siskel in the Chicago Tribune stated in his 1986 review, that The Hitcher is “a nauseating thriller that reaches down from the screen and defies you to stay in the theater to see what desecration of the human body it will present next.”. Pretty harsh words for a film where almost all of the violence happens off screen and leaves it up to the viewer’s imagination to create it’s own gore. With the exception of a few profanities, I am sure this film could run on TV in prime-time with no edits at all. It is what you don’t see that impacts you the most.

C. Thomas Howell, fresh off a supporting role in ‘Red Dawn’, is well cast as the protagonist. He progresses from innocent and scared at the start of the film, into angry and vindictive by the end. This evolving is well paced and believable considering the hell that he is put through.

Jennifer Jason Leigh has a smaller role as Nash, a truck stop waitress who eventually comes to believe Jim’s claim of innocence. She and Howell have great on screen chemistry, perhaps in part due to their both starring earlier in ‘Grandview U.S A.’. (On a side note, Leigh also appeared with Rutger Hauer the year before in ‘Flash+Blood’). She parallels Jim’s desire to be on the road to somewhere else and may see helping him as a way out of her one horse town.

The person who really steals this film though is Rutger Hauer. There is evil and then there is ‘Rutger Hauer evil’. He completely owns his character and is beyond creepy at word one. He is a madman, a murderer and maybe the Devil. He is the personification of pure evil and anytime he is on screen, even when subdued, he is captivating.  A large part of Hauer’s career has had him playing the bad guy, but no other role has had him portray such a total psychopath. He delights in testing Jim’s resolve and appears to be coaching him along to become the killer that Ryder is.

Directed by second time director Robert Harmon (Nowhere To Run), The Hitcher’s reviews were pretty much in line with the comments offered by Gene Siskel. His one time partner Roger Ebert awarded it no stars and wrote, “this movie is diseased and corrupt”. Thankfully though the movie found it’s audience and gained a cult status when released on home video.

As per the Hollywood playbook, it was remade in 2007, but take my advice – stick with the original and enjoy the ride.