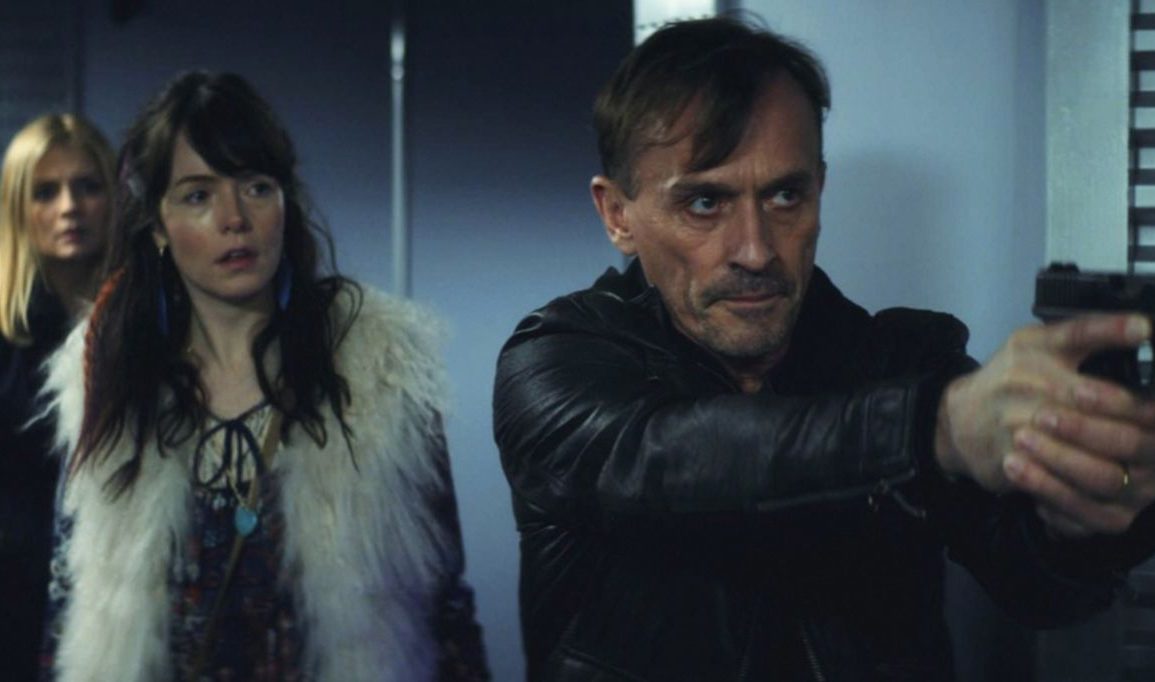 Part Aliens, part The Collector, and part Storage 24, The Hoarder is a suspenseful riff on the Twelve Little Indians concept, but with some action and startling gore.

Synopsis: A young woman enters an underground storage facility, where she soon finds herself trapped and stalked by a killer.

Review: Ella (Mischa Barton) and her bestie Molly (Emily Atack) suspect that maybe Ella’s fiancé is cheating on her, and so they get the idea to secretly check out his storage unit at a storage warehouse in the boondocks outside of the city. They con the night manager to let them in, and thus begins their terrible night. They end up in the basement of the facility, and right away they venture down the wrong path and end up in a doom chamber of some kind of ghoul who snatches Molly and disappears into the darkness. Ella jumps back, dashes for the elevator and goes a floor up, only to bump into a cop named Vince (the always welcome Robert Knepper), whose presence is both fortuitous and unwarranted. He’s packing heat, but he doesn’t believe Ella’s far-fetched story, and when they bump into several other people who are visiting their storage units – like the diabetic Willow (Valene Kane) and a bickering couple teetering on the brink of divorce, Ella’s story starts to make sense when another guy who’s been living in his storage space ventures out of the shadows to tell them that something strange has been going on in the warehouse for a long time. And then the ghoul jumps back into the picture, showing itself, and then the game is on as the group of people try to find their way out of the place before The Hoarder finds them and adds them to his collection.

Part Aliens, part The Collector, and part Storage 24, The Hoarder is a suspenseful riff on the Twelve Little Indians concept, but with some action and startling gore. It’s set in one central location (that’s admittedly pretty creepy to begin with), and the characters, though sometimes overwritten with bad dialogue, are killed off or stowed away for later usage to fuel the simple plot, which is what these kinds of movies are all about. If you like your action a little on the horror end of things, then check out The Hoarder. It kept me watching and I was never bored. So there you go. Directed and co-written by Matt Winn.