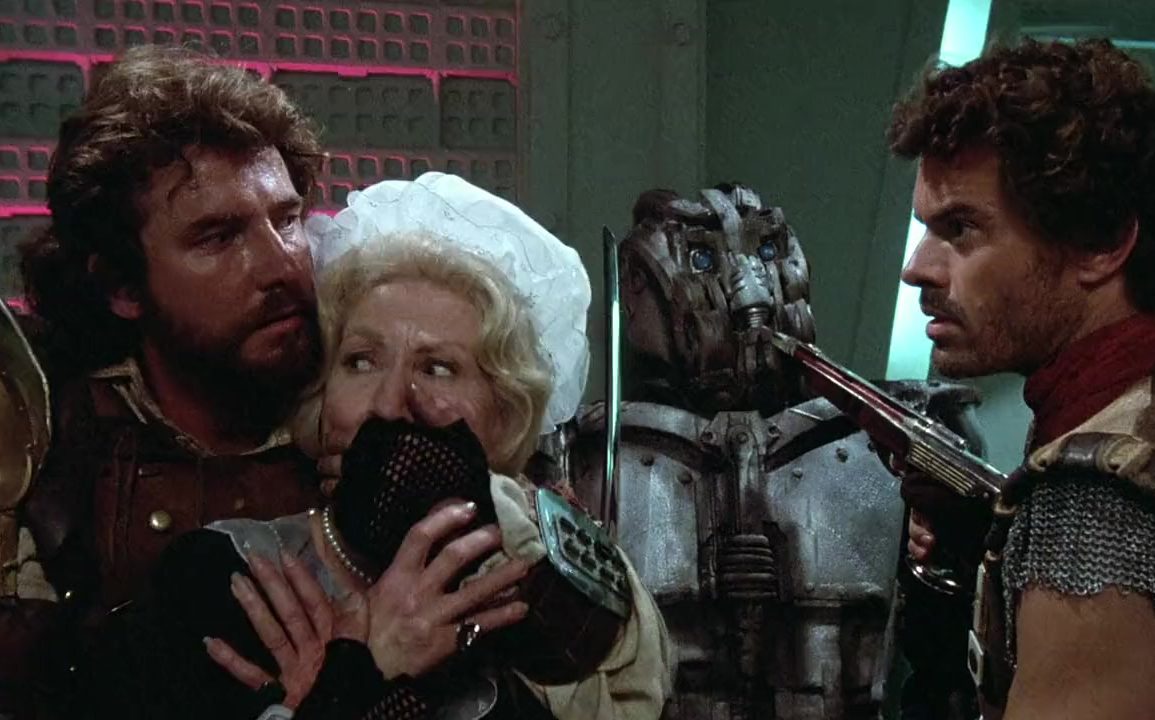 This release is a good example of when a movie was never intended to be digitally restored and displayed on a huge television in high def. That said, the movie hearkens back to an innocent era when movies like this were made quite often. How I miss those days.

Synopsis: Two space pirates are captured, sold to a princess, and recruited to help her find her father who disappeared when he found information dangerous to the rulers. A real Space Opera with sword fights, explosions, fighting robots, monsters, bar fights and time warps.

Review: In the far future, mankind is bereft of water, the most valued substance in the universe. A space pirate named Jason (Robert Urich) and his crew (including Michael D. Roberts, Anjelica Huston, John Matuszak, Ron Perlman, and some robots) come upon a space station full of ice blocks, which they intend on stealing, but instead they kidnap a princess living in hibernation – a beauty named Karina (Mary Crosby). This does not bode well with the despots who run the station (and pretty much the universe too), so Jason and his fully loaded crew go on the run with their captive, who turns around and betrays them and sells Jason and his partner Roscoe (played by Roberts) to be slaves. As slaves, Jason and Roscoe must go through the wringer (and are almost castrated and brainwashed) to escape, and finally when they reunite with their crew, it’s a swashbuckling adventure after all as they make their way to a fabled, water-filled planet … called Earth.

Big, sloppy, and fun, The Ice Pirates is kinda similar to the post-apocalyptic films Spacehunter: Adventures in the Forbidden Zone, Metalstorm: The Destruction of Jared-Syn, and most of all Michael Jackson’s short film Captain EO, which is a striking mirror image to this movie. The Ice Pirates is good fun in a Heavy Metal sort of way (albeit, in a PG fashion), but writer/director Stewart Raffill (who did Mac and Me and Standing Ovation) doesn’t really know what to do with all the makeup effects, special effects, or apocalyptic looking settings. Most of the time, you see the clumsiness of his direction, and there’s never a smooth transition between scenes.

Warner Archives has just released a great looking on-demand Blu-ray of The Ice Pirates, and the movie looks so good you can literally see the flaws of the special effects and makeups in high definition. This release is a good example of when a movie was never intended to be digitally restored and displayed on a huge television in high def. That said, the movie hearkens back to an innocent era when movies like this were made quite often. How I miss those days.